US envoy for Syria Jim Jeffrey tells the German Marshall Fund that a residual force of US troops will be staying in northeastern Syria for an "indeterminate time"; this decision appears to have been made in part to protect the Syrian Kurdish People's Protection Units from Turkey. 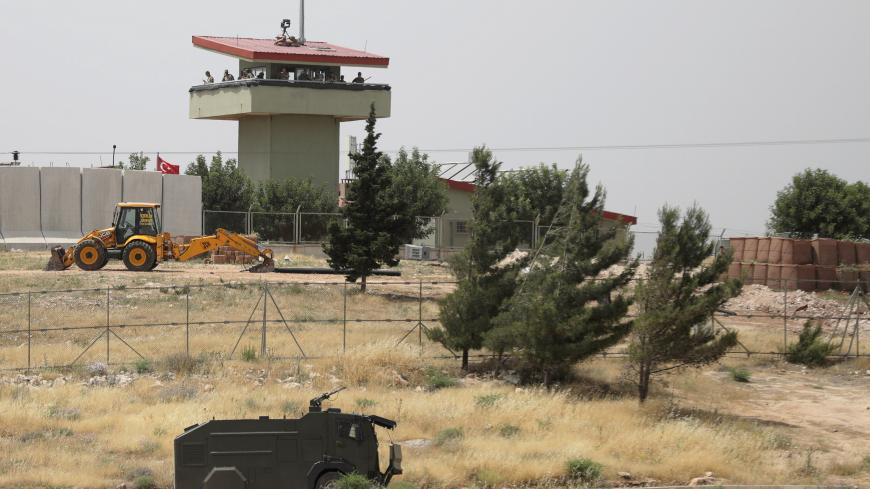 Turkish soldiers stand on a watchtower at the Atme crossing on the Syrian-Turkish border, as seen from the Syrian side, in Idlib province, Syria, May 31, 2019. - REUTERS/Khalil Ashawi

As Turkey and the United States continue to spar over the imminent arrival of Russian made S-400 missiles on Turkish soil, and more recently over Turkish moves in the eastern Mediterranean, a long-running quarrel over US support for Kurdish militants in Syria seems to have been put on the back burner — for now.

It may be that the NATO allies are so seized with the S-400s — with the United States threatening to unleash an array of sanctions and Turkey refusing to blink — that there is little room to squabble over Syria. More likely it is because their efforts to agree on a proposed safe zone along the Syria-Turkey border have hit a wall.

Jim Jeffrey, the Donald Trump administration’s top policy official on Syria, acknowledged the lack of progress without characterizing it as such in a brief but candid interview with the German Marshall Fund that was published this week.

Jeffrey made several things clear, none of which will please Turkey. For one, he stated, albeit elliptically, that US forces in northeastern Syria are staying indefinitely. Touching on Trump’s shock announcement in December that he had ordered the withdrawal of all troops from Syria, Jeffrey said, "It’s been reversed in the sense that, while the president is continuing with the withdrawal, his plan is to keep for an indeterminate time, a residual force in the northeast.”

Second, Jeffrey, a former US ambassador to Turkey who long aired sympathy for Ankara’s gripes about the US-backed Syrian Kurdish People’s Protection Units (YPG) being “the same thing” as the Kurdistan Workers Party (PKK) fighting Turkish troops in Turkey, struck a coolly neutral tone about this issue. He acknowledged Turkish concerns about the group, “given its ties to the PKK.” But he seemed to suggest that this was really Ankara’s problem. “We have certain obligations to the people who fought with us,” Jeffrey said of the YPG. The Kurds were at the fore of the Syrian Democratic Forces (SDF), the US proxy that defeated the Islamic State. “What we know is that they all fought with us and without them we would not have defeated the Islamic State. So, we want to ensure that they are not mistreated in some way. The safe zone is the best way to do this.” In other words, Jeffrey was confirming what Turkey has claimed all along, that the safe zone as envisaged by the United States, would essentially be to protect Kurds from Turkish attacks rather than the other way around.

This marks a change from the State Department’s oft-repeated mantra that the US alliance with the YPG was “temporary, transactional and tactical,” and that it would stop once the Islamic State was defeated.

Kadri Tastan, a senior fellow at the German Marshall Fund who conducted the interview, said, “The United States equates protecting the YPG/SDF against any Turkish, Russian or Syrian regime attacks with protecting its own interests.” Tastan told Al-Monitor, “Its clear that the Americans see the safe zone strictly in terms of border security. Turkey sees things differently.”

Turkey wants to take the lead in the proposed zone. Its main goal is to snuff out the YPG both politically and militarily. Jeffrey insisted, however, that differences with Ankara were mainly over the depth rather than the nature of the buffer zone, which he described as “a functional military accommodation.” Jeffrey said, “Turkey would like a deeper one; we would like a less deep one.”

Tastan said, “The differences in approach render any agreement elusive.”

“The truth,” said a source with close knowledge of the US-Turkish talks speaking not for attribution, “is that the safe zone stuff is dead.”

Nicholas Danforth, another German Marshall Fund fellow, told Al-Monitor, “Jeffrey’s comments don’t indicate that we’re closer to a resolution on the fundamental issues separating the United States and Turkey. But on the positive side, at least we aren’t any further [apart]. Despite the confusion, the United States still seems set on staying the course, and Turkey, at least for now, is focused on picking other fights.”

In a telling sign that the talks are effectively frozen, Jeffrey has ceased his frequent trips to Ankara, though he did meet with Turkish Defense Minister Hulusi Akar in Brussels in June. The last time the envoy traveled to Ankara was in April. This is probably because, as Tastan said, “The Americans believe that Turkey will not mount an attack for as long as its [US] troops are in northern Syria,” hence obviating the need for a safe zone.

Trump has taken credit for this turn of events. Following talks with Turkish President Recep Tayyip Erdogan on the sidelines of the G-20 summit in Osaka, Japan, last month, Trump said the Turkish leader “had a 65,000-man army at the [Turkish-Syrian] border, and he was going to wipe out the Kurds, who helped us with ISIS [the Islamic State]. … And I called him, and I asked him not to do it. … And he hasn’t done it.”