US national security adviser John Bolton left Ankara without a deal in hand that would protect Washington's allies from harm after the United States withdraws most of its troops from Syria. 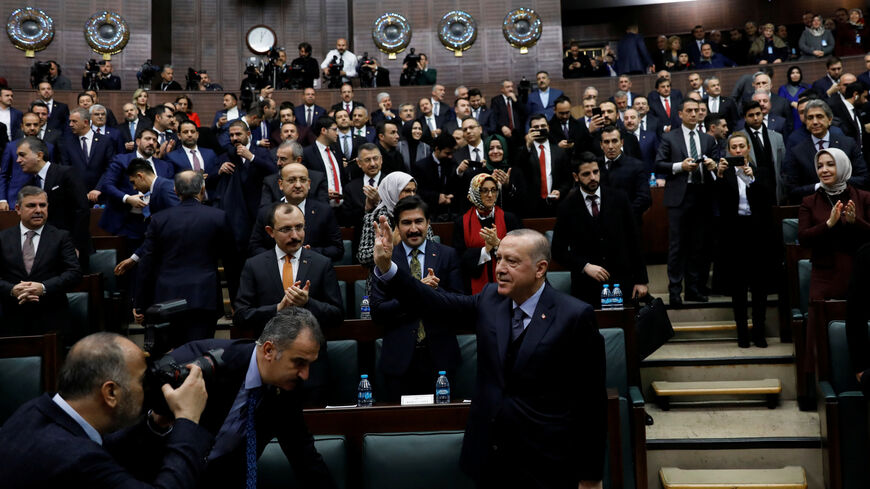 Turkish President Recep Tayyip Erdogan greets members of parliament from his ruling Justice and Developmen Party as he arrives at a meeting at the Turkish parliament in Ankara, Jan. 8, 2019. - REUTERS/Umit Bektas

ANKARA — Talks on Syria between the United States and Turkey foundered today, with national security adviser John Bolton flying away empty-handed and Turkish government officials facing the challenge of marching into northeast Syria despite the opposition from Washington, Moscow and the Damascus government.

After the two-hour negotiations between Bolton and Turkish presidential adviser Ibrahim Kalin finished, word leaked that there had been lots of tension and no agreement. The rumor appeared to be confirmed when President Recep Tayyip Erdogan canceled his photo opportunity with Bolton and Bolton canceled his press conference and went to the airport.

Not long afterward, Erdogan made his customary Tuesday address to his party’s legislators in parliament. He spoke of the People's Protection Units (YPG), a Syrian Kurdish militia; the Turkish Kurdish insurgent group known as the Kurdistan Workers Party (PKK); and the Islamic State (IS), also known by its Arabic acronym, DAESH.

“John Bolton made a serious mistake,” Erdogan said, adding, “For us, there isn’t the slightest difference between the YPG, the PKK and DAESH.”

The Americans do make such distinctions, however. Their 2,000 troops in Syria have fought against IS with the Syrian Democratic Forces (SDF), an Arab-Kurdish militia staffed predominantly by YPG members. Washington classifies the PKK as a terrorist organization, but not the YPG — even though they are sister organizations.

Bolton had set the stage for confrontation when on Sunday he told reporters: “We don’t think the Turks ought to undertake military action that’s not fully coordinated with and agreed to by the United States at a minimum … so they don’t endanger our troops, but also so that they meet the president’s requirement that the Syrian opposition forces that have fought with us are not endangered.”

Ankara was not going to take kindly to the view that it had to get Washington’s permission for a military operation. Nor was Turkey going to accept that the YPG was off limits just because it had fought with American troops.

As Bolton headed to the talks on Tuesday morning, Hurriyet newspaper reported that Turkey would be giving him a demand of its own: When it withdraws, the United States should hand over its 16 military and logistic bases in Syria to Turkey or regional authorities.

“We shouldn’t give opportunities to terror organizations such as the YPG during this withdrawal,” Kalin told reporters after the talks.

The failure of the talks leaves many issues unresolved. In the negotiations, Turkey asked Washington to take back the weapons that it provided to the YPG during the campaign against IS. These weapons were originally meant to be returned, but recently an American general was quoted as saying the Kurds should keep them.

Turkey fears the YPG will pass some of these weapons to the PKK and use them in Turkey. One could have citizens of one NATO country being killed by arms supplied by another.

The 16 US bases are valuable assets. If America does not dispose of them by dynamite or agreement, there will be a race to capture them among the Kurds, the government forces and, if they are within range, hard-line Islamic militias.

The biggest imponderable is whether Turkey will go it alone into northeast Syria. Today Erdogan made clear he was determined to do so. “Very soon, we will act on neutralizing terrorist groups in Syria, and we will take out other terror groups that might try to prevent us from doing this,” he said.

Such an offensive would be opposed by Washington, by Damascus — which wants to regain control of the northeast — and by Russia, which will dominate the airspace over northern Syria after the US withdrawal.

Moscow has said the Syrian government, in accordance with international law, should fill the gap left by the Americans’ departure. It has also proposed that Turkey’s security concerns could be met by the Syrian government troops occupying a buffer zone along the Turkish border, keeping the YPG away from the frontier.

The issue comes down to how strongly Russia supports Damascus in its ambition to restore its authority in northern Syria. Russian aircraft could blast Turkish tanks as soon as they roll across the border.

But Ozgur Unluhisarjikli of the German Marshall Fund in Turkey believes Russia would not take such steps.

“Russia has been very sensitive to Turkey’s policies,” he told Al-Monitor, adding that Russia seeks to draw Turkey away from the West.

Former Turkish envoy to the Iraqi Kurds and ex-Ambassador to Baghdad Murat Ozcelik believes Russia could dissuade Turkey from a major operation in Syria without using force.

“Without an agreement between Russia and Turkey, I don’t think Turkey [will] be in a position to do a big-scale operation [in Syria],” Ozcelik told Al-Monitor.

More likely than a full-blown offensive is that Turkey would enter Syria at border towns such as Tell Abyad, where Arabs rather than Kurds are in the majority, Ozcelik said. Such incursions would be much safer as Turkish forces would not encounter the hostility they can expect in the Kurdish majority zones.

Today the co-chairman of the Democratic Union Party (PYD), the political wing of the YPG, told the Associated Press that if Turkey enters northeast Syria, it would be opposed. “We will be ready,” Shahoz Hasan said, referring to Kurdish fighters.

Both Ozcelik and Unluhisarcikli think the lack of US and Russian support inevitably means that Turkey would have to scale down an intervention in Syria if it does intervene.

“It will be a small thing, but [the government] will exaggerate it for domestic purposes,” Ozcelik said. “They might say we have stopped, yet again, a Kurdish terrorist corridor [from being formed in Syria],” he said, referring to Turkey’s previous incursions into the Afrin and Jarablus districts of northern Syria.

One new fact emerged today that gives hope to those who would like to see northern Syria’s fate decided by international consensus rather than rivalry. Kalin told reporters that during his talks with Bolton, the Americans had said their withdrawal from Syria could stretch to 120 days. That is a month longer than the 60-90 days given when President Donald Trump announced the withdrawal on Dec. 19.

Ankara, Washington and Moscow have more than three months to get on the same page.