Fiasco in Ankara: Turkish-US friction on Syria back to square one

US national security adviser John Bolton was snubbed by Turkish President Recep Tayyip Erdogan because of the Trump administration's demands that Kurds not be harmed after the United States withdraws most of its troops. 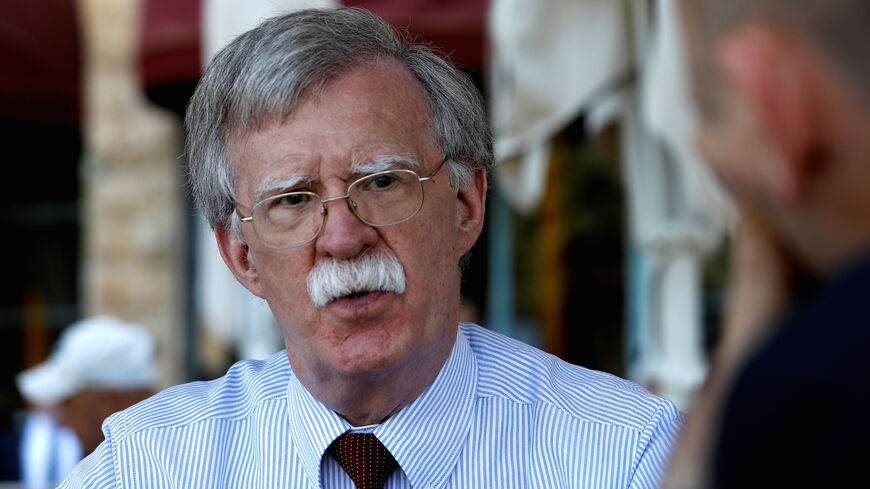 US national security adviser John Bolton speaks during an interview with Reuters in Jerusalem, Aug. 21, 2018. - REUTERS/RonenZvulun

US national security adviser John Bolton’s visit to Ankara was supposed to be a turning point in Syria’s foreseeable future and for Turkish-US relations.

It was — but not in the sense that was expected. No progress was made in relations between the two NATO allies — Turkey and the United States — which have become increasingly problematic regarding the Syrian theater. On the contrary, Bolton's visit could be deemed a diplomatic disaster.

That could be the mildest way of interpreting what happened in Ankara when Erdogan apparently humiliated Bolton. In a way, Bolton and the accompanying delegation — which included US Chairman of the Joint Chiefs of Staff Gen. Joseph Dunford and James Jeffrey, the US special representative for Syria and special envoy for the anti-Islamic State coalition, a title he recently inherited from the former envoy, Brett McGurk — made up the highest level of American policymaking that could be dispatched to any capital.

Refusing to receive the American delegation, Erdogan instead assigned his spokesman, Ibrahim Kalin — whose merit was his good command of the English language and who had nothing to do with policymaking — to meet with the American trio.

While the meeting of Bolton, Jeffrey and Dunford was underway in the presidency complex, Erdogan left and went to the Turkish parliament to speak at his party’s meeting, where he lambasted Bolton.

Referring to Bolton’s statement in Israel on his way to Turkey regarding Kurdish groups in northern Syria, Erdogan roared, “Bolton has made a serious mistake, and whoever thinks like this has also made a mistake. It is not possible for us to make compromises on this point.”

Erdogan was adamant about expressing Turkey's intention to fight the very elements Bolton wanted to protect as the US national security adviser sought to obtain Turkey’s commitment to their security. “We will very soon mobilize to eliminate terrorist organizations in Syria,” Erdogan said, referencing the Kurdish People’s Protection Units (YPG), a group that has helped the United States turn back the Islamic State.

“I hope that he got a taste of the world-famous Turkish hospitality during his visit," Fahrettin Altun, head of communications for the Turkish presidency, wrote on Twitter after Bolton left Ankara empty-handed.

In the world of diplomacy, rarely would such an insulting assessment from an official of the host country be recorded. He also wrote on Twitter, “Turkey’s national security is non-negotiable,” indicating the total failure of talks with the American side.

Erdogan apparently tried to create a wedge between Trump and his aides. “Although we made a clear agreement with US President [Donald] Trump, different voices are emerging from different parts of the administration,” the Turkish president said, addressing his party’s parliamentarians while Bolton was in the meeting with Kalin. "Trump’s remarks continue to be the main point of reference for us," he added.

Some in the United States are also critical of Bolton’s stance.

Bloomberg news service quoted Aaron Stein, director of the Middle East program at the Foreign Policy Research Institute in Philadelphia, as saying that some US policymakers want "to turn US positions over to Turkey and reach some broader compromise" that would make the Kurds' continued hold over a small area of Syria more palatable to Turkish officials. Stein said Bolton instead blown up the talks with his rhetoric.

This broader compromise was part of a plan prepared by Jeffrey. A former ambassador to Ankara, Jeffrey is known to be the most pro-Turkish element in the American administration.

Nicholas Danforth, a senior analyst who specializes in Turkish affairs for the Bipartisan Policy Center in Washington, tweeted, "Mr. Jeffrey and his State Department team have created a color-coded map of northeastern Syria in an attempt to negotiate a power-sharing plan that could avert a costly Turkish-Kurdish fight in the area. One former US official described it as 'Sykes-Picot on acid…'" Sykes-Picot was a secret 1916 French-British agreement to divide Ottoman lands at the end of World War I.

The US plan was unconvincing from the beginning, particularly for Turkey, as anything that would keep the Syrian Kurdish Democratic Union Party in governance and guarantee the YPG’s survival is a nonstarter.

Turkey has its own plan, which was revealed in an op-ed piece that Erdogan wrote for The New York Times on Jan. 7 titled “Erdogan: Trump is Right on Syria. Turkey Can Get the Job Done” — a clear indication of Erdogan's wish to play the game with Trump. The gist of Erdogan's proposal lies in the following paragraph: “The first step is to create a stabilization force featuring fighters from all parts of Syrian society. Only a diverse body can serve all Syrian citizens and bring law and order to various parts of the country. In this sense, I would like to point out that we have no argument with the Syrian Kurds. Ensuring adequate political representation for all communities is another priority. Under Turkey’s watch, the Syrian territories that are under the control of the YPG or the so-called Islamic State will be governed by popularly elected councils. Individuals with no links to terrorist groups will be eligible to represent their communities in local governments. Local councils in predominantly Kurdish parts of northern Syria will largely consist of the Kurdish community’s representatives while ensuring that all other groups enjoy fair political representation. Turkish officials with relevant experience will advise them on municipal affairs, education, health care and emergency services.”

This is, in short, a YPG-free northern Syria to be governed by the same administrative models established in Afrin, Jarablus and al-Bab by Turkey after two military operations.

Those proposals may also not convince US Secretary of State Mike Pompeo. While defending Trump’s decision on the withdrawal, his wording caused Turkish outrage: “Not only the withdrawal," Pompeo said, "but all other elements the president laid out — the importance of ensuring that the Turks don’t slaughter the Kurds.”

Bolton apparently continued to be forceful in his remarks in Ankara. Turkish social media rapidly circulated a Reuters story quoting an unnamed American official involved with the talks as saying Bolton had told his Turkish audience that Erdogan’s New York Times piece was “wrong and offensive.” In the meeting, which lasted more than two hours, Bolton delivered the American demands that the Kurds not be mistreated.

That means that the American delegation's visit to Ankara turned out to be a confrontation between the incompatible positions of Turkey and the United States on Syria.

In the aftermath of Bolton’s mission, the two countries have once again reached a crisis point. Erdogan will be waiting for Trump to overrule his aides, who provoked the ire of the Turks.

Will Erdogan make the audacious move and send more Turkish armed forces into Syria to fight against the YPG, which Bolton and the Pentagon’s partners on the ground warn against?

A Jan. 4 Wall Street Journal report indicates that Turkey seeks substantial American military support to undertake a larger mission in Syria. The story says, “Turkey is asking the US to provide substantial military support, including airstrikes, transport and logistics, to allow Turkish forces to assume the main responsibility for fighting Islamic State militants in Syria, senior US officials say.”

After the Ankara fiasco, Turkish-American relations and the near future of Syria and its Kurds hang on the unpredictability of Trump and the limits of Erdogan's adventurism.