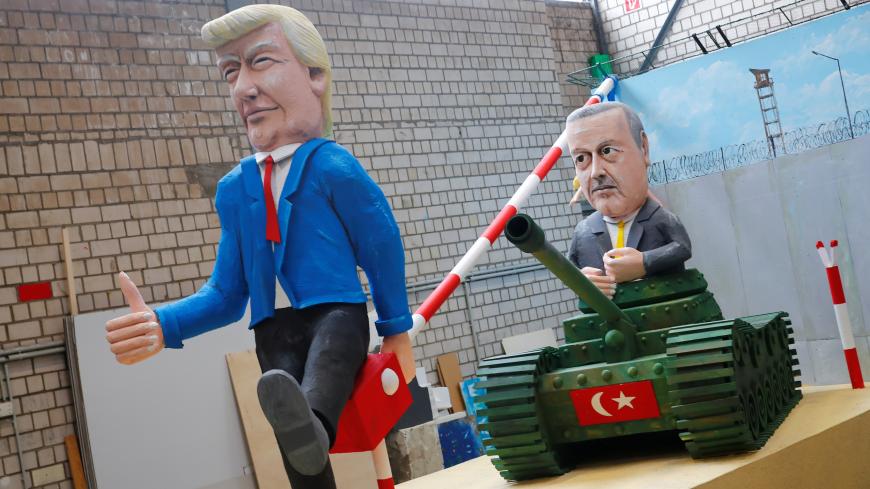 US President Donald Trump is depicted with Turkey's President Recip Tayyip Erdogan, who sits on a tank, during a sneak preview for the Rose Monday carnival parade in Cologne, Germany, Feb. 18, 2020. - REUTERS/Wolfgang Rattay

As expected, in his 577-page memoir titled “The Room Where It Happened: A White House Memoir,” Bolton describes Erdogan as a “dictator,” likening him to Italy’s fascist leader Benito Mussolini. Bolton provides a first-hand account of several phone calls between Erdogan and US President Donald Trump.

“The Erdogan call turned out to be an experience. Listening to him (his remarks were always interpreted), he sounded like Mussolini speaking from his Rome balcony, except that Erdogan was talking in that tone and volume over the phone. It was as if he were lecturing us while standing on the Resolute desk,” he wrote.

Emphasizing Trump’s tendency to favor “autocrats,” Bolton says Erdogan's phone calls with Trump were very effective in getting the American president to do what he wanted.

The legal case against the state-run Halkbank stands out as a striking example, Bolton argues. Halkbank and its high level officials are being tried in a US court for helping the Iranian administration evade Washington's sanctions on Tehran.

The US president personally promised to try to help his Turkish counterpart with the case, Bolton says, citing a meeting between Erdogan and Trump in Argentina on Dec 1, 2018, on the sidelines of the G20 conference.

“Erdogan provided a memo by the law firm representing Halkbank, which Trump did nothing more than flip through before declaring he believed Halkbank was totally innocent of violating US Iran sanctions. Trump asked whether we could reach Acting US Attorney General Matt Whitaker, which I sidestepped,” the former aide writes. “Trump then told Erdogan he would take care of things, explaining that the Southern District prosecutors were not his people, but were [Barack] Obama people, a problem that would be fixed when they were replaced by his people.”

"The pattern looked like obstruction of justice as a way of life," Bolton adds, describing Trump’s dealings with Erdogan.

"Mr. Bolton alleges Mr. Trump sought to accommodate a request by Turkey's President Recep Tayyip Erdogan 'to show he had as much arbitrary authority' as the Turkish leader," reads the caption of an image of Trump and Erdogan accompanying a WSJ story.

The memoir also reveals this influence has been a source of concern for several European leaders including French President Emmanuel Macron. According to the book, Trump decided to withdraw American troops out of Syria in December 2018 after a phone call between the two leaders and consequently asked Bolton to “work it quietly.” Bolton writes that in a later phone call with Macron, Trump ignored the French president’s warnings about the Islamic State and the fate of Kurdish fighters allied with the United States and NATO against the jihadist group.

“Trump brushed [Macron] aside, saying we were finished with [IS], and that Turkey and Syria would take care of any remnants,” Bolton said. “Macron replied that Turkey was focused on attacking the Kurds, and would compromise with [IS].”

Macron’s concerns were echoed by US Secretary of State Mike Pompeo, says Bolton. “Erdogan doesn’t care about [IS],” Bolton wrote, adding that he and Pompeo agreed that the views of the United States and Turkey on the Kurds were “irreconcilable.”

“Erdogan took pains to say he loved the Kurds and vice versa,” he writes. Accordingly, Erdogan also told Trump that the Kurdish groups groups in Turkey and Syria that Ankara considers terrorist organizations “were manipulating the Kurds, and did not represent them.”

“We had heard all this before, and it was standard Erdogan regime propaganda,” Bolton adds, recounting how Erdogan sought to reassure Trump about his treatment of the Kurds.

Bolton's explosive book has confirmed my categorization of the relationship between Erdogan and Trump as “soulmates.”

A statement by Turkish Foreign Minister Mevlut Cavusoglu confirming the exceptionally close relationship between the two coincided with Bolton's book. On his return from an unscheduled visit to Libya, Cavusoglu said that Trump endorsed the close working relationship between Ankara and Washington on Libya, adding that Erdogan instructed him to work with the United States on the Libyan conflict.

Following his phone conversation with Trump on June 9, Erdogan also said the conversation marks a “new era” in the ties between Turkey and the United States.

Meanwhile, Turkey seems to be on an ever straighter collision course with some European Union countries, particularly France, in regard to its policies in Libya and the Eastern Mediterranean. The latest skirmish on June 10 between Turkish frigates and the French navy off the Libyan coast could have led to a dangerous confrontation.

According to Marc Pierini, a former EU ambassador at Ankara, “Faced with no shortage of domestic challenges, Erdogan is expanding Turkey’s role in the Eastern Mediterranean and antagonizing Europe in turn.”

Given the tensions with some European countries and looming troubles with Russia on Libya and Syria, Erdogan has nowhere to go but ever closer to Trump. But there lies danger: Trump’s closest allies would also be adversely affected by any damage inflicted by the book on the US president inside and outside the country. It may further challenge Erdogan’s expansionist foreign policies, given the domestic challenges, particularly economic, he faces at home.

Reading in between the lines of Bolton’s revelations about Trump, if Erdogan loses his most reliable crutch, his political survival will also be jeopardized.

by Murielle KASPRZAK and Joseph SCHMID | AFP | May 26, 2022
END_OF_DOCUMENT_TOKEN_TO_BE_REPLACED