Ankara has criticized the former US national security adviser’s descriptions of President Donald Trump’s discussions with his Turkish counterpart, accusing him of publishing the book for his own personal gain. 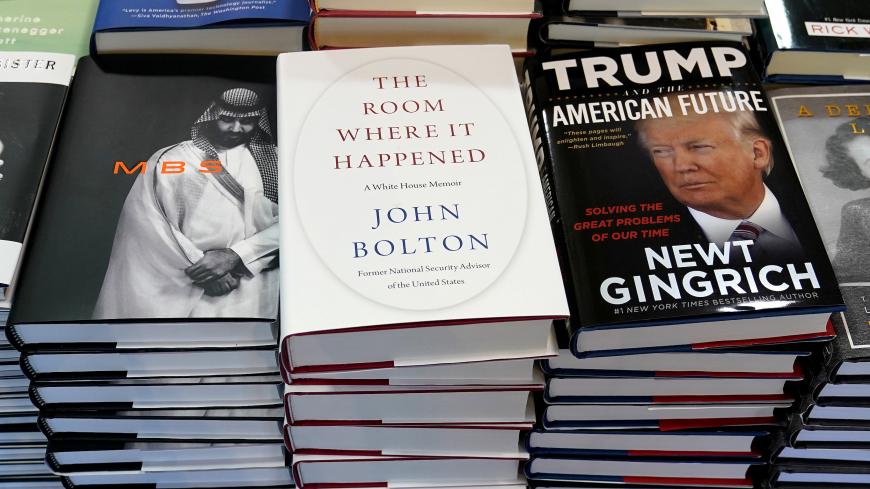 Copies of John Bolton's book "The Room Where It Happened" are pictured on display at a Barnes and Noble bookstore in the Manhattan borough of New York City, New York, US, June 23, 2020. - REUTERS/Carlo Allegri

ISTANBUL — Turkey slammed a tell-all memoir by former US national security adviser John Bolton that included revelations about discussions between the two countries’ leaders, saying it contained “manipulative” depictions of President Recep Tayyip Erdogan, who has always been “straightforward” about his dealings with the US administration.

On Tuesday Bolton, who served as President Donald Trump’s chief adviser on national security affairs until September 2019, published “The Room Where It Happened,” a blunt account of the US president’s conduct with foreign leaders during Bolton’s 17 months in the job. Trump has accused his former aide of both lying and revealing classified information.

In the book, Bolton asserted that Erdogan had won a pledge from Trump to intervene on his behalf in US legal proceedings against Halkbank, a Turkish state bank that has since been indicted in New York for allegedly helping Tehran dodge sanctions for its nuclear program by moving about $20 billion in Iranian energy revenues.

He also wrote about Trump’s defiance of Congress by refusing to impose sanctions on Turkey for its purchase of an advanced Russian antiaircraft system and how Erdogan convinced him to pull US forces out of northeastern Syria in December 2018, two matters widely covered by the media.

“Recent publication of a book authored by a high-level former US official includes misleading, one-sided and manipulative presentations of our leader President Erdogan’s conversations with the US President Donald Trump,” Fahrettin Altun, a senior adviser to Erdogan, said in a series of tweets late on Wednesday, accusing the author of pursuing his own “domestic political agendas” with the book.

Yet Altun did not reject Bolton’s core allegations: that Erdogan had firmly pressed for and often won Trump’s support on a litany of disputes between the two NATO allies. Indeed, the Turkish president has never made a secret of his efforts to win over Trump to settle disputes that have plunged US-Turkish relations into a series of diplomatic crises in recent years.

“President Erdogan, at every opportunity, clearly outlines Turkey’s priorities and advocates for them vigorously … both publicly and privately,” Altun said.

Trump has called himself a “great fan” of Erdogan, and the personal nature of their relationship has helped Erdogan achieve some foreign policy goals, perhaps most notably Trump’s acquiescence and withdrawal of American soldiers fighting the Islamic State in Syria in October, paving the way for Turkey and Russia to enter and push out US-allied Kurdish fighters.

While the case against Halkbank continues, Trump’s attorney general dismissed the prosecutor overseeing the litigation last week after Bolton’s manuscript was leaked to the press, detailing Trump’s promise to Erdogan in late 2018 that “he would take care of things” by replacing the prosecutors on the case with “his people.”

But a laundry list of challenges continues to afflict the relationship. The US Congress continues to threaten sanctions for Turkey’s purchase of the Russian S-400 missile system, designed to shoot down NATO aircraft. It hasn’t begun operating the weapons since taking delivery of the missiles in December.

Two weeks ago, an Istanbul court sentenced a Turkish employee of the US consulate to almost nine years in prison for aiding an “armed terrorist organization.” Metin Topuz, in custody since October 2017, has been described as a political hostage.

“Things may not be as bad as they were … but it’s not all cosy” between Ankara and Washington, said Soner Cagaptay, the director of the Turkish research program at the Washington Institute for Near East Policy. Turkey has plenty of critics in Congress, especially over its human rights record, and defense policy-makers remain distrustful after the incursion into Syria and Erdogan’s cultivation of ties with Russian President Vladimir Putin, he said.

“We haven’t seen a complete rupture, because Trump really does care for Erdogan and for Turkey,” Cagaptay told Al-Monitor. “For Trump, Erdogan is a dealmaker … with whom he can do business as a bilateralist and not through the messy mechanisms of multilateral international institutions.”

Cagaptay also pointed to Turkey’s recent success in supporting the internationally recognized government in Libya against a rebel commander backed by Russia as an “alignment of interests” with Washington. Erdogan said June 8 after a call with Trump that the two countries are embarking on a new era in their relationship over the conflict in Libya.

Erdogan and Trump “have expended great effort to repair and keep stable the US-Turkey relationship despite deep differences and despite some hostile voices toward Turkey in Washington,” Altun said on Twitter. He praised Trump for doing “a lot more listening” to Turkey than his predecessors and said Erdogan would “continue his frank, honest and straightforward conversations” with Trump.

In “The Room Where It Happened,” Bolton does throw some shade on Erdogan, comparing his tone on a phone call to “Mussolini speaking from his Rome balcony” and calling him a “radical Islamicist.” He describes Trump’s relationship with Erdogan as a “bromance with yet another authoritarian foreign leader.”

Democrats are following up on Bolton’s allegations on Halkbank, including the senior opposition members of the Senate’s Foreign Relations and Finance Committees. But this week the chairman of the House Judiciary Committee called another impeachment probe of Trump over Bolton’s claims a “waste of time and effort” ahead of the Nov. 3 presidential election.

Like the rest of the world, Turkey is keeping a close eye on the US campaign between Trump and his Democratic challenger, former Vice President Joe Biden. Trump has said that his predecessor, Barack Obama, was unfair to Turkey.

“Erdogan would really like to see Trump win a second term, but he’s a chameleon … who has been able to frame himself [as what] US presidents want to see,” said Cagaptay. “He can do this for a President Biden as well.”