The local council of Manbij has denied Ankara's claim that Turkish forces will enter the city and conduct joint patrols with US forces, saying Turkey is looking for an excuse to keep a presence there. 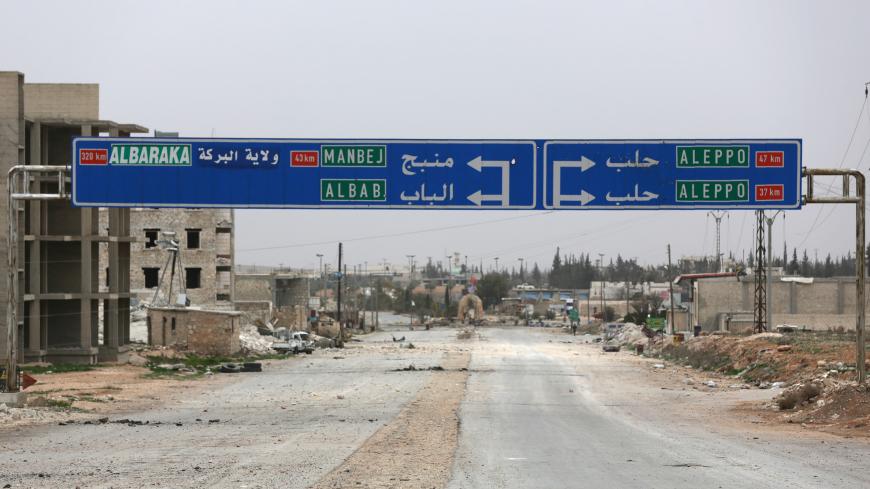 A road sign that shows the direction to Manbij is seen in the northern Syrian town of al-Bab, March 1, 2017. - REUTERS/Khalil Ashawi

The co-chair of the Manbij Legislative Council rebutted claims that Turkish forces will enter the mainly Arab Syrian city under the terms of a road map agreed between Turkey and the United States. Speaking to the pro-Kurdish Hawar News Agency, Farouk Al-Mashi said, “What they claim about the road map regarding their entry to Manbij is nothing but baseless allegations.” The official stated that the situation in Manbij was stable and that Turkey was seeking “pretexts” to intervene in the northern Syrian city.

Al-Mashi was responding to a Sept. 21 statement by Turkish presidential spokesman Ibrahim Kalin about the implementation of the Manbij road map endorsed in June to pacify Turkish concerns about the dominance of the pro-Syrian Kurdish People’s Protection Units (YPG) over Manbij.

Kalin claimed that Turkey and the United States were on the verge of launching joint patrols in Manbij, saying, “The work on joint patrols in the Manbij area is almost complete. The Turkish Armed Forces coordinates this on the ground with its American counterparts. Those patrols and joint training will begin soon.” He added that it was unacceptable that the United States was pursuing its partnership with the YPG.

Turkey equates the YPG with the Kurdistan Workers Party (PKK), the Kurdish rebel group that is fighting for self-rule inside Turkey and accuses the United States of reneging on its promise to evacuate the YPG once Manbij was liberated from the Islamic State in August 2016. Lying to the west of the Euphrates River, Manbij is in Turkish eyes a bridgehead for the YPG to link up the vast swath of territory it controls east of the river with the mainly Kurdish enclave of Afrin bordering Turkey. It is one of the main reasons Turkey invaded northern Syria, seizing control in turn of Jarablus, al-Bab and more recently Afrin.

Erdogan repeatedly aired Turkish anger over the continued partnership between the Pentagon and the YPG earlier this week in New York, where he joined world leaders at the inauguration of the 73rd session of the UN General Assembly. “Think of our strategic partner engaging in such acts … it's wrong,” he told PBS Newshour on Wednesday.

In an apparent rebuttal of Turkish claims that the YPG continues to run Manbij, Al-Mashi insisted that the people of Manbij still control the administration of their area. He explained, "The Legislative Council, the Executive Council, the Social Justice Council, the youth and women [councils] are all from Manbij city and even the journalists are from the city itself.”

Al-Mashi’s tirade reflects the nebulous nature of the road map and Turkey’s desire to exploit it. Kalin did not specifically state that any joint patrols would be taking place in Manbij city proper. And the road map, at least as per the Pentagon’s interpretation of it, precludes such patrols, as stated by Pentagon spokesman Eric Pahon in an interview with the Turkish daily Hurriyet. Rather, the joint patrols are supposed to be along the front line between the Turkish-controlled Euphrates Shield zone and Manbij, where the independent patrols carried out in coordination between Turkish and US forces are already taking place.

But Turkey continues to push for access to the city and may be finding a more receptive audience among the Donald Trump administration’s new Syria team led by high-flying former ambassador to Turkey Jim Jeffrey, who has Erdogan’s ear. Jeffrey is flanked by Deputy Assistant Secretary for Levant Affairs Joel Rayburn, who is also special envoy for Syria, and Senior Adviser for Syria Engagement Richard Outzen. The latter is credited with designing and ramming through the Manbij road map.

The trio is said to be “prioritizing” Turkish interests in northern Syria in a bid to repair strained relations between the NATO allies.

But maintaining an indefinite presence in northern Syria with the help of the Kurds in order to defeat IS and roll back Iranian influence while simultaneously promoting Turkish interests are incompatible goals. This will certainly be true for as long Turkey remains at war with the PKK. There is no evidence to suggest that Ankara is interested in resuming the peace talks that collapsed together with a two-and-a-half-year cease-fire amid mutual recriminations in 2015.