The Pentagon’s Kurdish allies could get shut out as the United States and Turkey move closer to a deal to settle a dispute over the contested Syrian city of Manbij. 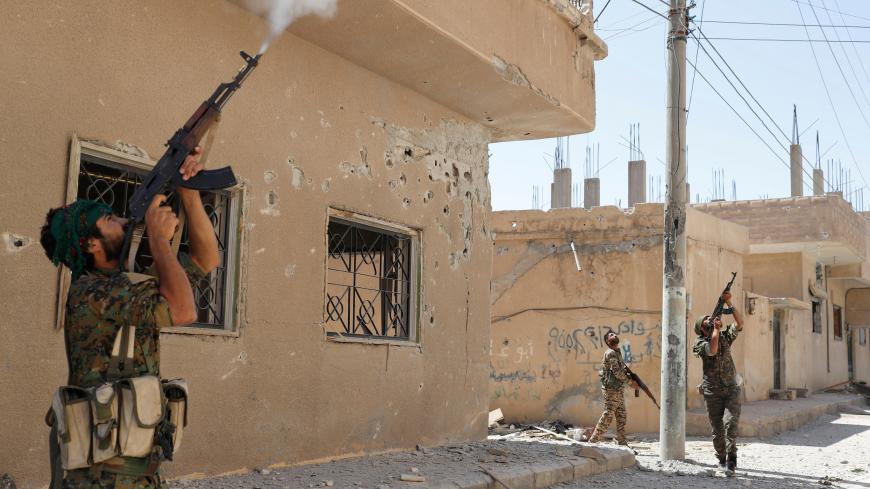 With the United States and Turkey agreeing on a road map for settling a longstanding dispute in the contested Syrian city of Manbij, experts warn that Pentagon-backed Kurdish groups could get boxed out.

Following a meeting today between Secretary of State Mike Pompeo and Turkish Foreign Minister Mevlut Cavusoglu in Washington, the State Department issued a joint statement saying that both sides planned on “taking steps to ensure the security and stability” in the one-time Islamic State (IS) bastion west of the Euphrates River. The statement offered no specifics, but a Turkish government spokesman said today’s meeting included an agreement on a timetable for withdrawing US-allied Kurds from Manbij, a sticking point that has strained ties with Washington.

Jim Jeffrey, a former US ambassador to Turkey, told Al-Monitor that the deal calls for removing cadres from the Kurdish Democratic Union Party (PYD) within 90 days. Among the sticking points are how locals will secure the area and whether PYD sympathizers will be allowed to stay.

“The problem is, we don’t know where the PYD [stands],” said Jeffrey. “The local US command really like them.”

After the meeting, Cavusoglu told reporters that the goal of the road map was “the clearing of Manbij of all terror organizations and the permanent [re]instatement of safety and stability.” The first step, he said, was determining “parameters for common plans for the removal” of the PYD’s armed wing, the People’s Protection Units (YPG), a key US ally against IS that Ankara considers a terrorist group.

Ever since then-Vice President Joe Biden called in 2016 for Kurdish elements to leave Manbij after the defeat of IS, Turkish rhetoric and posture have hardened. In 2017, pro-Turkish forces repeatedly fired on US convoys through Manbij, where some of the 2,000 US troops in Syria conduct patrols in with Arab and Kurdish forces.

Further complicating matters, the contested city is also home to some of the most battle-hardened units in the US-backed Syrian Democratic Forces (SDF), which includes the YPG and Arab units. These include the Manbij Military Council, an Arab-led group that has bought into the ideology of imprisoned Kurdish leader Abdullah Ocalan.

“The Turks look at the Manbij Military Council as exactly what they don’t want to see empowered,” said Nick Heras, a Middle East fellow at the Center for a New American Security.

But the Pentagon still faces trust issues with Turkey, fueled in part by lingering bitterness that Ankara slow-rolled US access to Incirlik Air Base for the anti-IS campaign in 2015. Though Turkey repeatedly pledged forces for the fight to take back the former IS capital of Raqqa, US officials said Ankara couldn’t raise enough troops for the battle, according to a report from the Atlantic Council, a Washington think tank.

With French troops now running joint patrols with US forces in Manbij, it appears likely that the Donald Trump administration is looking at Turkey as part of a wider military grouping to secure areas once held by IS, experts say.

“What [Trump’s] team wants to do is find an agreement with Turkey that doesn’t sell the SDF down the river but creates a larger northern Syria NATO zone,” said Heras. “The first big milestone on that road would be a working arrangement.”

The New York Times reported today that Gen. Tony Thomas, the commander of US Special Operations, faces pressure from US Defense Secretary James Mattis and US Marine Corps Gen. Joseph Dunford, chairman of the Joint Chiefs of Staff, to move elite US forces back into Europe to deal with the threat of Russia. Earlier this year, Thomas raised the possibility of reinforcing Manbij with more US troops after Turkish forces drove Kurdish militants out of nearby Afrin in March.

“I’ve got lieutenants … that we may push into that little area up north called Manbij just to keep the Turks from coming in,” Thomas told a West Point audience in March. “They don’t like the Kurds we’re dealing with, got it — but they’re undoing some of the work we’ve accomplished, and, more complicated, they’re a NATO ally.”

Even as Mattis turns the military’s focus away from the terror fight in the Middle East and toward emerging adversaries such as China and Russia, experts say Kurdish elements will need US security guarantees akin to the American-led no-fly zone over Iraq’s autonomous Kurdish region in the 1990s.

“We need an Operation Northern Watch again to ensure that no one uses air power to go after guys east of the Euphrates,” said Jeffrey, now with the Middle East Institute, a Washington think tank.