The Turkish-backed Free Syrian Army factions are getting ready to manage Tal Rifaat and Manbij in the countryside of Aleppo after expelling the Kurdish forces following an expected Turkish military operation. 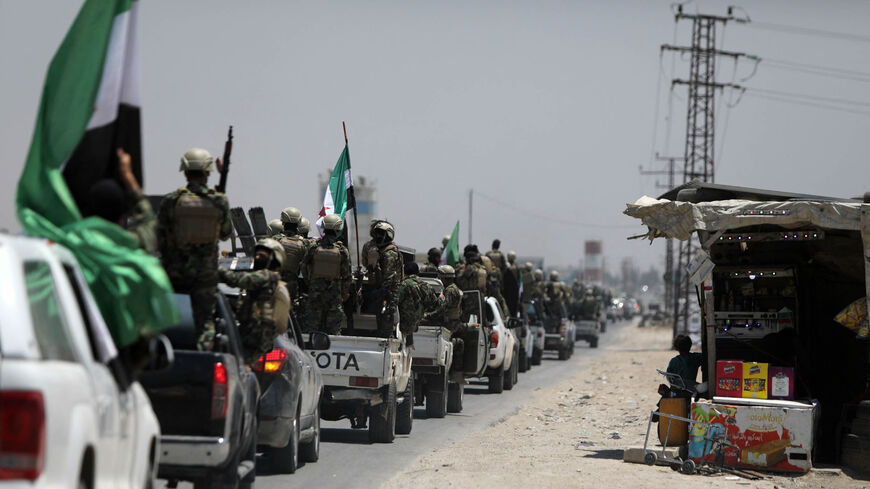 Turkish-backed Syrian rebel fighters are pictured in the border town of Azaz in the rebel-held northern part of the Aleppo province, as they head toward an area facing the Kurdish-controlled town of Tal Rifaat, Syria, June 9, 2022. - Bakr Alkasem/AFP via Getty Images

ALEPPO, Syria — The Turkish-backed Free Syrian Army (FSA) factions in northern Syria have seriously started considering how to manage Tal Rifaat and Manbij in the countryside of Aleppo, which they plan to take over after expelling the Kurdish forces as part of an imminent Turkish military operation in the area.

Two military councils have so far been established in Tal Rifaat and Manbij for this purpose.

The FSA is working to mobilize fighters from Tal Rifaat and Manbij under the umbrella of the newly formed military councils whose mission is to participate in the upcoming military operation. These councils will also be responsible for protecting and managing the two areas after controlling them.

The opposition-affiliated Council of Trustees of the Revolution in Manbij issued a statement June 5, saying, “The people of Manbij have met with the military factions and agreed to restructure the city’s military office to lead the operations of liberating Manbij, and appointed Lt. Col. Adnan Haj Mohammed as head of the [newly formed] office.”

Speaking to Al-Monitor, Mohammed said, “The military office referred to in the statement is the recently established council. It includes hundreds of FSA fighters from Manbij. They gathered under the council’s umbrella to coordinate military efforts to liberate the area from the Syrian Democratic Forces [SDF].”

He added, “The council’s main objective is to protect the area after its liberation from the SDF, to protect people, their properties and homes, and to prevent abuses and violations against civilians that could be committed by parties hostile to the FSA and those who do not want stability in the area, such as the Syrian regime, the SDF and the Islamic State. The FSA fighters who hail from Manbij are more familiar with the customs and traditions of its residents, so they will have an active role in the post-liberation phase.”

Hisham Skaif, an official in the public relations office of the FSA-affiliated Third Legion, told Al-Monitor, “The FSA leadership thought that it would be better to have two military councils for Tal Rifaat and Manbij and to include fighters from these two areas. These fighters are familiar with the areas and the residents; they can easily control the security situation after the expulsion of the SDF, and their presence will reassure the locals and facilitate the return of normal life.”

The FSA fears a repetition of the Afrin scenario, which the Turkish-backed factions took control of during the Turkish Operation Olive Branch in 2018. The people in the city have been subjected to robberies and violations at the hands of some unruly FSA groups.

By establishing these councils in Tal Rifaat and Manbij, it seems that the FSA wants to avoid such chaos there, by entrusting the people of the areas with controlling security and managing the two areas after the FSA takes over following the expected Turkish military operation.

Malik Abrash, owner of a perfume shop in Manbij, told Al-Monitor, “Manbij is a vibrant area with a high population density and a great deal of commercial activity. The people here fear that their businesses would be disrupted and that the FSA’s entry into Manbij would affect their commercial activity. They fear their property would be stolen and attacks would occur against them.”

He said, “I think that the military council that was established and includes FSA fighters from Manbij is an important step that may help the people of the area overcome their fear of displacement and encourage them to stay. Having FSA fighters from the area itself will make residents more comfortable, limit violations and contribute to the return of normal life after the SDF is expelled from Manbij.”

Younis Abdo, head of the newly formed military council of Tal Rifaat, told Al-Monitor, “The main objective of establishing the council is to unify the decision-making process and coordinate military efforts among the FSA fighters from the area. It also aims to control security in the area after its liberation, prevent the destruction of infrastructure and public utilities, in addition to protecting people's property in Tal Rifaat.”

He said, “The council includes FSA fighters from Tal Rifaat, and its role after the area is liberated from the SDF will be limited to ensuring protection, providing security and preventing violations; it will not interfere in the civil administration of the area.”

Abdo noted, “We held several meetings with civil figures and activists from Tal Rifaat, and plans were drawn up to coordinate efforts to provide basic and necessary services after the area is liberated, to ensure the quick and safe return of over 100,000 displaced people to Tal Rifaat and the small villages in its immediate vicinity.”

He added, “The participation of the Tal Rifaat Military Council in the upcoming battle will be organized; the forces affiliated with the council will be divided into three sections.”

Abdo explained, “The first section of fighters will be part of the military operations that the FSA factions will wage against the SDF. The second section includes the council’s special forces and will be part of the offensive forces, in coordination with the FSA’s Operations Command. The third section will be made up of groups of auxiliary forces, which provide support, secure supply routes and protect the liberated areas. This section also includes medical groups and groups specialized in removing mines and barriers that the SDF would set up in the attack axes.”

The FSA factions are in a hurry to prepare for the management and protection of these areas, which are supposed to be included in the expected Turkish military operation. They are conducting almost daily military parades in the countryside of Aleppo to showcase their readiness for the battle against the Kurdish forces, which may not start at all if Turkey does not obtain the green light from the United States and Russia.