The Syrian National Army affiliated with the Turkish-backed Free Syrian Army in Aleppo is merging a number of its factions under one group in order to reorganize ranks. 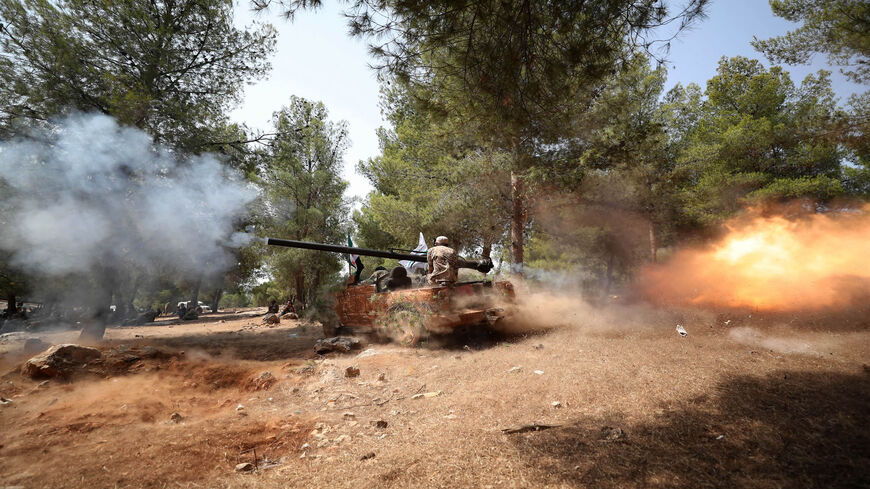 A special forces mission personnel affiliated with the Turkish-backed National Front for Liberation shows his skills during a graduation ceremony, al-Ghazawiya, near Afrin in the rebel-held northern countryside of Aleppo province, Syria, July 28, 2020. - Omar Haj Kadour/AFP via Getty Images

ALEPPO, Syria — The areas controlled by the Turkish-backed Free Syrian Army (FSA) in the countryside of Aleppo in northwest Syria have recently witnessed the merger of a number of factions under new names.

Most recently, on May 30, three military factions of the Syrian National Army (SNA) affiliated with the FSA in the countryside of Aleppo announced their merger under the name of the First Division. The factions that merged are the Ninth Division’s Brigade 143, Brigade 111 (Northern Brigade) and Brigade 112.

In this context, Capt. Abo Jalal, commander of the newly formed First Division, told Al-Monitor, “This merger affirms our commitment to strengthen and support the SNA institution to achieve more progress. It reflects our insistence on defeating crime and protecting and preserving the dignity of the Syrian people who believe in the revolution and the struggle for liberation and change.”

Col. Ahmed Hamadeh, military analyst and defected Syrian officer, praised the integration of the SNA factions. He told Al-Monitor, “This will positively reflect on the performance of armed factions in the battlefield. The reduced number of factions and the merger of small factions under a unified command will definitely lead to a better military organization and discipline. The SNA has three legions, and each legion includes a number of factions. The less factions there are, the more centralized the decision-making process will be.”

He added, “The mergers take place in coordination between the leaders of the factions and the Ministry of Defense of the opposition’s [self-styled] interim government. When the merger agreement is reached, the minister of defense issues the relevant executive order. Each faction has to implement the administrative and military procedures related to this merger.”

A military official in the Ministry of Defense of the Syrian opposition’s interim government told Al-Monitor on condition of anonymity, “The merger between the factions is an administrative and organizational restructuring process within the SNA. We first discussed this step at the beginning of this year through consultations between faction leaders and officials in the Ministry of Defense.”

He noted, “We are trying to take advantage of this period of calm to rearrange the internal ranks and prepare for any upcoming confrontation or battle with more efficient performance and organization than before."

He pointed out that the interim government’s Ministry of Defense will continue its efforts in this context and integrate more factions to facilitate their leadership, organization and control of their members and prevent any violations.

Col. Mustafa Bakkour, a Syrian army defector residing in Idlib, told Al-Monitor, “The SNA makes changes from time to time within its administrative structure for several reasons. These most notably include the formation of large military groups under one leadership and with one goal. These steps aim to avoid the multiplicity of authorities, conflicting decisions and competition among leaders. [The recent mergers] are a good call.”

He said, “Since its establishment, the SNA factions have been working under the supervision of the Turkish army. I believe all organizational matters and decisions taken by the factions regarding mergers and other organization steps are with the direct support and blessing of the Turkish army, which aims to develop this military opposition institution.”

The SNA controls the countryside of Aleppo, in addition to the areas of Ras al-Ain in the northwest of Hasakah province, and Tell Abyad, north of Raqqa province. On Dec. 30, 2017, the formation of the SNA was established by a military group in the Syrian opposition.

On Oct. 4, 2019, the head of the opposition’s interim government, Abdul Rahman Mustafa, declared the merger of the SNA and the National Liberation Front (NLF) into one army, under the umbrella of the Ministry of Defense in the interim government. Speaking to the press in Sanliurfa, Turkey, Mustafa said back then that this army seeks to free Syria from corruption, sectarianism and dictatorship, and to defend Idlib, Hama and the countryside of Latakia. He added that the unified SNA will strive to “return Syrian land to Syrians.”

As of 2019, the SNA included all the factions that were affiliated with it and formed in December 2017, in addition to 11 factions of the FSA-affiliated NLF that was established in Idlib in May 2018. The merger between the SNA and the NLF brought the number of overall fighters to 80,000, according to the interim government.