Turkey strives to unite rebel factions in Syria against Assad

Turkey is sponsoring talks between two groups affiliated with the Free Syrian Army (FSA) to unite their forces ahead of a looming offensive at Idlib by the Syrian regime. 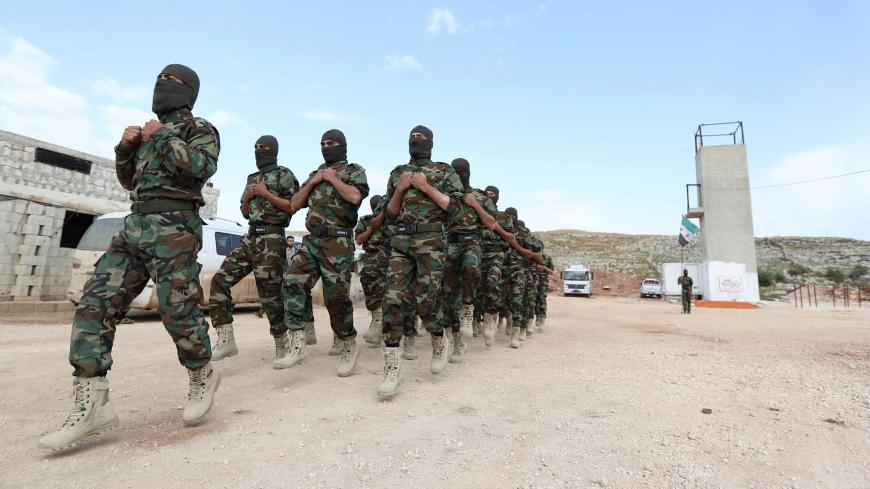 ALEPPO, Syria — Even as Ankara warns that a military confrontation in northern Syria would be a disaster, Turkey is preparing for just that scenario by working to unite rebel forces at Idlib against the regime of Syrian President Bashar al-Assad, who has Russia's support.

Turkey is encouraging leaders of the National Liberation Front (NLF) and the Syrian National Army (SNA) to join forces. Both groups are affiliated with the Free Syrian Army (FSA). Turkey offers support to the SNA — which was formed Dec. 30, 2017, and is also affiliated with the opposition’s Syrian Interim Government in the Euphrates Shield area, east of the river. Turkey also supports the NLF in Idlib. Thus, it would serve Ankara for both groups to unite under a single military command, as Turkey doesn't want to give up the area it occupies in northern Syria.

After 11 years of civil war, the regime has cleared rebel groups from most of Syria, and those left are concentrated in Idlib. There are also terrorist forces there, and many civilians. The people there are living in fear, as the Syrian regime is threatening to invade Idlib, disregarding all Russian-Turkish de-escalation understandings reached during numerous peace negotiations. Turkey hopes unifying the factions will ward off possible attacks by the regime.

On Aug. 12, the SNA commander, Col. Haitham al-Afisi, expressed the readiness of the army stationed in the Euphrates Shield area to merge with the FSA factions in Idlib. Those factions joined the NLF as it was being launched in May.

When it was first formed, the NLF included 11 FSA factions from opposition-controlled areas, namely Idlib and the northern countrysides of Hama and Latakia provinces. On Aug. 1, four other FSA factions from Idlib and northern Syria joined the NLF, including the Syrian Liberation Front (SLF) and Jaish al-Ahrar.

The SNA deputy commander, Col. Ahmed Al-Othman, told Al-Monitor, “SNA and NLF leaders have been meeting in Idlib and the countryside of Aleppo to reach an understanding on the unification of the two military blocs under one command.” He added, “We are making great efforts to achieve this crucial unity at this critical stage in the Syrian revolution. If we succeed, the Syrian opposition would have an undeniably strong military force in the Syrian north, with over 100,000 fighters.”

Othman said, “After the FSA took control of the area of Afrin, northwest of Aleppo, the coast became clear between the Euphrates Shield area in Aleppo’s countryside and Idlib; the areas are now geographically linked and the FSA factions can easily unite.”

NLF spokesman Capt. Naji Mustafa also told Al-Monitor his group is ready to unite with the others, though he added, "The developments around Idlib and the invasion threats the regime is making are forcing us to shift our attention toward fighting off possible attacks, instead of focusing on our unity.”

Meanwhile, NLF leader Capt. Abdel Salam Abdel Razzaq told Al-Monitor, “I believe this step will be a success because it is based on sound foundations and takes into account the military standards in force in these armies. For the first time ever, the FSA will [become] an organized entity that relies on professional officers and academics who defected from the regime’s army years ago.”

He continued, “The people here in the north wish that all FSA factions would unite under one military entity and have unitary decision-making, after all these years in which the opposition suffered from division and chaos. If we succeed in uniting the SNA and the NLF, our army would be the strongest and the scales would tip in our favor.”

Abdel Razzaq said, “Turkey wants all FSA factions to unite. It would bode well for the Turkish side and would strengthen its position against other regional powers that are interested in the Syrian issue, such as Russia and Iran.”

One can’t help but wonder whether such a unification could indeed help the Syrian opposition in the north in its fight against the Syrian regime. It all seems to depend on Turkey's role in supporting all the factions and accelerating the process of uniting under one entity.