It's not clear what plans Ankara has for the National Liberation Front, a collection of Syrian opposition groups Turkey has established at Idlib. 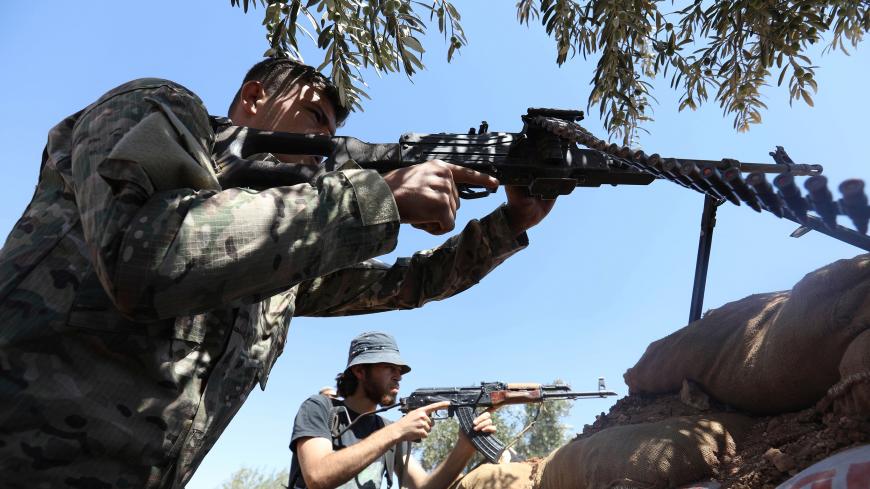 Bargaining between Russia and Turkey on a potential military operation at Idlib, Syria keeps getting bogged down in endless debate over distinguishing “moderates" from "terrorists.”

Turkish Foreign Minister Mevlut Cavusoglu hosted his Russian counterpart Sergey Lavrov in Ankara Aug. 13-14. He responded to the Russian persistence for an operation with “We have to identify the terrorists and eliminate them. It will be a catastrophe to bomb schools and hospitals because there may be terrorists there. We must distinguish between the moderate opposition and terrorists.”

As the Syrian army moves north toward Idlib after clearing opposition forces from Daraa and Quneitra, all eyes are now on Turkey, which has encircled Idlib with 12 observation posts. Idlib is the last stronghold of the Syrian rebels.

Based on leaks to the media and information learned on the ground, a comprehensive strategy is emerging: Turkey wants to give the appearance of having deterrent power with its own military assets and to set up a joint front with organizations that control parts of Idlib. Meanwhile, Turkey is reinforcing its observation posts with concrete walls and air defense weapons. Though concrete barriers are designed to deter threats from groups that frequently clash with each other, the air defenses can only be for use against Russia and Syria.

Turkey obviously has no plans to leave the areas it controls and is busy trying to consolidate the clashing groups under one roof. Ankara’s goal is to free these groups from the terrorist label and prove that they have become reasonable interlocutors.

Asharq Al-Awsat newspaper reported in July that Turkey had submitted a proposed Syria road map to Russia. According to that plan, Turkey would organize a conference to bring together all opposition groups. These groups would join the National Liberation Front (NLF) — a coalition in Syria formed in May under Turkey's auspices — and hand over their heavy weapons to the Turkish army. As Russia would like to keep Turkey involved in the Astana peace process for Syria, Moscow might support this option.

A late-July meeting in Sochi, Russia produced another proposed formula. Russia reportedly asked Ankara to come up with a solution for Idlib before a Sept. 7 summit among Turkey, Russia, France and Germany. Turkey moved to bring all armed groups under one command in a national front.

Turkey asked Hayat Tahrir al Sham (HTS), which is considered by many a terrorist group, to join the NLF, but it did not. However, Ahrar al-Sham and Nour al-Din al-Zenki — two extreme Sunni groups that had left HTS — had formed the Syria Liberation Front (SLF) in February. The SLF subsequently, along with several other groups, including some affiliated with the Muslim Brotherhood, joined the NLF in August.

About a dozen groups that had tried to remain neutral agreed to join on May 28.

Is this impressive-sounding body truly unified, or is it just an image? What is it seeking?

For one thing, this structure, which is essentially a survival ploy by the factions to foil attempts to eliminate them, doesn’t offer a path to a solution. NLF members won't necessarily do everything Turkey wants, and they won't take their cues from the Astana process. Most of them do feel they owe something to Turkey and can be pragmatic in their relations with Ankara, but they are basically outfits that have their own foreign connections and financial resources, dedicated to their own ideologies. Those who are more submissive to Turkey are those that participated in the Syrian National Army (SNA), a division of the Free Syrian Army that participated in Turkey’s Euphrates Shield and Olive Branch operations in Syria.

Turkey ensures their loyalty by paying their salaries and providing ammunition and logistical support. While equipping and training these groups in the Euphrates Shield area of operations, the intention was to put all the groups in Idlib under Turkey’s control. But they saw Turkey’s targeting of Kurds seeking autonomy and the Astana process as deviating from the goals of the revolution, and they saw the SNA's spread over to Afrin, Jarablus, Azaz and al-Bab under the protection of the Turkish army. It didn’t take long to understand that having the SNA and Turkish army in Idlib would provoke clashes with these groups, so the idea was abandoned, leaving the ground primarily to the NLF.

In short, these groups, although pretending to heed Turkey, still do what they want. NLF spokesman Capt. Naji Abu Hudeifa described the groups' goals as stopping the regime's expansion and defending the ground they control. They are now busy setting up joint operations rooms to prepare for the war.

What will happen with the many groups that didn't join NLF? These groups include radical outfits that find the HTS unacceptable because it's prone to make deals. HTS refused to terminate its operations and join the NLF, although some believe HTS may concede at the end. But even if it does, there is still significant jihadi-Salafi potential among groups that in the past operated with Jabhat al-Nusra and the Islamic State and today follow the global jihad line of al-Qaeda. These groups saw HTS cooperate with the secular Turkish state to set up army observation posts at Idlib, which deviates from jihadi principles. They reacted in February by setting up a coalition called Hurras al-Din that includes a dozen or so factions that could expand their presence even more by recruiting remnants of IS, which has lost its field domination.

These outfits include scores of foreigners in their command ranks and fighting cadres. Foreign jihadis that have opened branches in Syria have also settled in Idlib. There are Caucasian, Uzbek and Kyrgyz fighters. The Turkistan Islamic Party of Uighurs, which China is chasing in East Turkistan, is another capable group. Uighurs also control the city of Jisr al Shughour in Idlib province.

In such an ungovernable region of jihadi-Salafi rivalry, even among supposed allies, where there are constant breakups and new alliances and where scores are routinely settled by assassinations and bombings, Turkey is talking of distinguishing moderates from terrorists — but without explaining what it wants to achieve. Is Turkey concocting a bargaining chip it can put forth at talks in Astana or Geneva, or is it forming a front ready to fight? Is Ankara trying to find a way to eliminate those who haven't agreed to toe the Turkish line? If so, who will carry out that nasty, probably bloody, task — Russia, the Syrian army or rival groups? Firas Tlass, the son of former Defense Minister Mustafa Tlass who has joined the opposition, claims Turkey is planning to shift organizations like HTS and Jund al Aqsa to areas controlled by the Kurds, though Russia has rejected the idea.

Or are all these moves just ploys to gain time and promote the restructuring of Syria? The Turkey-Iran-Russia summit in Tehran at the end of the month and the Istanbul summit in September are likely to shape the Idlib strategy.

You don’t need to be a prophet to predict that this fall will be a very hot one.