A Syrian rebel faction opened a business road crossing in the Aleppo countryside to collect funds for the local civilians and military. 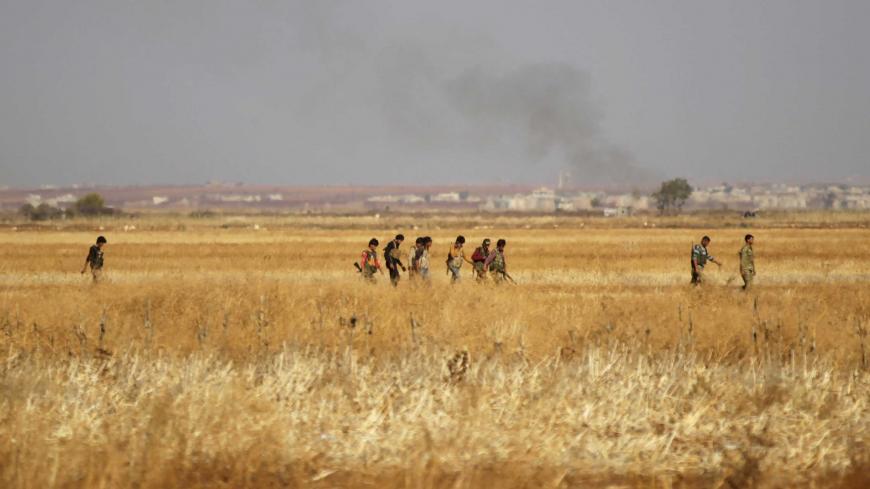 ALEPPO, Syria — On Dec. 1, the military council of the town of Marea — located in an Euphrates Shield area in the northern Aleppo countryside — opened the Towayhina business crossing, near Towayhina village. The crossing links areas held by the Free Syrian Army (FSA) with areas under the control of the Syrian Democratic Forces southeast of the city.

Merchants in Euphrates Shield areas were satisfied with the decision to inaugurate the Towayhina crossing, given its central location, proximity to the regime-held areas in Aleppo and trade convoys’ easy access to Aleppo's western countryside areas and Idlib— both of which are under the opposition’s control. Also, the tariffs imposed on goods are lower than those imposed at other crossings in the Euphrates Shield areas, such as Em Jlud crossing, south of Ghandoura town, and Al-Shat crossing, west of Azaz city.

The Marea military council — which supervises the management of the crossing — is composed of several Free Syrian Army (FSA) factions, namely Al-Jabha al-Shamiya, Al-Mutasim Brigade, the Mustapha Regiment, and Al-Safwa Islamic Battalion. Marea’s city council also takes part in crossing’s management, and both councils agreed that financial revenues obtained from tariffs imposed on goods at the Towayhina crossing be divided between them. The local council plans to use its share of the funds to implement service projects in the city, while FSA factions will spend their share to pay the salaries of more than 100 militants affiliated with Marea’s military council and who are in charge of securing and managing the traffic at the crossing.

Al-Monitor made a visit to the Towayhina crossing and met with Faisal Abdul Rahman, a member of the crossing supervisory authority — which is affiliated with both councils and includes representatives of the military council’s factions. He said, “Although it has been only a few days since the inauguration of the crossing, separating the Euphrates Shield areas in the Aleppo countryside from SDF-held areas, southeast of Marea, a good number of trade convoys are using the crossing in both directions. Fuel derivatives, diesel, gasoline and crude oil are brought from SDF areas to Euphrates Shield areas, while food, clothing, cement, iron and industrial machinery enter SDF areas from Euphrates Shield areas, mostly originally brought from Turkey through the Bab al-Salameh crossing.”

He anticipated that the flow of trade will increase in the future, given the facilities provided at the crossing. He said, “Modest tariffs are imposed on goods and commodities passing through the crossing, and fees imposed on trucks carrying food are not that high. [For instance], a fee of around $100 is imposed on a vehicle driving towards the SDF areas and carrying 20 tons, while $200 is imposed on trucks coming from the SDF areas and carrying not more than 20 tons in fuel products. Such amounts, equal to half the sum imposed by other crossings in ​​the Euphrates Shield area, are suitable for traders.”

Al-Monitor also spoke to Mahmoud Shami near the crossing. Shami, who has a truck full of food items, “namely ghee, sunflower oil, olive oil, sugar and biscuits,” was waiting for his turn to enter through the crossing. He said, “I am heading to Raqqa, carrying a heavy load of food products. It is going to be a short and easy trip. Now, I do not have to enter the city of Afrin, and unload the truck to have the goods inspected as happens every time at Al-Shat crossing, west of Azaz city. Things are different at the Towayhina crossing. I don't have to pass through the large cities and nearby checkpoints; I will be avoiding the long lines caused by the inspections and security measures.”

The inauguration of additional business crossings in ​​the Euphrates Shield areas could promote further competition among FSA factions that seek to obtain financial gains from these crossings to promote their influence in these areas and pay their fighters their salaries. Nevertheless, the Towayhina crossing administration told Al-Monitor that this crossing is different, as the largest share of revenues will be used to provide services to citizens in Marea city and nearby small villages, under the local council’s supervision. Addtionally, FSA factions will only receive a small share to pay the factions for the security measures and for regulating the work at the crossing.

Abdel Fattah Nasser, a member of the local council’s media office, told Al-Monitor that the crossing’s daily revenues do not exceed $5,000. He said, “The daily financial revenues will hopefully grow bigger in the future to reach $20,000. Marea’s local council intends to implement a series of projects designed to provide services, such as paving roads within the city, repairing sewer networks, expanding potable water supply network, and renovating schools and bakeries.”

Will Marea’s military council fulfill the promise of having the largest share of the Towayhina crossing’s financial revenues used in the provision of public services to citizens? Will the new crossing continue to skip out on rivalries among the factions? Knowingly, the crossings were one of the reasons behind earlier fighting between FSA factions in the Euphrates Shield area.

The Euphrates Shield areas' citizens do not believe that the FSA factions are serious about usıng revenues for the provision of services. They argue that Marea military council seeks to grant the crossing more legitimacy via such promises. Many citizens also perceive that the FSA seeks to inaugurate additional business crossings to obtain more funds and avoid any collapse in case the Military Operation Room suspended its financial support.