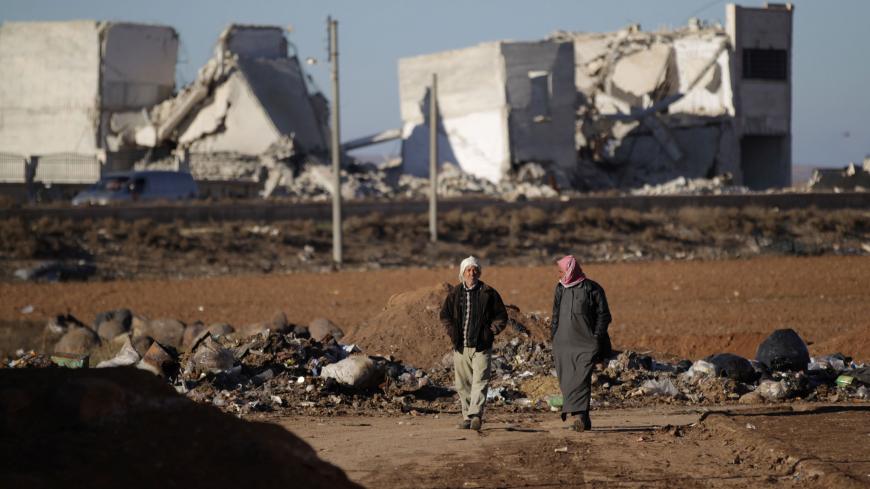 ALEPPO, Syria — The local council in Azaz, in Aleppo’s northern countryside, announced Jan. 29 the opening of the Department of Real Estate Interests tasked with processing all real estate paperwork in Azaz and its surrounding areas. The department started processing public requests Feb. 5.

The local council advised citizens who need real estate services to contact the new department or the competent court, according to the due process of law. Citizens who want to file a complaint or had their property taken over can refer to the court of ownership conflict resolution affiliated with the Azaz court. Once a case is settled in court, citizens would then head to the Department of Real Estate Interests to finalize the paperwork.

The court in Azaz refers to the Palace of Justice that was established in September 2018 in the city of al-Rai, in the northern Aleppo countryside. The Palace of Justice, which adopts Syrian law after amendments, is the main reference for all courts in the Euphrates Shield area.

Syrians in the areas under the Turkish-backed Free Syrian Army (FSA) control in northern Aleppo countryside have been without a local council real estate department since 2012, after the FSA seized from the regime Azaz and most towns in northern Aleppo. Since then, citizens have not been able to register, sell, buy or transfer ownership of property. In addition, many lost their documents proving ownership of properties due to the war and the ongoing displacement.

Mohammed Omar, member of the Azaz local council, told Al-Monitor, “Around 300,000 people currently live in Azaz, half of whom are displaced from various Syrian cities. This is an estimated number as there are no official statistics, but we can say that the Azaz population has nearly tripled since 2012.”

The establishment of the Department of Real Estate Interests comes as part of the steps local councils in the Euphrates Shield area are taking to offer services to citizens, with the support of Turkey.

Turkish-backed local councils operating in the Euphrates Shield area in Aleppo countryside, including the council of Azaz and its surrounding areas, have been trying to organize the civil situation of citizens and guarantee them their rights to their properties, register new sale and purchase contracts, and transfer ownership and inheritance, in addition to other real estate paperwork.

Many locals and others who were displaced have established residential and commercial facilities and shops in the area. In light of the increased number of facilities, it seemed necessary to establish a real estate department in Azaz, the northern Aleppo countryside, the Euphrates Shield area and Afrin, which are under FSA control. (There are no statistics on economic growth in the area.)

The real estate department in Azaz is the first of its kind in the Euphrates Shield area, and other local councils in Aleppo countryside should follow suit in towns such as al-Bab, Jarablus, Marea and al-Rai.

Mohammad Omar Mustafa, member of the Azaz local council, told Al-Monitor, “Establishing the real estate department will contribute to the growth of different facilities in the city and its countryside and will boost the trust of local investors, because they will now obtain real estate registers and proof of ownership. The papers will be certified and recognized by the local council, and the presence of such a department will help register property and put an end to the fraudulent operations of the past few years.”

Some have taken over properties that were left vacant when their owners went to Turkey or elsewhere due to the conflict, falsifying the ownership documents in order to sell the property.

Al-Monitor visited the Department of Real Estate Interests in Azaz, whose building includes a large hall and five rooms for conducting transactions and facilitating the affairs of citizens. The department employs 12 staff, in addition to its Director Mohammad Taljebini.

The building used by the department is the same building that the regime-affiliated Real Estate Department occupied before 2012, when the northern Aleppo countryside was under its control. The building remained for a long time under FSA control, but the local council in Azaz seized the building in early 2019 and renovated it with the support of Turkey. The building is furnished with Turkish-made office furniture.

Taljebini told Al-Monitor, “We started welcoming citizens on Feb. 5, a few days after the opening was announced. We had some arrangements to finish, but we are now ready to welcome citizens’ requests and conduct real estate transactions as per the legal process. This includes registering new sale and purchase contracts for properties and facilities.”

Taljebini noted that old real estate records dating back prior to 2012 when the previous department was still in place under the regime rule are still intact. The FSA preserved them in a safe place to protect citizens’ documents and rights from loss. He noted that the Turkish government helped the department staff to photocopy and archive all real estate records, and restore and equip the building. The Turkish government will pay the department's employees, just like the staff of the local council of Azaz.

Any Syrian citizen from outside Aleppo can own property in Azaz and its countryside and can register the property with the Department of Real Estate Interests, on condition that their identity is verified and they receive security approval from the police, general security in Azaz and the FSA.

The department collects a fee for the real estate transactions between a buyer and seller, and for registering property and transferring its ownership. The fees vary depending on whether the property to be registered is a piece of agricultural land, residential land, apartment or shop. Taljebini did not disclose the fees and only said that they were symbolic.

Hisham Mohammad, who is displaced from eastern Ghouta and lives in Azaz, told Al-Monitor, “In the past months I was afraid of buying a house in the city because there was no possibility to transfer ownership and register the land legally. After the department opened, I feel I can take this step and buy a house. Many people were waiting for this legal measure.”