Turkey is helping set up a commercial hub in northern Syria to boost economic development in areas liberated from the Islamic State. 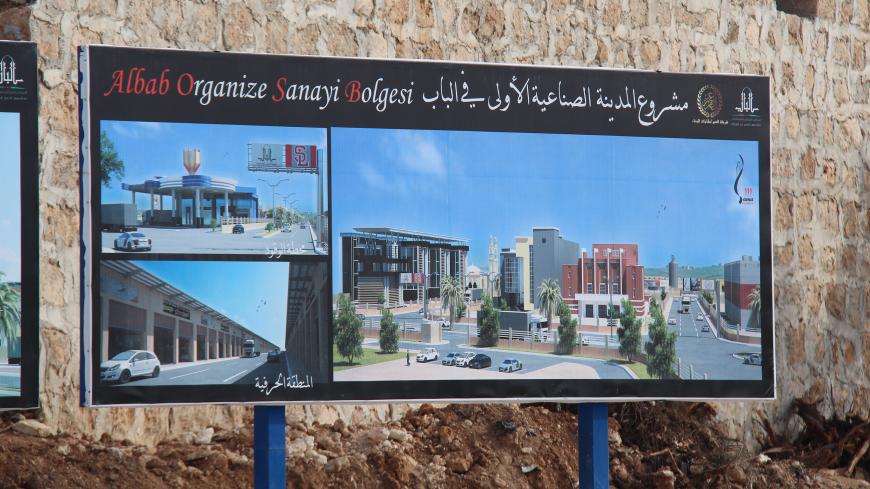 ALEPPO, Syria — Construction has begun under Turkey's auspices in northern Syria of First Industrial City, an economic development project in the Aleppo countryside, in an area swept by the Turkish-led Operation Euphrates Shield. Ground was broken and a cornerstone laid Feb. 10 a few miles northwest of the city of al-Bab. Those on hand for the ceremony included Shonoul Asmar and Genghis Ayhan, assistants to Ali Yerlikaya, the Gaziantep governor whose administration will help supervise the project, as well as the head of al-Bab's local council, Jamal Osman, and a number of other dignitaries and public figures from the area.

Following al-Bab's liberation by Free Syrian Army and Turkish forces from the Islamic State on Feb. 23, 2017, the city has emerged as a commercial hub. First Industrial City is expected to boost the local economy and provide job opportunities for thousands of young people. It could potentially also help achieve stability in the rebuilding area, to Turkey's relief. The cost of the project has not been publicly announced.

Mahmood al-Najjar, director of the media office for al-Bab’s local council, told Al-Monitor, “The industrial city will be the largest industrial complex in the Euphrates Shield area and will extend over 56 hectares [138 acres]. It will include a variety of services including a water network, a sewage treatment unit, traffic police, hotels, gas stations, a power station and a road network connecting the industrial city to most of the cities and villages of the Euphrates Shield area.”

The project, located on a plateau with an abundance of olive trees. Its planning, design and construction are all being handled by architects from local firms.

Najjar said that the architectural plans for the industrial city are in line with international standards and specifications. In the first stage, the public will be able to buy shares from around 400 industrial facilities to be assigned sites. They will include engineering, manufacturing, food and textiles, among other enterprises.

According to Najjar, the Turkish government will open a highway between the cities of al-Bab and al-Rai, near the Syrian-Turkish border. The road will play a major role in sustaining the industrial city, which will be connected to the al-Rai commercial crossing. Raw materials will flow in through the crossing and manufactured materials will flow out as exports to the Turkish market.

Al-Monitor toured the future site of the industrial city and found work already underway on roads and sewage treatment facilities.

Jumaa Mansour, an architect supervising operations, told Al-Monitor, “The [infrastructure] project will be implemented over the course of six months, and local construction companies employing Syrians from the Euphrates Shield area will be in charge of the construction process. The city will stretch over an area of ​​56 hectares, 16 hectares [40 acres] of which will be allocated for the construction of roads, services and facilities.”

Mansour said the industrial city is expected to attract Turkish investors, and several Turkish industrialists have already inquired about properties, enticed by an opportunity to invest in an area under Turkish influence and with abundant cheap labor. No taxes have yet been imposed on investors willing to set up factories.

Majed Saleh, another supervising architect, told Al-Monitor, “The project is sponsored by Turkey and carried out in cooperation with al-Bab's local council and a large group of industrialists and traders from al-Bab and the wider Euphrates Shield area. More than 30% of the overall industrial properties have been sold since the announcement of the project on Feb. 10. … Each square meter [11 square feet] is priced at $10, and each property can spread over up to 1,100 square meters. In other words, an industrial property is priced at a maximum of $11,000, and owners can easily establish factories there given that the industrial city will provide water, electricity and sanitation services.”

Ali Rajab, an architect and director of the service bureau for al-Bab's local council, told Al-Monitor that the project will provide more than 6,000 jobs, boost the local economy and help rebuild al-Bab and the nearby Aleppo countryside. Rajab explained that the project is supervised locally by al-Bab's local council, and service bureau issues licenses for industrial projects.

The project founders — local traders and industrialists supported by the Turkish government — believe that the industrial city will become a magnet for local investors.