Turkey's State Electricity Generating Company has been awarded the contract to supply al-Bab, in northern Syria, with electricity. 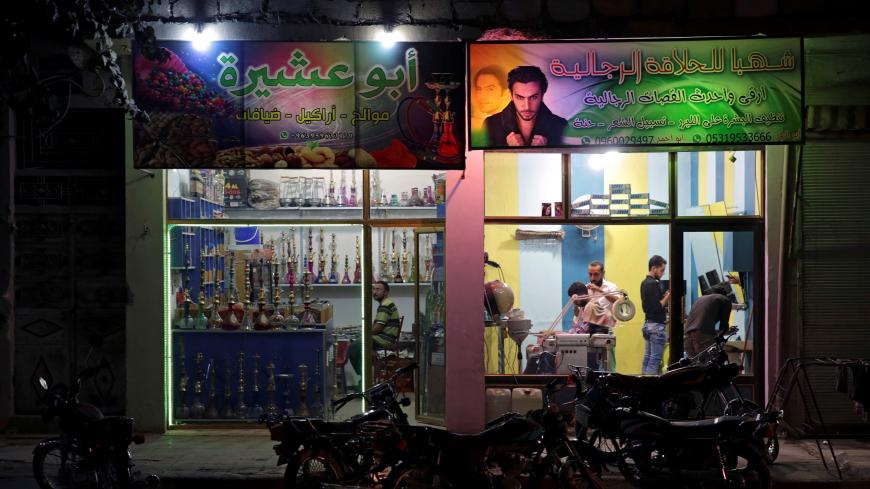 A barber works inside his shop on the southern outskirts of al-Bab, Syria, Sept. 15, 2017. - REUTERS/Khalil Ashawi

ALEPPO, Syria — Delegates from the Turkey's State Electricity Generating Company, on Aug. 19 visited the local council for the city of al-Bab, in the opposition-held northeastern Aleppo countryside. The delegates then toured the city to conduct a study to develop a plan to supply it with electricity in agreement with the local council.

The inspection tour was scheduled to continue throughout August, with the aim of assessing the status of the city’s existing electricity network infrastructure and determining the requirements for its restoration.

Al-Bab's council had on Aug. 1 received two offers from two Turkish electricity companies to supply the city with electricity. On Aug. 16, the council held a public consultation, dubbed “Power On Soon,” at which the city’s dignitaries, mayors and locals gathered to discuss the issue of electricity and officials explained the offers.

Ali Rajab, head of the council’s service office, told Al-Monitor, “The first offer was made by Aksa, a Turkish private company, at a cost of $4.5 million, for a period of five years, and a capacity from 20-500 megawatts. As per the project, there would be a first-time subscription fee amounting to $150 for those who wish to subscribe to the service and then a monthly tariff of $0.17 per kilowatt of electricity. The project implementation period would be of no more than four months.”

He continued, “The second offer was submitted by the State Electricity Generating Company, affiliated with the [Turkish] Ministry of Energy, without any cost, meaning that the ministry will cover the costs of the project and forgo a first-time subscription. The monthly tariff would be $0.08 per kilowatt and the implementation last eight months.”

Perhaps to no surprise, Rajab then stated, “During the public consultation, both projects were discussed, and it was agreed to accept the offer of the Ministry of Energy, which is excellent in terms of cost compared to the first one. This is not to mention that the Turkish government will support the project.”

Rajab said that the electricity supplied would come from Turkey, and al-Bab residents would pay the Turkish state electricity company for power at the same rate as customers in Turkey.

Rajab further explained, “The local council has agreed with the Turkish Ministry of Energy and a contract has been signed to this effect. The State Electricity Generating Company is currently conducting a field study and the project is slated [to begin] implementation by Sept. 1 and will be completed within eight months, but could drag out to a full year.”

This electricity project is one of the largest of its kind in the Euphrates Shield Area, the northern Syrian territories cleared of Islamic State fighters by invading Turkish forces in coordination with allied militias from the Free Syrian Army (FSA). Al-Bab is the biggest city in the area under FSA control, with more than 200,000 residents, in addition to a large number of displaced persons from other parts of Syria. Several towns and villages incorporated in al-Bab that rely on generators would also benefit from the new electricity supply, as would the refugee camps currently without electricity on the periphery of the city.

Fawzi al-Sayeh, a member of al-Bab’s local council, told Al-Monitor, “It is likely that the project implementation period will be longer than anticipated given the many obstacles. The electricity grid in the city is badly damaged due to the battles and bombings over the past years. The State Electricity Generating Company has to re-establish the grid and install new generators, which will take time and effort.”

The project is expected to have a positive impact on al-Bab’s various sectors, markets and industrial workshops, as the cost of production will decrease with the new energy supply. Local residents, as elsewhere in the FSA-held areas in the north, must pay high prices for electricity, which is provided by small private diesel generators that are inadequate for manufacturing and craft production, such as blacksmithing, carpentry, tailoring and other similar work, because of their low generating capacity and high cost.

Abdel Rahman Othman, who owns a cheese and dairy factory in al-Bab, told Al-Monitor, “The electricity project will save me a lot of effort and money. If the service is actually provided to the city, I will be able to run the refrigerators and cooling machine at lower cost. Now, I pay a lot of money on diesel to keep the generators running for the refrigerators.”

To the northwest, closer to the Turkish border, the local council of the city of Azaz, also in the Euphrates Shield area, has signed a contract with the Turkish firm Akenerji to build a power plant. Construction started March 24.

Ankara's effort to provide electricity to FSA-controlled areas, where Turkey has extensive interests and influence, is part of an ongoing campaign to develop road networks, local councils and other public services in areas not so far from the Turkish border.