Protests in the Turkish-backed Free Syrian Army areas in northern Syria broke out due to the deteriorating services offered by some local councils, including electricity provided by a Turkish power company. 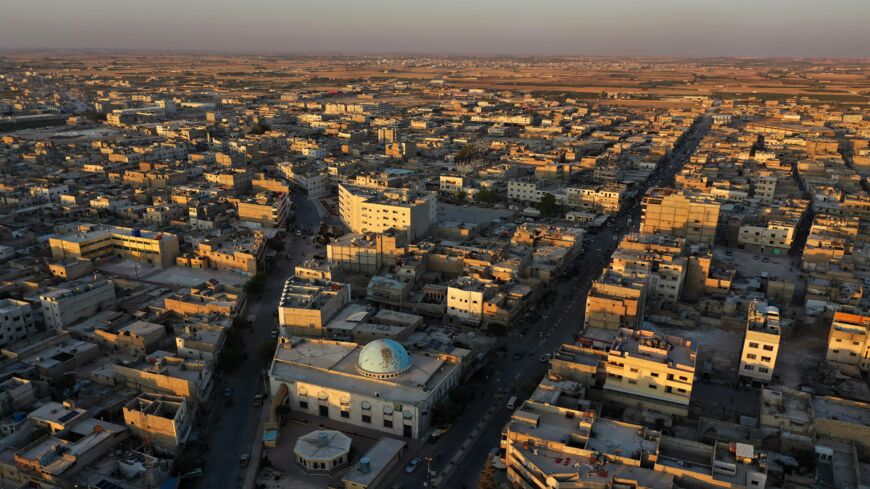 A picture shows an aerial view of the town of al-Bab in a rebel-held area in the north of Aleppo province on July 16, 2020. - AREF TAMMAWI/AFP via Getty Images

ALEPPO — Areas under control of the Turkish-backed Free Syrian Army (FSA) in the northwestern countryside of Aleppo are struggling amid deteriorating basic services, including electricity, thus pushing dozens of angry citizens to protest and demand local councils assume their responsibilities in providing services to al-Bab and Azaz.

Dozens of protesters took to the streets of Azaz Aug. 23, condemning the deteriorating services and tough living conditions amid the long and repeated power cuts across neighborhoods. Protesters chanted against the local council in Azaz and its countryside and called on the council to resign. They also carried banners demanding improved services and living conditions, and they called on the local council to sack the Turkish company AK Energy that operates in the city due to the repeated power cuts in Azaz.

Abdalgader Haj Othman, director of the Azaz media office, told Al-Monitor, “Protesters met with the management of AK Energy at its headquarters in Azaz and called on it to leave, halt its operations in the city and return people’s financial subscriptions, which they collected since the company began operating in the area two years ago.”

He added, “A delegation of prominent figures from Azaz, led by Rashid Zaamout, Radwan Ashawi and Khaled Hajoula, in addition to FSA leaders met with the head of the Azaz local council. They accused the council of ignoring the electricity problem and not imposing on the company agreements and provisions that guarantee a low price and high-quality service.”

Othman said “the delegation further called on the head of the local council to resign. Meanwhile, 10 prominent people from the city were chosen to meet with the governor of Kilis province in southern Turkey in order to dissolve the council and consider the demands to remove [AK Energy] and replace it with a more reliable company.”

AK Energy was the first Turkish company to invest in the energy sector in the FSA-controlled areas in the countryside of Aleppo. It signed its first contract in Azaz in 2018, and the company’s work extended over the following years toward the cities of al-Bab, Marea, al-Rai and other FSA-controlled areas in the Aleppo countryside. In general, the Turkish-backed local councils seem unable to actually control the company’s work and hold it accountable for its failure to perform. People are not happy with the local councils and are demanding they be changed because the councils are considered corrupt.

One of the participants in the recent protests in Azaz told Al-Monitor on condition of anonymity, “The local council in the city bears the largest part of the responsibility for the low-quality services, especially electricity, because it is not doing its job and is not pressuring the company to improve its performance. As protesters, we have called on the resignation of the council and the election of a new council that would be better able to shoulder its responsibilities.”

On Aug. 24, dozens of al-Bab residents in the northeastern countryside of Aleppo protested against the local council in the city, complaining about the poor basic services, mainly electricity.

Protesters gathered in front of AK Energy headquarters in al-Bab where they burned tires and blocked the roads leading to the protest site. The protesters called on the company to halt the repeated power outages that have resulted in huge losses, and they wrote on the walls of the headquarters words such as “thieves.”

On Aug. 24, al-Bab's local council issued a clarification statement that said: “To clarify the power outage in the city and in response to the demands of our people, we inform you that it was the result of five out of 29 transformers becoming out of service due to an emergency ground cable failure. The local council held a five-hour continuous meeting with the [Turkish] company. Consequently, a 100-meter ground cable was extended from the center of Houran to Qusour al-Sham, and work will start immediately. The city will be supplied with electricity again. We thank you for your understanding.”

The head of al-Bab's local council, Haitham al-Zein, told Al-Monitor, “The council took the protesters' demands seriously, and they will be met. All problems will be resolved as soon as possible.”

Ammar Khalif, one of the participants in the al-Bab protests, told Al-Monitor, “ We are protesting because of the recurrent, extended power cuts. The service provided by AK Energy is very bad and the voltage is low in most cases, which is burning household electrical appliances.”

Regarding promises made by the al-Bab council to meet the protesters' demands, Khalif said, “We have received many promises about improving the electrical service in the city, but we have not seen anything yet. And the situation has gone from bad to worse.”