Poor basic services in some parts of Aleppo countryside have ignited protests in which people are demanding that local councils resign. 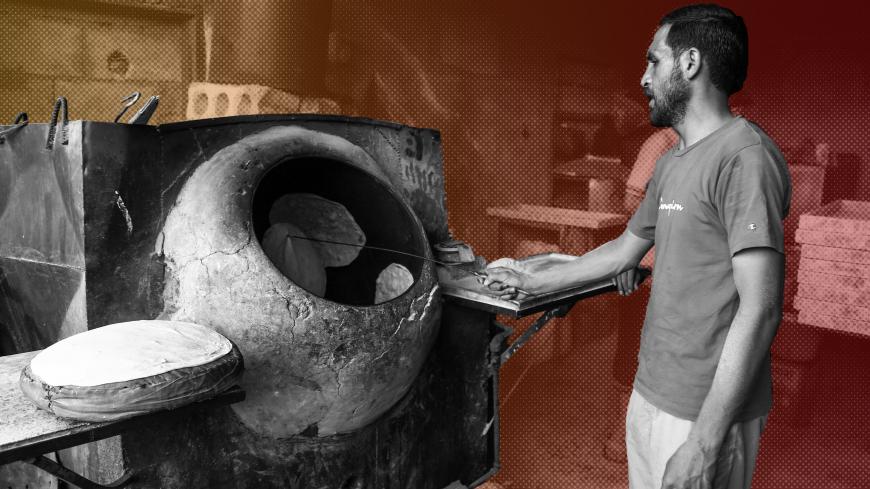 A Syrian man prepares bread in a kiln at a bakery in the northern city of al-Bab, Syria, May 24, 2018. - NAZEER AL-KHATIB/AFP/Getty Images

ALEPPO, Syria — Mass protests accusing local councils of corruption have been taking place in some cities and towns held by the Free Syrian Army (FSA) in the Aleppo countryside. Protesters took to the streets of al-Bab and Suran on April 5 and 12, blaming the councils of the two cities of negligence in the provision of basic services such as bread and water, and demanding that the council members resign and that new councils be elected.

After the local councils turned a deaf ear to the protesters’ calls, demonstrators warned that they will continue to protest until their demands are met.

The local councils are the highest civil authority in the cities and towns in the Aleppo countryside. All of the public service departments, such as bakeries and dispensaries, are affiliated with the local councils, which run the affairs of the departments and hire their employees.

Some of the local council's heads and members have been in the same posts for years. They were appointed to their posts when the situation was unstable in Aleppo countryside, protesters say. However, they say that the situation today is relatively stable and that it is time for radical changes to take place in the councils’ structure and for new councils to be formed in a democratic way.

Officials in Azaz's and al-Bab's councils told Al-Monitor that the councils in the FSA-held parts of the Aleppo countryside benefit from Turkey’s support. Their work is linked to Turkey’s Gaziantep, Kilis and Hatay provinces, and the salaries of their members, employees and heads are also paid by Turkey. Furthermore, a large part of the public service projects these councils provide, such as the rehabilitation of the sewage system and roads, is funded by the Turkish government, the officials said.

Al-Monitor was present at the April 12 mass protest in Suran, which started following Friday prayers. The protesters marched in the main streets of the city and raised the flag of the Syrian revolution and that of Turkey, as well as banners that read, “Down with the corrupt and failed local council,” calling on the council to resign. Hundreds of protesters rallied in front of the council’s building. “The people want to bring down the council,” they shouted. 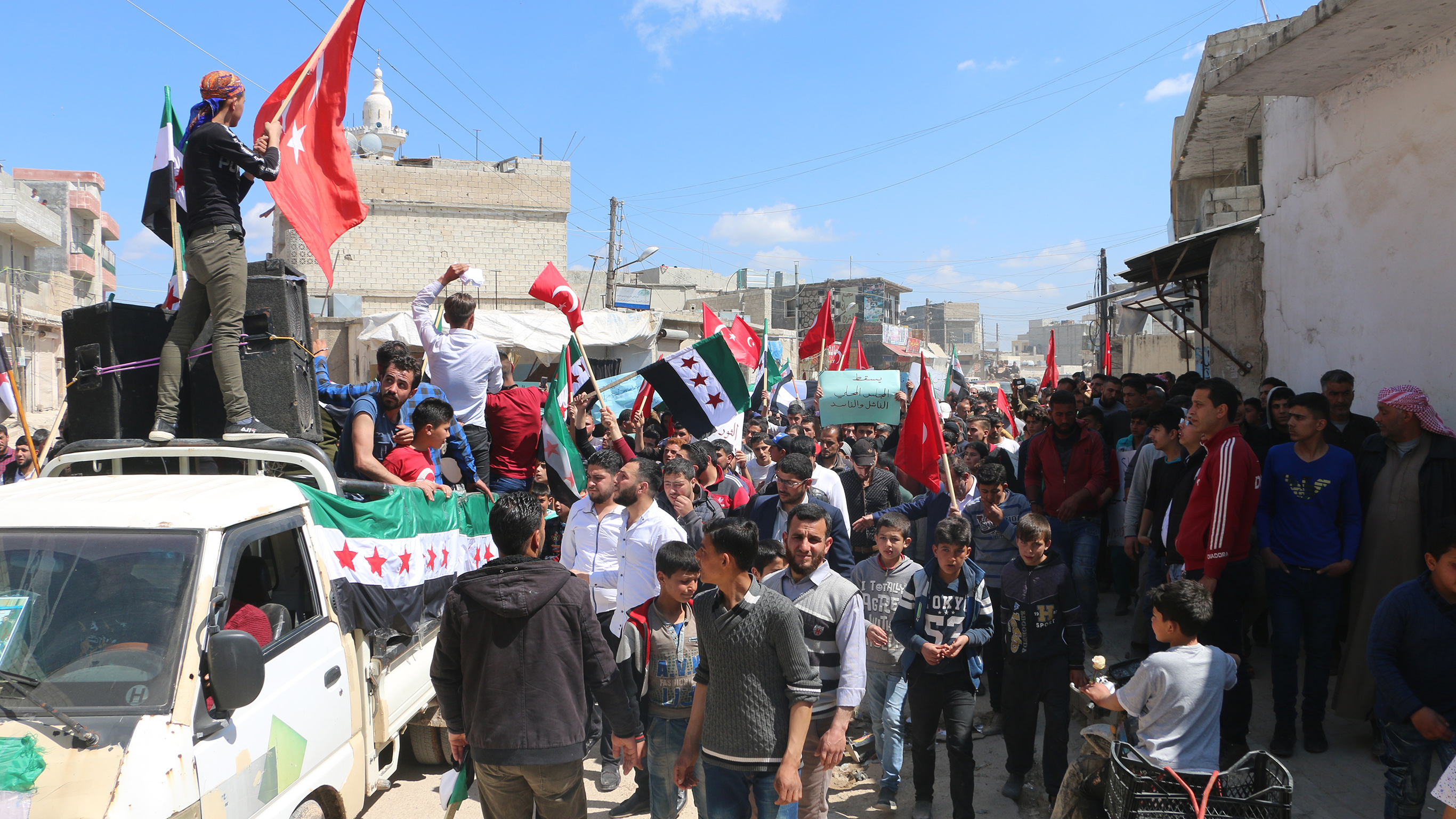 A previous protest was held April 5 in Suran, during which protesters demanded that the local council resign and raised banners that read “The local council has no legitimacy” and that called for the council's removal.

Abd Alkader Mohamed, a media activist in the city of Suran who took part in the April 12 protest, told Al-Monitor, “It is the people’s right to demand that change be achieved. The resignation of the current local council is a main demand, because its current head and members have been in their posts for more than two years now, while their term was supposed to end a year ago.”

He said, “The local council’s bylaws stipulate that the council’s term extends over one year only, to allow new elements to have access to the council via transparent local elections. The council ignored these demands, leaving the people with no option but to take to the street to have their demands fulfilled.”

Bassam Hamsho, also a protester, told Al-Monitor that the local council has opted for a policy of exclusion, and only those who are close to its members and head are being hired in the various public service departments that are affiliated with the council. He said the administrative and financial corruption needs to stop at the council. “We will continue to protest every Friday until our demands, which we perceive as legitimate, are met. The council will be compelled to yield to the people’s will at the end of the day,” he said.

Ibrahim Bakour, who also took part in the protest, told Al-Monitor that a poor job is being done in providing basic services such as water, sanitation and baked goods in Suran and its countryside.

He said this is still occurring even though “there were previous demands that the council enhance basic services. Yet the services have remained substandard,” he said. These demands started to be made in early 2019, and protesters then took to the streets, he said.

The protesters in Suran include notables from the city and surrounding towns. They told Al-Monitor that they have already shared with officials in Turkey’s Kilis the demand for better services, and asked the Turks to step in to have the local council dissolved and a new one elected. The protesters said they are still waiting for the Turkish side to act.

Mohammad Ibrahim Eido, the head of Suran’s local council, told Al-Monitor that the local council appreciates the demonstrators’ good faith and their demand for improvement in living conditions and services. He said he has respect for their demands and protests.

Tamer said, “The local council is being fully functional and is using every available means to improve services in the city." But he said, "It cannot enhance the services unless additional capabilities are made available. We are trying as much as possible to prioritize the provision of services and we promised the demonstrators that public services will be improved in the near future.”

Tamer refrained from commenting on the question of whether or not the council will resign or a new council will be elected.

In al-Bab, hundreds of protesters have joined the Friday protests in the past two months, demanding that the local council and security and services institutions fight corruption. The protesters demanded that the local council resign and that a new one capable of providing them with services such as electricity and water be elected. The protesters also accused the council of corruption and theft and chanted slogans against corruption, stressing that the people are the main source of power.

Mohamed Jebara, a member of the al-Bab coordination office [The coordination offices are gatherings spread in the Syrian cities and towns since the beginning of the revolution and not only in al-Bab. Since then they have been organizing protests against the Syrian regime], told Al-Monitor, “Holding accountable those who are corrupt in the security institutions such as the military police and the judiciary and bringing about reforms in these agencies are among the demands made in our demonstration.” He added, “The protesters also demanded that free elections be held in order to have a new local council for al-Bab.”

“The services provided are terrible, and the council’s head and members are holding onto to their posts in an unbelievable way. They are preventing power rotation and young people from contributing to the development of services and succeeding them,” he said.

Earlier, protests did have success in the city of Azaz in the northern Aleppo countryside. Demonstrations in protest against poor services began Aug. 1, and demands were made that the local council resign. After the council refused to meet the demonstrators' demands, people staged a sit-in in front of the council’s building, accusing the council of corruption. The protest ended in late August after an agreement was made to dissolve the council and form a new one through a consensus among the city’s notables.