With the opening of al-Rai border crossing in northern Aleppo, authorities there hope to develop trade activities with Turkey and later allow travelers to move freely between the two countries. 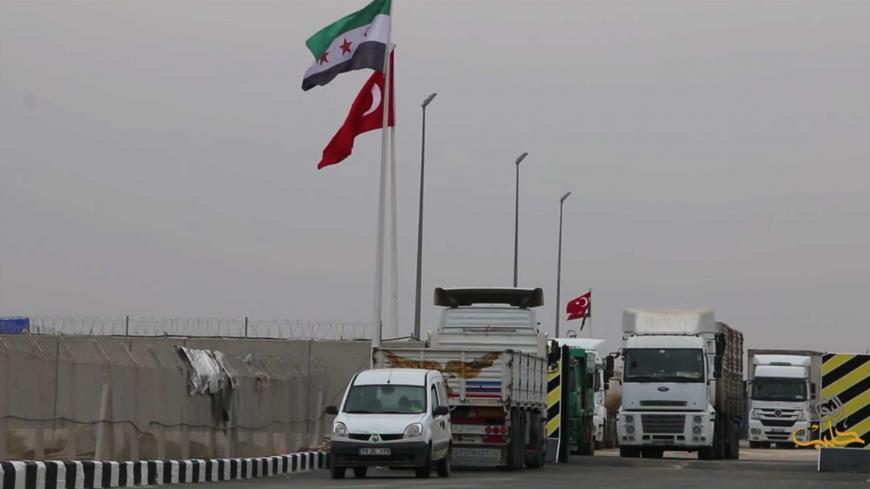 The al-Rai border crossing between Syria and Turkey seen in a still taken from a video uploaded Dec. 20, 2017. - YouTube/Halab Today TV

ALEPPO, Syria — Syria's al-Rai border crossing with Turkey has opened for business and is bustling. The roads are paved, there's an administration building and prefabricated halls for truck inspections line each side of the yard.

The crossing lies a little more than half a mile northeast of al-Rai, a small town in northern Aleppo governorate. The local council announced the opening Dec. 16. Attending the ceremony were Seljuk Aslan, deputy governor of the southern Turkish city of Kilis, and Imad al-Din Khamis, deputy head of al-Rai local council and director of the border crossing, as well as representatives of the opposition-affiliated Syrian Interim Government, which now controls the crossing.

Al-Rai is part of the area liberated from the Islamic State earlier this year during Operation Euphrates Shield, a Turkish military intervention aided by the Free Syrian Army.

Turkey had announced Nov. 28 its intention to open al-Rai crossing, also known as the Cobanbey crossing, for commercial use. In a statement that day to Anadolu Agency news, Aslan said Kilis authorities were developing commerce between their city and the Syrian cities and towns located in the Euphrates Shield area, as Kilis is adjacent to Azaz in northern Aleppo.

Aslan noted that since security was re-established and commercial life has returned in this area — home to about 1 million Syrians — opening the crossing became necessary to allow companies to transport reconstruction materials. The Bab al-Salam crossing, 3 miles north of Azaz, and the Jarablus crossing on the Turkish border have already reopened.

Based on inspection of goods, the tax to be paid by the importer is assessed by officials from al-Rai local council and the opposition’s National Police and Public Security Forces. When Al-Monitor visited recently, there were more than 40 trucks parked in the yard, some of which carried canned food and biscuits, while others were loaded with clothing and related materials, and a number of trucks carried cement and iron.

"The process for entering goods through the crossing is very smooth," Issa al-Sheikh, a truck driver from al-Bab, told Al-Monitor. “I have three truckloads of cement that will cross into the Euphrates Shield area in an hour after being inspected. The staff is very professional and the transit time is very efficient.”

Khamis of al-Rai local council said that the group directly supervises management of the border crossing, which was opened under the patronage of the Syrian Interim Government. Trucks started coming in from Turkey on Dec. 17, the day after the ceremonial opening.

“Exactly 975 types of commercial goods including foodstuffs and building materials are included in a list of products allowed to enter through the crossing from Turkey to ​​the Euphrates Shield area. Commercial movement is currently restricted to imports only. The crossing will soon activate exports, and agricultural crops will top the list of goods that can be exported from the Euphrates Shield [area] to Turkey,” Khamis told Al-Monitor.

“We are discussing with the Turkish government the possibility of allowing travelers to pass through the crossing," he added.

Sometimes more than 50 commercial trucks cross in one day and Khamis expects that number to increase to 100 trucks a day in 2018. The crossing is open six days a week.

Taxes on goods passing through all three crossings will be handed over to the treasury of crossings established by the interim government.

Turkey contributed financially to al-Rai crossing in early April and amended the classification to a commercial crossing in May, allowing it to receive a wider variety of goods once it opened, Khamis said. Turkey also developed the Jarablus and Bab al-Salama crossings by providing logistic support and training.

The crossing's location is distinct because of its proximity to al-Bab, one of the largest cities in terms of area and population and a valuable strategic site in the Euphrates Shield area in northern Aleppo. Turkey has provided modern facilities and equipment to manage the crossing, which is expected to receive an increasing number of commercial trucks and help move the reconstruction process forward.