Turkish trucks have been entering Syria through the recently opened Bab al-Salam crossing, to the protests of Syrian truckers and shippers. 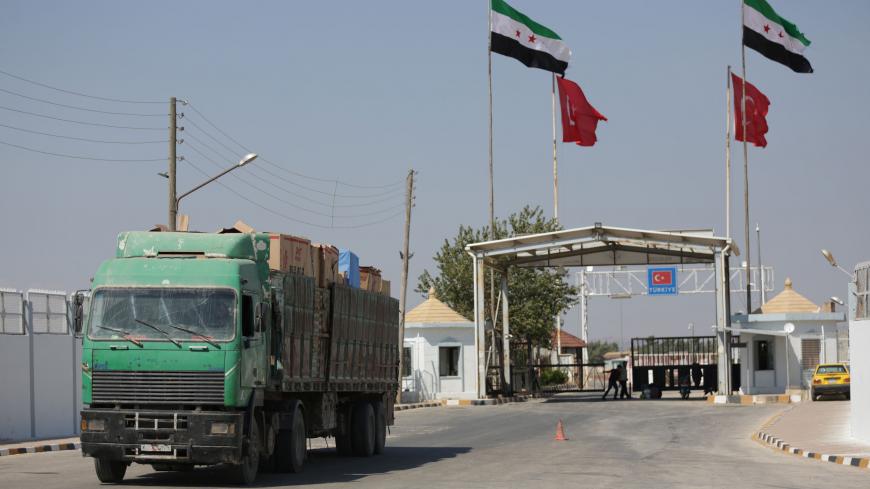 ALEPPO — Turkey has reopened the Bab al-Salam/Oncupinar border crossing with Syria to Turkish truck traffic, effectively cutting half a workday off some truckers' delivery times. Turkish trucks had not entered Syria through the gate for nearly eight years for security reasons following the outbreak of the Syrian civil war.

On March 5, Turkish authorities gave trucks laden with goods the green light to cross into Syria's Aleppo province via the Bab al-Salam/Oncupinar crossing. Their cargoes now can be driven through the Syrian area controlled by the Turkish-backed Free Syrian Army (FSA). Previously, once Turkish trucks reached the crossing, their goods were transferred onto Syrian trucks.

Anadolu quoted a truck driver as saying, “We had [previously] unloaded trucks in the buffer zone to be loaded onto Syrian trucks, but now we cross the border and unload the trucks directly where we need to.”

The alternative to this unloading-loading process had been to use al-Rai crossing, which allowed trucks to enter Syria, but this then required a lengthy drive to reach their destinations in al-Bab, Azaz, Marea and other FSA-controlled areas.

Anadolu quoted a Turkish official in the transport sector as saying, “Thanks to the opening of [Bab al-Salam/Oncupinar crossing] for direct transit, the drivers and transport companies can shorten their distance and time. We needed four hours to reach Azaz, and now it only takes us 15 minutes.”

Not everyone is pleased with the change, however. The development has angered Syrian truck drivers, owners of shipping companies and employees.

Mohamed al-Taweel, an official at an Aleppo freight company, told Al-Monitor that the old system of transferring cargo from Turkish to Syrian trucks "required frequent unloading and loading [and] provided job opportunities for hundreds of Syrian workers" as well as drivers. "They now believe the decision to allow Turkish trucks to cross poses a threat to their livelihoods.”

Dozens of drivers and owners of Syrian shipping companies took to the streets of Azaz to protest the decision March 5. Similar protests organized the next day in the city of al-Bab demanded that Turkish and Syrian officials reconsider the decision.

Truck owner Sultan Fayez told Al-Monitor he believes the change will prevent hundreds of Syria families from covering living expenses and will contribute to rising unemployment in Aleppo province.

“Each truck supports about three families, and there are hundreds of trucks in the ... area that will be put out of work,” Fayez added.

Bab al-Salam crossing administrators are trying to reassure truckers and workers that they will not all lose their jobs — that only a few will be affected. The administrators also say that Turkey's decision will have a positive impact on residents in Aleppo’s countryside as the prices of goods will decrease due to lower transport costs.

Ibrahim Derbala, director of the commercial office of the Azaz local council, told Al-Monitor, “Allowing Turkish trucks to cross into the countryside of Aleppo is good and has positive repercussions for the people of the area in terms of lowering shipping costs and consequently lowering the prices of imported goods. This was one of the traders’ demands and it has been met.”

Brig. Qassem Qasim, director of the Bab al-Salam crossing, told Al-Monitor, “Some Turkish trucks are still unloading their cargo inside the crossing, and the goods are loaded onto Syrian trucks to enter into Syria. A large part of the goods imported from Turkey are shipped to areas controlled by the regime and the Syrian Democratic Forces. Turkish trucks are prevented from entering these areas, so it is up to Syrian trucks to transport the goods.”

He added, “Syrian truckers and workers still have opportunities. The decision did not deprive them of their jobs. Only a small group is affected. Truckers whose trucks are not registered with the regime [still] cannot drive to areas under its control."

Like Derbala, Qasim noted, “Allowing Turkish trucks into Syria ... contributes to reducing the prices of many goods and foodstuffs imported from Turkey, including iron, cement, biscuits, canned goods, electrical equipment, clothing, textiles and others. For example, the price per ton of cement is now at $45 [23,000 Syrian pounds], but before Turkish trucks were allowed in, it was $55. This $10 difference amounts to the cost of unloading Turkish cargo and loading it back again on Syrian trucks.”

Qasim added, “Around 20 Turkish trucks used to enter the commercial area at the crossing per day. Now, 100 trucks make it into Syrian territories every day as more traders are looking to enter the goods from Turkey through the crossing.”