Barzani: Russia key to settlement between Assad and Syrian Kurds

Manbij leaders prefer the United States, but would rather deal with Russia and Syria than Turkey; Amberin Zaman gets exclusive access to a prison for IS terrorists; did HTS force the resignation of a Syrian opposition leader?; Syrians protest Turkish truckers; Rouhani’s meeting with Sistani is "crowning achievement" of trip to Iraq. 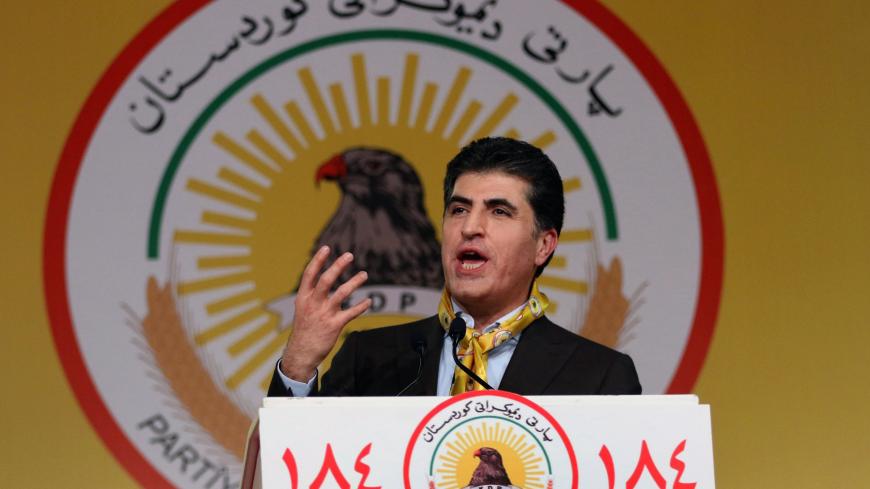 Russia will defend Manbij if US leaves

“Russian forces will defend the contested majority-Arab town of Manbij in northern Syria against Turkey if and when US forces withdraw under the terms of a verbal agreement struck two days ago between Russian commanders and the Manbij Military Council,” reports Amberin Zaman, the first to break the news last week from this pivotal border town in Syria.

“Fears of a Turkish invasion grew when President Donald Trump announced in December that US troops would be pulled out of all of Syria within 30 days,” writes Zaman. “Around 300 Syrian regime forces deployed near Manbij in Arima in response to the YPG’s [Peoples Protection Units] calls to help them stave off a Turkish attack. Trump has since said around 400 US forces would remain in Syria and [Manbij Military Council Co-Chair Mohamed] Mustafa said there were no signs of a US withdrawal from Manbij so far. ... But if they did leave, regime forces would ‘definitely’ move in together with the Russians, he said.”

“Given a choice, all of the Manbij leaders who spoke to Al-Monitor said that they would rather have the Syrian regime come than Turkey,” concludes Zaman, “but that the best outcome would be for the Americans to stay.”

In an exclusive interview with Al-Monitor, Nechirvan Barzani, the prime minister of the Kurdistan Region of Iraq, said, “The Kurds of Syria should try to find a solution within the framework of a united Syria. They should be engaging in dialogue and negotiations with the regime.”

“It's not a matter of ignoring the Americans,” Barzani told Amberin Zaman. “The reality is that the regime is still there and that the Kurds of Syria should be talking with the regime in order to gain certain rights. … Currently the regime feels that it has the upper hand, but the reality is that there is still a lot of instability in Syria. The minute the government regains sovereignty over all of Syria there will be more stability and the regime will feel confident enough to give the Kurds their rights. The regime will need to deal with the reality that the Kurds are there, that they exist and they have power, they control territories and they have to find the way to solve their problems with the Kurds.”

Asked who can be the guarantor of a deal between the Syrian Kurds and the Syrian government, Barzani replied, “Us to a lesser extent, we are ready to step up to the plate. But this role can be played even more effectively by the Russians. It's important for all of us to have a stable neighbor such as Syria, but it's especially important for Russia. They are very clear on this point. Their strategy is geared toward securing a stable Syria. They can be key players in negotiating a settlement between the Kurds and the regime.”

This column wrote in January, picking up this trend we have covered since 2016, “The bumpy and treacherous road to alleviating Turkish concerns over the People's Protection Units (YPG) and the Democratic Union Party (PYD) ultimately goes through Damascus via Moscow.”

Zaman was the first reporter for a Western media outlet granted access to the Derik Central Prison for Terrorists in northeastern Syria, where 400 Syrian Kurdish guards guard the same number of captured Islamic State fighters.

The conditions at the prison appeared “too good to be true,” Zaman reports. “There are other interrogation centers where IS fighters who either turn themselves in or are captured go through initial screening. It's hard to believe that conditions there are quite as clement, considering the brutality inflicted by IS on the Kurds.”

“The issue of what to do with captured foreign fighters is an increasingly pressing one as Western governments refuse to take their nationals back,” writes Zaman. “The Syrian Kurdish administration says it cannot cope on its own and is demanding that they be either repatriated to be prosecuted in their home countries or tried by an international tribunal in a northeastern Syrian court.”

“A US official speaking on condition of strict anonymity because of the sensitive nature of the issue confirmed that no funds had been given by the United States to the Syrian Kurds to care for the IS captives,” Zaman reports. “The cost of just feeding and clothing inmates at the Derik facility is in excess of $20,000 per month,” the director of the facility told Zaman.

Turkey tries to broker deal among FSA, SNC and HTS

“Some have linked Abu Hatab's resignation to the expanding influence and control of Hayat Tahrir al-Sham (HTS) and its political arm, the Syrian Government of Salvation, over most of the areas previously administered by the Interim Government in Idlib province,” writes Al-Khateb. “Abu Hatab’s departure follows shortly after HTS in early February took over opposition-controlled areas in Idlib, the neighboring northern countryside of Hama and the western countryside of Aleppo, in the process ousting factions of the National Liberation Front (NLF) of the Free Syrian Army (FSA).”

“An FSA source told Al-Monitor on condition of anonymity that deliberations have been underway in Idlib since the beginning of February between HTS, the FSA and the SNC,” writes Al-Khateb. “’These deliberations aim to merge the Interim Government and the Government of Salvation into one government to manage the affairs of the opposition-held areas in northwestern Syria,’ the source said. Talks also focused on efforts to unite the ranks of armed factions in northern Syria under one structure to be agreed upon. The source added, ‘These are efforts exerted by Turkey to contain HTS and its Government of Salvation. These efforts aim to put an end to HTS peacefully, by pushing it to disband and join the FSA, and to create one civil administration for the opposition-held areas.’”

“Turkey has reopened the Bab al-Salam/Oncupinar border crossing with Syria to Turkish truck traffic, effectively cutting half a workday off some truckers' delivery times,” Al-Khateb reports. “Turkish trucks had not entered Syria through the gate for nearly eight years for security reasons following the outbreak of the Syrian civil war.”

“Not everyone is pleased with the change,” adds Al-Khateb. “The development has angered Syrian truck drivers, owners of shipping companies and employees. … Dozens of drivers and owners of Syrian shipping companies took to the streets of Azaz to protest the decision March 5. Similar protests organized the next day in the city of al-Bab demanded that Turkish and Syrian officials reconsider the decision.”

Meeting with Sistani “crowning achievement” for Rouhani in Iraq

“The crowning achievement” of Iranian President Hassan Rouhani’s visit to Baghdad last week “was his unprecedented March 13 audience with Grand Ayatollah Ali al-Sistani in Najaf — the first time that a sitting Iranian president has met with the top cleric,” an Al-Monitor correspondent reports. “Sistani ‘welcomed any step to strengthen relations between Iraq and its neighbors as per mutual interests and on the basis of respecting the sovereignty of states and non-intervention in internal affairs.’ He also ‘expressed the necessity for balanced and moderate regional and international policies in this region to avoid further tragedies and damage.’"

“Against this backdrop, the supreme religious authority’s decision to grant Rouhani and Zarif an audience informs Iraqi leaders that they must engage with the Rouhani administration, even if they rely on support from rival centers of power in Tehran, such as the Islamic Revolutionary Guard Corps (IRGC),” adds the correspondent. “Moreover, Rouhani’s achievements this week ought to have made it clear to the Trump administration and its Arab allies that Iran will neither abandon nor be kicked out of Iraq, although this should not be interpreted as Baghdad siding with Tehran over Washington.”

“Rouhani's trip brought great benefits to Iran at a time that its economy suffers significantly from US sanctions,” adds Ali Mamouri. “The final joint statement of the two countries highlights what was agreed, including waiving visa fees between the two countries from April onward, expressing agreement on the 1975 Algiers Agreement, dredging Shatt al-Arab, connecting the railway system between both countries in order to secure Iran’s connection to Syria via Iraq and several other economic agreements. Iran also received $200 million from Iraq for part of its debt to Iran for the import of electricity and gas.”