Turkish truckers try to get on the road again

With the dangers and difficulties now inherent in transiting in Iraq and Syria, the Turkish transportation sector is looking for alternative routes to Middle Eastern markets. 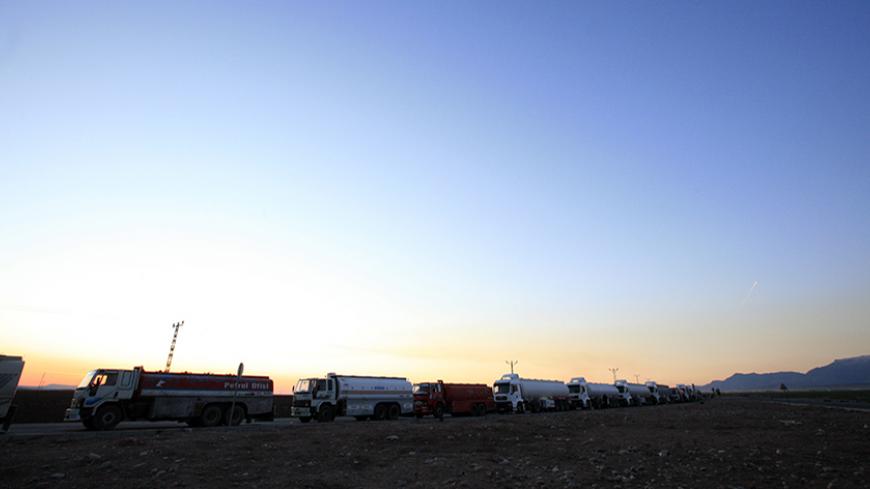 Turkish trucks and tankers queue on a road leading to the Habur border gate in southeastern Turkey, before crossing into Iraq, Feb. 23, 2008. - REUTERS/Fatih Saribas

Miscalculations by politicians are making life difficult for thousands of truckers trying to make a living off Middle Eastern roads. Turkish transporters now find themselves in dire straits after the closure of roads first in Syria and now in Iraq.

In June, when the Islamic State (IS, formerly the Islamic State of Iraq and al-Sham) took 31 truck drivers from Turkey hostage, there had been more than 11,000 Turkish trucks — mostly huge 18-wheeler semis popularly known as TIRs — on Iraq's roads. IS members had already established themselves as the supreme bandits. Any trucker not paying IS extortion money, called taxes, risked being kidnapped. According to a source who spoke with Al-Monitor, the drivers taken hostage had not paid their “taxes” for four months.

When Iraqi roads became dangerous because of IS, transporters began searching for alternative routes. Such roads, however, cannot simply be selected from Google Maps. Each one must be tested, with risks of crossing borders and driving through towns determined. Knowing how perilous some of these routes can be, it was surprising to hear that the International Transporters Association (UND) had dispatched seven trucks to look for new routes. Their objective was to test the security along alternative routes to Baghdad and Basra given the closure of the traditional roads from Mosul and Kirkuk.

Cetin Nuhoglu, chairman of the UND, told Al-Monitor that his organization was interested in two new routes. One is a route to Baghdad from Sulaimaniyah in the southeast Kurdistan region that runs parallel to the Iranian border. The other is a route through Iran from Turkey’s Gurbulak border crossing to Baghdad and Basra. Nuhoglu described the current situation as follows:

We have no problems reaching the Kurdish region. Anyhow, 50-60% of our cargo [goes] to the Kurdish region. Daily transit of trucks from Turkey to Iraq used to be around 2,200 [trucks]. After the IS threat, it is now 1,500-1,600. Our loads were [further] shipped to southern Iraq by Kurdish and Arab trucking companies, but now the Iraqis cannot carry our goods to the south. That is why we are studying the route that enters Iran from northern Iraq and then re-enters Iraq and reaches Baghdad.

The second option could be to enter Iran at the Gurbulak-Bazergan crossing and deliver the cargo to Iraqi truckers at the Mehran crossing. Iraqis would then carry Turkish products to Baghdad, Basra and other southern towns of Iraq. Trucks entering Iraq from Mehran can easily travel to Basra, 500 kilometers [311 miles] away. Today, 25 trucks are exiting from Gurbulak to use the Iranian route. About 100 trucks a day enter Iran from northern Iraq to go south.

We are also looking at roads inside Iraq from Sulaimaniyah to the south, but it is problematic. Normally, we should be able to reach Basra this way. What we are doing on the Mosul route is this: We take the cargo through Turkey’s Habur crossing to Duhok. From there, Iraqi truckers take it to the south. We are also looking into the possibility of shipments to Iraq via Jordan. Since the Syrian crossings are closed, our TIRs are transported to Israel’s Haifa port with roll-on, roll-off ferryboats and from there to Jordan by road.

An additional concern is the issue of cost. Drivers who continue to transport goods south, risking encounters with IS, want more money. According to Serif Ercument Aksoy, president of the Turkey-Iraq Business Council, these TIR owners are now asking for $7,000 instead of the usual $3,500. It is reported that some 550 companies have suspended their operations because of security risks or increasing costs.

The alternative routes Turkish transporters have been using for the past three years because of the war in Syria are complex. In the past, trucks could easily reach Jordan and Saudi Arabia and other Gulf states via Syria. Today, however, the only place Turkish trucks can reach in Syria is the free zone, between Turkey’s Hatay-Cilvegozu crossing and Syria’s Bab al-Hawa crossing. From there, Turkish products are transported to different parts of Syria by local trucks.

This route, however, does not offer the opportunity of transiting shipments to other countries. For now, the Egyptian route is being used to reach the Gulf countries. Nuhoglu said this is costlier and frequently involves problems that disrupt shipments.

Nuhoglu told Al-Monitor, “The Ro-Ro line via Egypt is not attractive because of its high costs and the time it takes. Costs go up two, three times. For example, it used to cost $3,000 to send a truck to Dubai via Syria. To go there via Egypt now costs $9,000. This is why the number of trips on that route is declining. In 2013, we made 11,000 trips to Gulf countries. Now, the monthly trips have decreased to 500. When the costs are so high, Turkish products lose their competitiveness. Exporters are searching for alternative markets for their products.”

At the beginning of the crisis, the Turkish government decided to subsidize each vehicle by $1,000 to lower costs, but with Ankara’s political opposition to the anti-Muslim Brotherhood coup in Egypt, Turkish ships began to have problems at Egyptian ports. That is when Haifa became a somewhat more preferred transit point. The problem with that option, however, is that goods sent via Haifa can only go as far as Jordan. The Saudis do not allow entry of shipments via Israel. Thus, Turkish companies that insist on doing business with Saudi Arabia and other Gulf states have no option but to transit the Suez Canal and Egypt. Nuhoglu said a small number of shipments to Saudi Arabia are sent via Iran.

When the Egyptian company assisting Turkish TIRs across the Red Sea to Saudi Arabia’s Duba port temporarily suspended its operations, the route was paralyzed, leaving some 400 Turkish trucks stranded in Egypt and Saudi Arabia. The Ro-Ro ferry trips for trucks from Turkey’s Iskendurun and Mersin ports were suspended for a month beginning May 23. The TIR services are arranged by UND Ro-Ro in the Mediterranean, the Gulf Agency Company in Egypt and by United Marine Egypt in the Red Sea.

The reason Turkey’s veteran foreign trade and transport companies, which are actually paying the price of the Syria and Iraq quagmires, are carrying on without much fuss is their capacity for crisis management. The Turkish transport sector, which lost 80 drivers in Iraq after the 2003 invasion, is known for its spunk.