Turkey, Iran at war over trucking

A 1994 transportation accord has fueled Turkish-Iranian rivalry for economic and political influence in Central Asia. 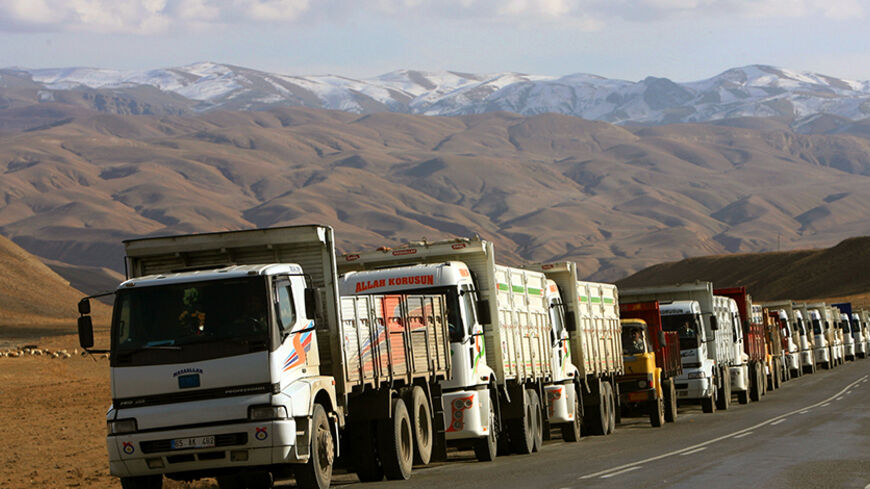 Hundreds of trucks bringing in diesel from Iran line up on a road as they head to the eastern province of Van in Turkey, Nov. 30, 2005. - REUTERS/Fatih Saribas

A trucking war has escalated between Turkey and Iran amid mutual retaliation and the latest round of talks in Tehran failing to produce a compromise. The two neighbors’ commercial rivalry, particularly for the Central Asian market, has further intensified with the trucking crisis. Thousands of Turkish trucks have been stranded on Turkey's side of the Gurbulak border crossing, waiting to enter Iran. Similarly, Turkish trucks returning home have formed long lines at Iran’s border crossing with Turkmenistan.

The truck transportation crisis began last year when Turkey made it clear it would no longer pay transit fees and a fee for the fuel price difference charged by Iran. Turkish exporters and transporters shipping goods to Central Asian countries prefer the Iranian route, because it is the shortest. Turkish trucking companies, however, are disadvantaged vis-a-vis their Iranian counterparts because of special charges and high tariffs that Iran levies only on Turkish trucks.

In the wake of the Soviet Union’s disintegration, the Central Asian countries of Kazakhstan, Kyrgyzstan, Tajikistan, Turkmenistan, Mongolia and Uzbekistan have gained strategic importance for Turkey in both economic and political terms. The region has emerged as a sphere of political influence for Ankara as well as a trade market of huge potential with the Central Asian states' adoption of market economies. Last year, Turkey’s total trade volume with the region totaled $9.3 billion. Turkish contractors worked on projects worth $62 billion, Turkish direct investment exceeded $3.5 billion, and some 2,000 Turkish companies operated in Central Asian countries.

Hence, the trucking war between Turkey and Iran stems from a rivalry for political and economic influence in a regional market that is economically pristine and hungry for investment. In its nuclear talks with the five permanent UN Security Council members and Germany, or P5+1, Iran hopes for a settlement that will put an end to all the sanctions against it. With this prospect in mind, it is seeking to advance a strategy aimed at increasing its clout in its neighborhood, namely, Central Asia and the Caucasus, and forestalling Turkey.

In 1994, Turkey signed a land transportation agreement with Iran under which it agreed that Turkish trucks passing through Iran would pay transit fees and a fee for fuel price differences, without requesting a reciprocal arrangement for Iranian trucks passing through Turkey. Hence, Iran today says it is simply adhering to the terms of an agreement that had been mutually ratified by national parliaments and in effect for two decades.

In remarks to Al-Monitor, Fatih Sener, executive chief of Turkey’s International Transporters Association (UND), said it was still a mystery why Turkey agreed to such a big concession in 1994. “Over the past decade, we have paid Iran more than $1 billion in transit fees. If things remain as they are, we’ll continue to pay billions of dollars. We don’t want to pay this money anymore,” Sener said. “The states have so far failed to reach an agreement. Turkish trucking companies can no longer tolerate the situation. Amid this competition, Iranian companies have been grabbing most of the cake in the transportation sector.”

Sener said that the Iranians are trying to take control of the European route, using their unilateral advantages under the 1994 accord and the much cheaper fuel prices in their country. In further remarks to Al-Monitor, he provided the following overview of the situation:

"Regarding shipments coming from the West, Iranian trucks enter Turkey without any load, go to the Bulgarian border, take cargo there and go back, and they still profit more than Turkish trucks. This is a grossly unfair competition! Under the transportation accord, we pay Iran 487 euros [$595] for a one-way transit passage. When negotiations over the past year and a half failed to produce a compromise, Turkey on Oct. 10 imposed a transit fee of 408 euros [$499] on Iranian trucks. Iran responded by raising its own one-way transit fee to 974 euros [$1,190] and doubling the fee for fuel price difference. The crisis grew as Turkey retaliated by doubling its transit fee.

"On Dec. 1, Iran announced that it would stop selling fuel to Turkish trucks and that their tanks would be sealed on entry at the border. Then the Iranian border crossing was closed and passage stopped. Negotiations are underway, but Turkish trucks are incurring losses in the meantime. I spoke to a driver who was taking summer clothes to Turkmenistan. He’s been waiting at the border for more than a month, and winter has already come to Turkmenistan. Who is going to buy those clothes now? The rule in transportation is 'first-come, first-cross.'​ Yet, Iran passed a law that gives Iranian trucks priority at customs. They keep our vehicles waiting, while theirs cross without delay. We are losing money and market."

Following Turkey’s retaliatory measures, Iran softened its stance a bit and stopped sealing tanks. One of Iran’s argument in the crisis concerns the fuel prices in the two countries — about $2 per liter in Turkey and 18 cents per liter in Iran. Citing the big difference, Iran used to charge $1 for every liter of fuel that remained in the tanks of Turkish trucks when they exited the country. In the latest crisis, Iran doubled this fee to $2 per liter, which prompted Turkey to toughen its stance.

Turkish trucking companies' costs have doubled, and competing with Iranian firms has become virtually impossible. To minimize their losses, Turkish companies unload their cargo at the Iranian border and hand it over to Iranian trucks.

According to Sener, Iran is close to finishing off the Turkish transportation sector, with Iranian truckers now controlling 85-90% of shipping in the Central Asian market, which Turkish exporters reach via Iran.

The UND, the main professional organization of Turkish transporters, who have the largest truck fleet in Europe, has offered proposals to resolve the crisis and raised demands from Iran.

Meanwhile, Turkey is also looking for ways to counter the economic losses inflicted by the turmoil involving its southern neighbors. With war and Islamic State (IS) terror plaguing Syria and Iraq, truck transportation to the Middle East and the Gulf via those two countries has virtually ground to a halt.

Judging by Iranian statements, Tehran’s conditions leave no room for compromise. The Iranian Embassy in Ankara has suggested that Turkish trucks pay the Turkish price for fuel in Iran, and Iranian trucks pay the Iranian fuel price in Turkey. Obviously, this proposal is unacceptable to Turkey. The row seems to have become an irresolvable tangle, with losses growing by the day.

As a result, Turkey has stepped up efforts to find alternative routes. Progress has been made in talks with Azerbaijan, Georgia and Turkmenistan to ship goods to Central Asia via the Caspian Sea. Under this option, two Ro-Ro vessels (roll on/roll off) and two ferries would operate in the Caspian to take Turkish trucks to Turkmenistan, from where they could travel on to other Central Asian countries. The annual capacity of this route, however, is only 30,000 trucks, while up to 45,000 Turkish trucks use the Iranian route annually. A shift to the Azerbaijan-Caspian route would effectively mean economic losses amounting to one-third of existing figures.

On the positive side, the new route would be cheaper than the Iranian one. In addition, Turkish trucks would be able to buy cheap fuel in Turkmenistan and thus become more competitive vis-a-vis Iranian companies.

Despite the trucking war, Turkey and Iran are seeking ways to boost bilateral trade, including a preferential trade arrangement facilitating the entry of 145 Iranian agricultural products to Turkey and 145 Turkish industrial products to Iran. Turkish President Recep Tayyip Erdogan’s forthcoming visit to Tehran, expected in January, is eagerly anticipated.