Traffic at the Turkish border crossings have come to a grinding halt after trucks en route to Russia, Belarus and Central Asia diverted routes to Turkey and Georgia following Russia’s invasion of Ukraine. 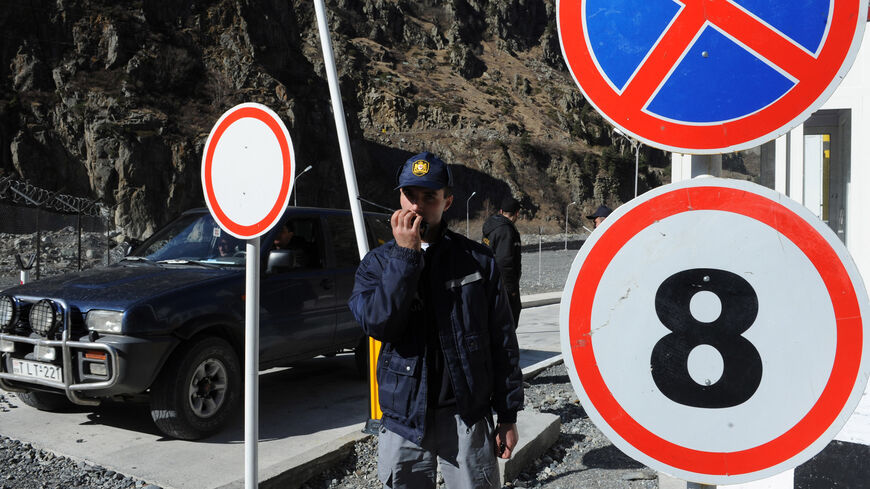 The Russian invasion of Ukraine and European Union restrictions on trucks from Russia and Belarus have tipped Turkey’s international transportation industry into a crisis with increasing costs and international freight trucks forming huge queues at Turkey’s border crossings. The kilometers-long lines at the three border crossings linking Turkey and Georgia have turned into an ordeal for truck drivers.

At the Sarp border crossing in Turkey’s northeastern town of Hopa over 500 trucks have formed a queue of at least 25 kilometers (15.5 miles). The line of trucks stretches 10-20 kilometers (6-12 miles) at another crossing in the eastern Turkish town of Ardahan. Officials and industry representatives’ figures on the number of trucks able to cross the border daily is conflicting. While officials said some 800 trucks are crossing the Sarp pass daily, according to Turkey’s International Transporters Association (UND), no more than 500 trucks passed through the crossing in the first three weeks of April.

Other border crossings in the Caucasus region have also been fraught with delays. Drivers leaving Russia have been reportedly enduring delays up to 12-15 days to cross into Azerbaijan or Georgia with only 200 trucks passing through the crossings daily. The security concerns stand as the major reason for the delays on Russia's end. The situation at the Verkhniy Lars crossing linking Georgia and Russia is said to be particularly grim as ongoing maintenance work at the crossing and harsh weather conditions exacerbate the delays.  Before the war, trucks were using Ukrainian territory to reach Kazakhstan, Uzbekistan, Tajikistan, Kyrgyzstan, Turkmenistan and Mongolia.

Abdullah Ozer, board member of the UND, warns that the crisis is worsening as the impact of the Western sanctions against Russia pitches in gradually. “We are heading toward a major dead end,” Ozer told Al-Monitor.

He said that two major road and sea freight routes were shut down by the war in Ukraine, forcing transportation companies to opt for costlier and longer alternatives. The main route for freight deliveries to and from Russia and Belarus through Bulgaria, Romania, Moldova and Ukraine has been shut down since the start of the war. The cost of the route that takes seven days was $3,500 and it was used by more than 16,000 trucks in 2021. Similarly, the freight ferry route between Turkey’s Black Sea town of Karasu and Ukraine’s Odessa port, which was used by more than 14,000 vehicles in 2021, has also been closed.

Alternatively, freight trucks have been using Bulgaria, Romania, Hungary, Poland and Latvia or Belarus to reach Russia since the beginning of the war, in a route that costs some $6,000 and takes 11-12 days, according to Ozer.

Georgia has also become an alternative transit country now. The number of trucks waiting at the Sarp border crossing has reached more than 1,500. Ozer said the majority of them are with foreign license plates. “In 2011, 95% of the vehicles at Sarp had Turkish license plates. We lost our supremacy,” he noted.

Before the war, trucks were able to reach Russia via Georgia in 15 days at a cost of $4,250. The jam has doubled the duration and almost tripled the cost. Ozer said some trucks that left Turkey at the beginning of the war have still not returned. A truck that is stuck on the road for 45 days costs around $6,000, he explained.

According to Ozer, in addition to war, political tensions between Ankara and Moscow also exacerbate the troubles of the Turkish drivers.

“The ordeal is immense. Some 5,000-6,000 vehicles are waiting for their return either in Georgia or Russia. The jam at the crossings is growing,” Ozer said, adding that trucks with Turkish license plates could be stuck at the Verkhniy Lars crossing for up to 45 days because of “discrimination by the Russian police.”

Arguing that trucks with license plates from Uzbekistan, Kazakhstan, Armenia and Georgia have been given priority, Ozer said some drivers were resorting to bribing the officials to end the ordeal.

“The police have turned this into a profit. If they take $100 from trucks with foreign license plates, they take $500-$600 from the Turks.”

Mehmet Ali Gursoy, another sector representative, concurred. “When a [political] problem arises in ties with Russia, the border gate gets immediately paralyzed. The same happened when the Russian fighter jet was shot down,” Gursoy told Al-Monitor, referring to Turkey’s downing of a Russian fighter jet in Syria in 2015.

“Russia is openly intimidating. More than 3,000 vehicles have formed a queue of 80 kilometers [50 miles],” he said. Gursoy also criticized Ankara for letting Moscow go uncondemned and failing to meet the needs of Turkish drivers stuck in Russia and other countries.

He noted that their call on the Turkish government for measures to alleviate the problems have gone unanswered. “Drivers have been waiting for 45 days. Access to water, food and clothing is a problem. Turkey, which has managed to deliver aid as far as Somalia, has failed to take care of our drivers who endure miserable conditions,” he added.

Azerbaijan stands as an alternative but costlier transit route. The Azerbaijani authorities charge Turkish trucks $500-$700 for transits, depending on the weight and type of their cargo. Russian and Iranian trucks, meanwhile, can use the Azerbaijani territories for free.

He noted that the Turkish international transportation industry is bracing for another challenge in deliveries to and from Central Asia, as Turkey is about to fill the annual quota of 8,000 vehicles that Kazakhstan has given. Turkish trucks will have to reach Kazakhstan through the Caspian Sea, which in turn will increase the transportation costs by some $2,500 for each truck.

The sector representatives have criticized the government for failing to solve the crisis despite having ways and means to solve it. Ankara, in turn, blames the jam at the border gates on the increase in Turkey’s exports. The growing outcry forced Trade Minister Mehmet Mus to visit the Sarp border gate. Speaking at the crossing, Mus attributed the pileup to the increase in Turkey’s exports and rising temperatures, adding that the government was “taking measures.”

According to Ozer, those measures have yet to improve the situation on the ground. He listed the demands they conveyed to the minister as follows: Custom controls need to be concluded at local customs stations before vehicles reach the crossing to keep the flow going; shift changes need to be conducted in a way to prevent the time loss; minimum entry and exit quotas need to be set; Turkmenistan needs to be convinced to open its borders; transits through Azerbaijani territories need to be free to Turkish trucks; freight ferry fees between Azerbaijan and Kazakhstan need to be lowered; and high-capacity freight ferry lines between Russia and Turkey need to be launched.

The Sarp border crossing was renovated to accommodate 500,000 trucks and 3 million passengers annually. Yet, due to a design flaw, some 30 vehicles are enough to paralyze the functioning at customs, Gursoy said, adding that the number of staff also needs to be increased.

Sector representatives also demand a new border crossing between Turkey and Georgia. The Turkish government’s plans to launch a new crossing linking the two countries in 2013 haven’t been materialized yet due to infrastructural problems on the Georgian side. Yet, according to Gursoy, Ankara has capacity to solve this problem on the Georgian side by $20 million in financing.

Both Ozer and Gursoy believe that Ankara deliberately stops short of solving these problems as part of a strategic calculus to create a rush for the railway lines that are planned to be built as part of China’s Belt and Road Initiative.