Turkey's leg of the Silk Road could be smoother

Turkish officials are playing up the Baku-Tbilisi-Kars railway as a segment of the new Silk Road linking Beijing to London, but there are many bumps yet to come along the way. 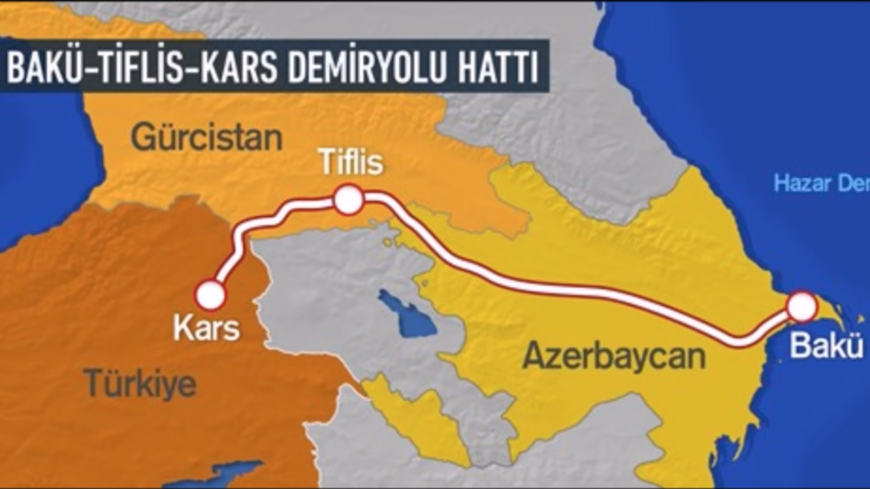 A map shows the route of the BTK railway, taken from a screenshot from video uploaded Oct. 30, 2017. It goes from Baku, Azerbaijan (seen on the map as Azerbaycan), through Tblisi, Georgia (seen on the map as Tiflis, Gurcistan), to Kars, Turkey. Some organizations did not participate in BTK financing because the shortest route through Armenia (the unnamed country on the map below Georgia) was bypassed in favor of Tblisi for political reasons. - YouTube/NewsNews

Turkish politicians and the media tend to quote staggering numbers when discussing strategic equations, as they are doing now regarding the BTK railway project connecting Baku in Azerbaijan, Tblisi in Georgia and Kars in Turkey. The 527-mile leg contributes to China's work in progress, the Silk Road route to connect Europe and Asia.

The BTK, which has been in the works since 1993, was finally inaugurated Oct. 30 in the new Port of Baku at Alat, actually 55 miles from Baku. The presidents or prime ministers of Turkey, Azerbaijan, Kazakhstan, Uzbekistan and Georgia attended the ceremony. No doubt, this is not a project to ignore. It may offer new economic opportunities to the countries using it.

But from the official bombast, one would think these trains, instead of rolling on rails, might be flying. Some of the claims include:

Turkish President Recep Tayyip Erdogan repeated these figures in his speech at the ceremony to officially launch the project, saying it will provide not only economic benefits, but will contribute to peace, security and stability. “We are hereby declaring the opening of an uninterrupted railroad track from London to China,” he said.

What is the real situation of the "unbroken, uninterrupted" railroad from Asia to Europe? Can it really be an alternative to the Russian route?

There are still some difficulties on the BTK leg. Cargo departing from China faces the first interruption when it reaches the Caspian Sea via Kazakhstan and Turkmenistan. Here, trains are transferred to the Port of Baku at Alat via roll-on/roll-off ferries. Then by rail they pass through Georgia to reach Turkey. Trains halt at Istanbul’s Pendik district before reaching Istanbul's city center.

There are also unsolved problems in the passage from Asia into Europe. Turkey’s project to upgrade the Sirkeci-Halkali line on the European side has been dragging on for 13 years. There simply is no line operating yet on the 47-mile route. There are financing problems, and it appears nobody knows when it will be completed.

And then there are questions about whether the 8-mile-long Marmaray Tunnel under the Bosporus will be able to handle heavy cargo trains. In the meantime, nobody is mentioning the infrastructure problems between Kars and Ankara in Turkey. Lots of upgrades and repairs are required on this single-track route. Of course, such connection and infrastructure issues can be overcome over time, but today a train from Beijing cannot reach London without interruptions.

Moreover, the claim that the BTK will be an alternative to the Russian route is exaggerated. Today, trains from Beijing can already reach London in 17-18 days via Russia. On the unbroken Russian route, trains are guaranteed a transit speed of 621 miles per day.

Although Turkey touted the BTK as the most important leg of the Silk Road, China did not participate in the inauguration, and nobody asked why. China was clearly signaling it was distancing itself from the BTK project. Although China contributes to financing of various segments of the Silk Road project, which it calls the "Belt and Road,” it stayed away from BTK financing.

Some think China's reticence stems from its discomfort with Turkey’s position involving the Uighur issue in East Turkestan (in China's Xinjiang province). Some think China finds the BTK route not feasible and economically inefficient. Turkey’s persistence on routing the BTK via Georgia's capital of Tblisi instead of Armenia’s Yerevan because of political tensions between the two countries also discouraged European financing sources. The European Bank for Reconstruction and Development and the World Bank decided not to participate. Skirting Armenia made the route longer.

China is not without an alternative. The 7,456-mile London-Beijing connection became operational via Russia in April. This route follows Kazakhstan, Russia, Belarus, Poland, Germany, Belgium and France and completed its first trip in 17 days. The line splits in France, with one leg heading to Britain and the other to Spain. In other words, under current conditions, China is reaching Europe without interruptions anyway. Academic Muhdan Saglam told Al-Monitor that China uses sea, air and rail for its shipments, with the railway via Russia being the only current rail connection. China prefers to make progress on its own “Belt and Road” project. It is already building a port in Pakistan for its own use.

Saglam noted there are still some questions about the BTK leg after Turkey. “For example, wheat from Kazakhstan reaches our Mersin port. How will it be trans-shipped to Europe? By road, by sea or railway?”

Regarding claims that the BTK is a challenge to Russia, she said, “Yes, it may help countries such as Georgia and Azerbaijan that do not have warm relations with Russia. They may see this as a way to diminish their dependence on Moscow. Then there is that exaggerated claim that there is an alternative to Russia in the China-Europe trade. Russia is a key country in massive trade while also being an important market itself."

Saglam added, "Some claim that US-European sanctions against Russia bring restrictions on transport of Russian agricultural produce, thereby making the BTK the alternative route. But this is a premature analysis. For one thing, nobody knows how long these sanctions will remain in force. It is also important to know how much cheese China buys from France and how many apples from Poland. China may not be willing to bypass Russia, which is a strategic actor for Beijing. Finally, you should not overlook the national railroad capacities of the countries on the BTK route.”

The BTK railway no doubt will contribute to Turkey's commerce with the southern Caucasus region and central Asia. However, China can be expected to use the BTK not to reach Europe's markets, but Turkey's.