Turkey is isolated not just by its neighbors but also by nations further afield. 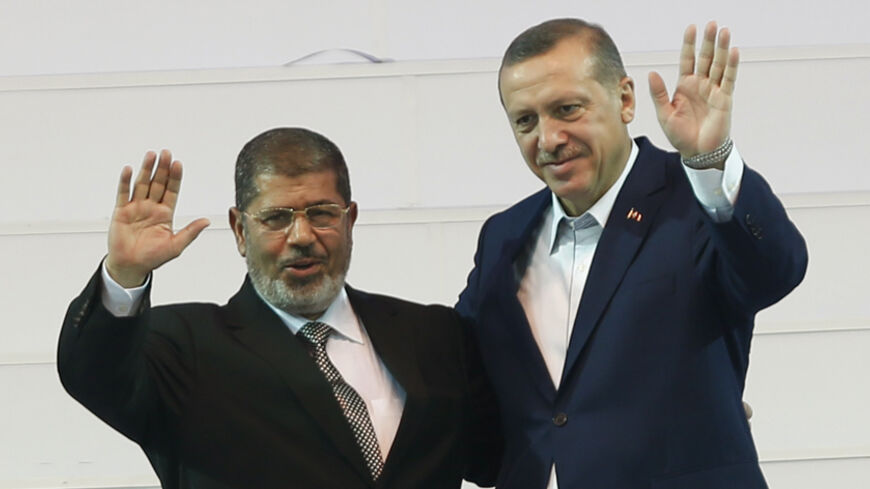 On Dec. 24, 2009, Turkish and Syrian ministers held a joint Cabinet meeting at the presidential palace in Damascus. Syrian President Bashar al-Assad shook hands with everyone present before Turkish Prime Minister Recep Tayyip Erdogan and his Syrian counterpart, Mohammed Naji al-Otari, sat down at the table to ink agreements. After they signed 13 accords, their ministers followed suit. No fewer than 51 agreements were signed in a single day. Erdogan warmly addressed his “brother Assad” and declared that Turkey and Syria had ushered into a “new era.”

The Arab Spring brought similar scenes of friendship with Egypt, Tunisia and Libya.

The wave that rose with Tunisia’s Jasmine Revolution whispered to Erdogan and his then-Foreign Minister Ahmet Davutoglu that “the time is just right” for their covert neo-Ottoman agenda. In February 2011, Davutoglu flew to Tunis and huddled with Rached Ghannouchi, head of the Islamist Ennahda movement, at the Turkish Embassy. The Tunisian version of the Justice and Development Party (AKP) was ready to go.

Soon, Libya’s interim leader Mustafa Abdul Jalil was given a red carpet welcome in Ankara. The Turkish government allocated $300 million in aid to Libya, flying part of it to Tripoli in cash stashed in suitcases. Libya’s AKP was ready to go as well.

The Egyptian leader returned to Cairo with a pledge of $2 billion in Turkish financial assistance. Erdogan was eager to help his “brother Morsi” overcome Egypt’s economic bottleneck. Egypt’s AKP was also ready to go.

With “brother Meshaal,” Erdogan agreed to have his next meeting in the Gaza Strip. And with Barzani, a deal was struck to carry oil from northern Iraq to world markets via Turkey and build a new pipeline bypassing Baghdad.

Stepping up the drive to reclaim former realms, the new Ottomans believed their imaginary target was within reach. The plan to attain “regional” and then “global” leadership seemed to be coming to fruition. But when the Arab Spring’s breeze reached Syria, the calculations turned upside down.

In Ottoman power struggles, royal fratricide was permissible. The new Ottomans, too, had to do what it takes, even if it meant the head of “brother Assad.” To get the job done, the Free Syrian Army was given bases, weapons, ammunition and money. Al-Qaeda, Jabhat al-Nusra and the Islamic State (IS) also received favors under the principle of “the enemy of my enemy is my friend.”

Three years on, Turkey faces a hefty political and economic bill, under which the neo-Ottoman dream lies in smithereens.

The United States is back in action with a new coalition. It has shoved the Erdogan-Davutoglu pair aside, having seen that they are incapable of the regional mission they were assigned to.

The ill-conceived drive to build a new Ottoman realm and lift up the Middle East has taken a heavy toll on the Turkish economy that keeps swelling by the day.

The 51 agreements with Syria are shelved. With trade routes blocked because of the war, the Syrian market, where Turkish exports reached $8 billion in 2010 during the “fraternity era,” is lost. Exports to 16 other Middle East and Gulf countries via Syria have ground to a halt.

Turkish cargo trucks, which form the largest fleet in Europe, used to make 105,000-700,000 runs via Syria and Iraq annually, according to Turkey’s International Transporters’ Association. Many of them now lie idle in border provinces' parking lots.

Regional conflict and rising terrorist groups have driven 2 million refugees to Turkey. The border provinces, which in 2010 welcomed more than 2.3 million Syrian tourists, are now swamped with homeless, jobless and destitute Syrians.

In a further setback, Cairo announced in late October that a transport agreement with Turkey signed under Morsi had been terminated. Under the deal, a Ro-Ro Line route (roll-on, roll-off) was set up across the Mediterranean from Turkey to Egypt as an alternative way for Turkish trucks to ship goods to Gulf and other Middle East countries and North Africa. Now this export route is closed as well. Ankara’s support for the ousted Muslim Brotherhood and swipes at President Abdel Fattah al-Sisi’s administration led Egypt to also cancel an arrangement under which Turkish businesspeople were issued quick visas at the airport.

Ankara’s support for Hamas alienated Fatah, on top of already hostile ties with Israel, sidelining Turkey from peace efforts in the region. Erdogan is yet to go to Gaza, two years after he said he would.

In Iraq, the AKP government engaged with the Sunnis against the Shiite government and offered refuge to fugitive politician Tariq al-Hashimi. The soured relations led Baghdad to cancel the Turkish Petroleum Corporation’s oil field licenses. Turkish contractors were sidelined from public tenders worth billions of dollars and the construction market in Iraq.

In 2013, Iraq was the top destination for Turkish exports, which were worth $13 billion. As of October, Iraq is down to fifth place on the list. The KRG accounted for 60% of Turkey’s trade with Iraq. IS’ capture of Mosul in June blocked also trade routes running via Iraq to the south. The head of the Turkish Exporters’ Assembly, Mehmet Buyukeksi, said Nov. 1 that exports to Iraq dropped 49% in July and were down by $800 million in the first 10 months of 2014.

In Libya, which used to be a top market for Turkish construction companies, Turkey is similarly sidelined. Not only have Turkish contractors suffered losses in the $26 billion projects they were working on, but local forces that see Turkey as a supporter of radical Islam have urged Turkish nationals to leave Libya.

Turkey’s $5 billion in trade with Algeria and more than $1 billion in trade with Morocco have also been hit. In Tunisia, Turkish businessmen close to the AKP had invested $744 million after the Ennahda movement came to power. Following the recent election victory of the secular Nidaa Tunis, they must be having some gloomy thoughts as well.

Last month, Turkey suffered a crushing defeat at the United Nations in its bid for a nonpermanent Security Council seat. Spain comfortably won the vote, for Turkey has managed to antagonize so many countries — the Shiite Iran-Iraq-Syria bloc with its pro-Sunni policies; Egypt, Saudi Arabia, the United Arab Emirates and Jordan with its support for the Muslim Brotherhood; and European countries with its alleged backing for IS and free passage to European jihadists.

The outcome of the vote shows that Turkey is being isolated not only in the region but by the entire international community.