From 'zero problems' to zero trade

Ankara’s support of the Islamist-controlled National General Congress instead of the government in Tobruk has had dire consequences for Turkish business interests in Libya. 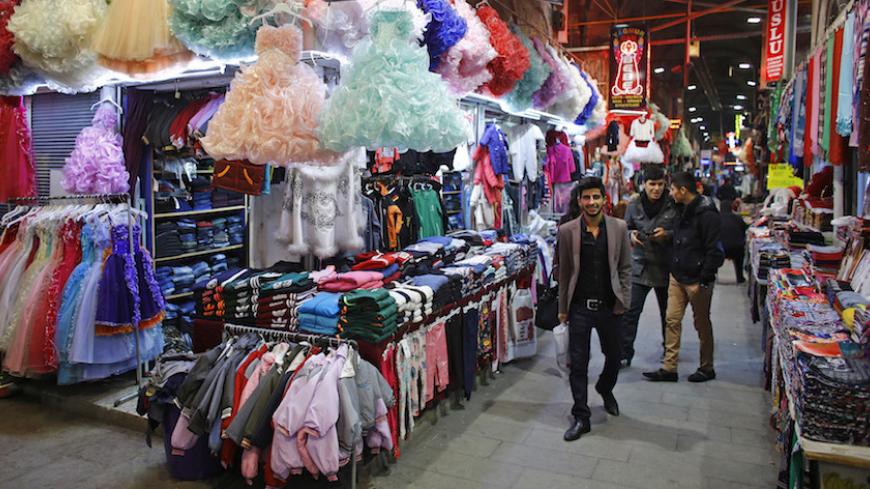 People walk past shops at a bazaar in the central Anatolian city of Kayseri, Feb. 13, 2015. - REUTERS/Umit Bektas

Turkey’s becoming party to internal conflicts in the Middle East and North Africa is now affecting its business connections, in addition to its political relations. While Egypt was saying that it will stop Turkish roll on-roll off ("Ro-Ro") ferry trips, another serious blow came from Libya. The Tobruk-based government of Prime Minister Abdullah al-Thinni accused Turkey of arming Islamists and decided to expel Turkish companies from Libya.

Turkish companies in Libya are owed $4.5 billion and construction equipment worth $7 billion. During the civil war, $1.2 billion worth of machinery was looted from Turkish work sites. What will happen to the debt and the rest of the equipment is not yet clear.

Turkey is supporting the legitimacy of the National General Congress (NGC) controlled by Islamists and government of Omar al-Hasi against the Tobruk-based government that was appointed by the Representatives Assembly elected in June 2014, making Turkish entities unwanted in parts of Libya. The Hasi government is working under the NGC, which was tasked with managing the constitutional process but has not transferred authority to the new parliament.

Turkey, citing the decision of the Libyan Constitutional Court that annulled the election, says the government in Tripoli still maintains its legitimacy. While the United Arab Emirates, Saudi Arabia and Egypt adopted pro-Tobruk positions, Turkey has hardened its pro-Tripoli stance.

Following the execution of 21 Egyptian Copts by the Islamic State (IS) and Egypt’s reprisals, the Tobruk front further toughened its anti-Turkey position and in an extraordinary Feb. 22 meeting in Bayda, decided to expel Turkish companies from Libya.

Immediately after the decision was announced, in a statement to daily Asharq al-Awsat, Thinni accused Turkey of supporting terrorists in Libya and said, “Turkey’s position is wrong. We have to take countermeasures. At the end of the day, Turkey will lose.” The Turkish Foreign Ministry responded by warning that unless Libyan officials change their attitudes, Turkey will take "necessary measures."

Omar Hussein Bagyu, spokesman for the Tripoli government, which has good relations with Ankara, told Turkey’s official Anatolian Agency that the decision of the Tobruk administration applies only to the areas it controls. Ersin Takla, chairman of Turkey-Libya Business Council, is not as optimistic as the Tripoli government. He said, “If you recognize the Tobruk government as the official government of Libya as the UN does, then we have to assume that decision applies to all of Libya. In such a situation, our account with Libya will be settled.”

The Thinni government controls Tobruk, Bayda and Ecdebiye in eastern Libya and Zintan and Zawiye in the west. Tripoli and Misrata are under the control of militiamen of Libyan Dawn, which supports Hasi. In Benghazi, Ansar al-Sharia is dominant, and in Derme and parts of Sirte, IS. Many Turkish companies have suspended their operations in many places because of the clashes.

Turkish businessmen are in tense waiting mode. Chairman of the Ankara Chamber of Industry Nurettin Ozdebir expressed their anxiety, saying, “Our businessmen who cannot collect the money owed to them now risk losing their machinery assets. We hope the government will find a solution."

There is at the moment no hope that the government can reverse the crisis. Ankara’s only hope is for the UN to conclude its reconciliation efforts as soon as possible. A government source speaking to Al-Monitor on condition of anonymity attributed this drastic decision to expel Turkish companies to pressures exerted by Egypt, saying, “After the massacre of 21 Copts, Tobruk has been under stronger Egyptian influence. In fact, the chairman of the Representatives Assembly, Akile Salih, is uneasy with this decision by Thinni. We have been unofficially informed of that sentiment. We as Turkey want the problem between the Tobruk and Tripoli governments to be solved through negotiations. But Thinni refused to attend the meeting planned in Morocco as part of the UN mediation. This is attributed to the increasing influence of Egypt.”

According to this source, Salih was invited to Ankara last month to discuss a peaceful solution and the return of Turkish companies to Libya. He was to meet President Recep Tayyip Erdogan and Prime Minister Ahmet Davutoglu on Jan. 14. But Salih, who kept some meetings in Istanbul, did not go to his appointments in Ankara. Three times earlier on, Salih had sent special envoys to Ankara to ask for the Turkish businessmen to be allowed to return to Libya. The government source said it was Egypt that persuaded Salih not to go to Ankara, saying, “We offered two alternative dates — on Jan. 19 and 26 — to the Tobruk side instead of the Jan. 14 meeting that wasn’t held. They still didn’t come. But the chairman of the [Tripoli] National General Congress, Nuri Abu Sehmein, accepted our invitation and came on Jan. 16 for meetings.”

The same source, discussing the effects of the expulsion of Turkish companies, said, "We should not overstate the significance of the declaration of the Tobruk side. This government rules Tobruk, Bayda and Merc with a total population of not even 300,000. Therefore, it is a decision that applies to companies working in those three cities. For example, a Turkish company called 77 Insaat is continuing with road construction at Kufra. But upon the request of the Tobruk government, we withdrew the Karadeniz mobile electricity power ship.”

According to the Turkish Contractors Union, since 1973, Turkish contractors in Libya have completed more than 565 projects with a total value of $29 billion. In 2011, the Turkish government had first rejected foreign intervention against leader Moammar Gadhafi because of Turkish business contracts and money owed to them. Erdogan — who had initially asked “ What does NATO have to do in Libya?" — eventually agreed to establish the main headquarters for NATO's intervention in Izmir and carried out sustained negotiations with the transition government for the money owed to Turkish contractors. Some of the 200 Turkish companies operating in Libya have engaged international arbitration but still have not collected the money owed to them.

The crisis faced by Turkish businesses is not limited to Libya. Turkey’s export sector, which has been coming up with alternative routes after losing its Syrian routes, is now gearing up to pay the cost of the crisis with Egypt because of Turkey’s non-recognition of President Abdel Fattah al-Sisi. Egypt has said it will not renew the agreement covering Ro-Ro ferryboat trips when it expires on April 20. Following the loss of transit routes through Syria, Turkish exporters shifted their routes to Saudi Arabia and other Gulf countries by organizing Ro-Ro ferries between Iskendurun and Port Said. This route was regulated by agreements signed between Turkey-Egypt and Egypt-Saudi Arabia in 2012. If a new agreement cannot be reached with Egypt, Turkish exporters will suffer heavily.

Serafettin Asut, chairman of the Mersin Chamber of Commerce and Industry, said, “We have two alternatives. Either we will persuade Egypt or send ships carrying our goods through the Suez Canal. This, of course, means higher costs.” Problems with Libya and Egypt will increase the pressure on the Turkish economy, which is already sending warning signals. But Erdogan’s uncompromising attitude is limiting the maneuvering room of the Turkish government, even if it's willing to be flexible.