A revived Souq al-Hal market in Syria's Aleppo seems to indicate some stability has returned to the area. 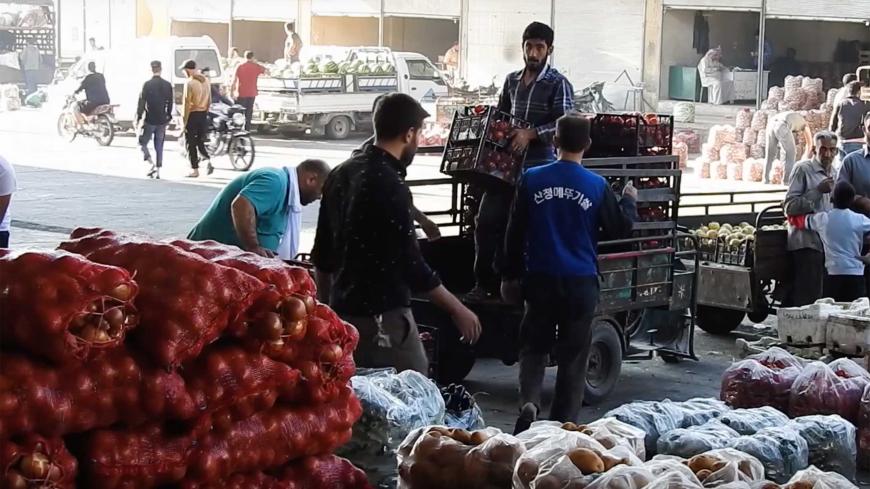 ALEPPO, Syria — Trade has been flourishing at Souq al-Hal, one of the most important markets in the opposition-held areas of northern Syria. At this market in al-Bab, in Aleppo province, crops and produce are imported and exported. Some even go to regime-held areas.

Crops produced in Syrian opposition areas and in Turkey are sold at the market, and many go to regime-held areas in Aleppo, Homs, Hama and Damascus. Crops also go from Souq al-Hal to areas under the control of the Syrian Democratic Forces (SDF) in Manbij and northeastern Syria. Souq al-Hal provides jobs for hundreds of people in the Turkish-occupied Euphrates Shield area and has revived trade there.

The market has come a long way since the Islamic State (IS) took control of al-Bab in 2014.

“The Islamic State started building the new Souq al-Hal in 2015 to replace the smaller old Souq al-Hal located in the city center, and construction was completed in 2016. IS sought to make the new souq an important commercial center to market crops in the areas under its control in the Aleppo countryside at the time, reaching eastern Syria and Iraq," Mahmoud Sultan, a grocer working in Souq al-Hal, told Al-Monitor.

“However, IS could not run the new market [for long] because the Free Syrian Army [FSA], backed by the Turkish army, launched a battle against the organization and expelled it in February 2017.”

The al-Bab local council seized public property in the area that April, including shops and markets such as the new Souq al-Hal. The council renovated these properties, which had been badly damaged by shelling and battles between the FSA and IS.

Since then, stability has been restored and people have been returning to the area.

“By early 2018, all 285 shops in Souq al-Hal were being used to sell crops," Ibrahim al-Obeid, head of the Souq al-Hal Traders’ Union, told Al-Monitor recently. "Sales and purchases are booming and several products are sold to different Syrian cities. Traders also import fruits and vegetables from Turkey, such as grapes, potatoes, oranges, tomatoes and other products not available in the Aleppo countryside.”

Abdul Khalek Mohammad, who trades fruit in Souq al-Hal, told Al-Monitor, “I rent the shop from the local council in al-Bab city. I pay 600,000 Syrian pounds ($1,164) annually. The local council owns all the shops in the market, and traders have to pay a sum of money as yearly rent.”

He said, “Activity in Souq al-Hal is good. I import some kinds of fruit from Turkey, and I sell them to different areas. There are traders from Homs, Hama and Aleppo asking us to send shipments of vegetables and fruits. Daily shipments go to regime areas through al-Ais crossing in southern Aleppo, which separates FSA and regime areas. We also send shipments to SDF-held areas in Manbij, Raqqa and Hasakah, and trucks loaded with vegetables and fruit pass through the Umm Jalloud crossing” in northeast Aleppo.

Still, farmers and traders in Souq al-Hal face difficulties due to the checkpoints between opposition-held areas and cities controlled by the regime and the SDF, where taxes are imposed on goods.

Mohammad added, “Our trade faces many challenges. The regime forces controlling al-Ais crossing impose high taxes on loaded trucks to allow them to enter the regime areas. The tax is sometimes twice the price of the items loaded on the truck, which leads to a rise in the prices of vegetables and fruit for consumers.”

He said that a kilogram (2.2 pounds) of tomatoes costs around 100 Syrian pounds (19 cents), but that traders must pay a tax of 50 Syrian pounds when entering the regime’s crossing.

“The same applies for Umm Jalloud crossing, where the SDF imposes taxes on loaded trucks and forces traders to unload their cargo for inspection. Many crops are damaged as a result, and the price of what is left rises due to the high transportation cost and taxes,” Mohammad said.

Souq al-Hal also faces competition from Turkey. Sohail Abbas, a farmer from Aleppo province who markets his products in Souq al-Hal, told Al-Monitor, “The crops entering our region from Turkey have affected the prices. I grow potatoes and market them in Souq al-Hal, but I don’t get a good price. ... We have trouble marketing our local crops because Turkish products compete with them.”

Tomatoes, potatoes, grapes and apples from Turkey are 10% cheaper than local ones, as Syrian production costs are higher than Turkey's because the Turkish government gives subsidies to its farmers.