Civilians and traders in northern Syria hope commercial activities will resume there now that the Abu al-Zandeen crossing is open, linking regime-controlled territory to Turkish-backed opposition areas for the first time. 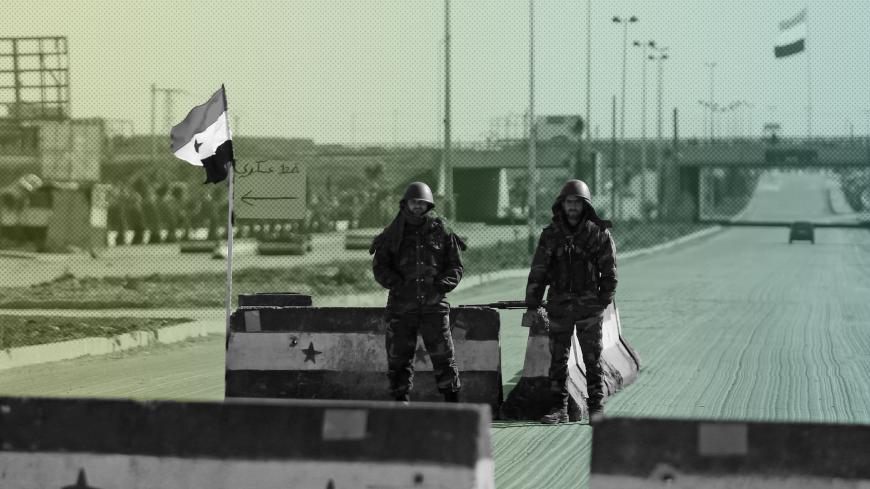 The regime has controlled all of Aleppo city since December 2016, while the Turkish-backed Syrian National Army (SNA) controls al-Bab.

This highway linked Aleppo city to the province's northeast, but it had been blocked since July 2014 when the surrounding area became a frontline between the opposition and the regime — especially after the latter took control in July 2014 of the industrial city of Sheikh Najjar.

On March 18, both the regime and the SNA agreed to open the commercial and civilian crossing — dubbed Abu al-Zandeen — on the Aleppo-al-Bab highway. Details of the agreement have yet to be made public.

This is the first crossing that links regime-controlled areas with those held by the SNA, allowing access to land ports of entry with Turkey.

On March 23, Al-Monitor headed to the crossing, where eight trucks were waiting at the last opposition checkpoint before leaving the crossing. “Time, effort and costs have been [saved] thanks to the opening of the crossing,” a truck driver transporting vegetables told Al-Monitor on condition of anonymity. He said, “We’ve been long waiting for such a step.”

He added, “Delivering cargo from al-Bab to Aleppo used to take around nine hours just to get to al-Eis crossing in the southern countryside of Aleppo, with a distance of up to 200 kilometers [124 miles], packed with opposition and regime checkpoints. Today, with the opening of Abu al-Zandeen crossing, the 50-kilometer journey takes less than 1½ hours.”

Al-Eis in southern Aleppo province was the only outlet for the movement of civilians and goods between the opposition and regime areas. With the opening of Abu al-Zandeen under SNA and regime control, HTS no longer holds the only active crossing.

Maj. Mohammed Ayoub, the SNA leader in charge of overseeing the Abu al-Zandeen crossing from the opposition side, told Al-Monitor, “Opening the crossing was essential to reduce the burden on citizens and traders who have to travel long distances.” He explained that the crossing currently is used for commercial transit only, though civilians will be allowed to cross at a later stage.

“The SNA … manages the crossing completely from the opposition side,” he said. “Fees are imposed on the goods depending on their type, and proceeds are collected by the SNA.”

Not only does the crossing help support the SNA, but it will also draw traffic from al-Eis, thus reducing HTS revenues. Turkey, the United States and other countries consider HTS, an offshoot and rival of al-Qaeda, a terrorist organization.

For now, fees at Abu al-Zandeen crossing vary, but an opposition economic committee will determine set fees later, Ayoub noted. The regime currently doesn't charge transit fees, a truck driver told Al-Monitor on condition of anonymity, noting that he wasn't sure if it will impose any charge in the future.

As for the security situation, both the opposition and the regime check vehicles before they cross, each on their respective side. Ayoub said the economic committee has identified a list of substances that cannot leave the opposition-controlled areas such as fuel, livestock, flour and chemicals used to make explosives and ammunition.

The establishment of the Abu al-Zandeen crossing was announced Jan. 13, 2018, after a decision by the opposition-affiliated Syrian Interim Government. The crossing remained closed for unknown reasons, with overseers claiming it was due to internal disputes among opposition factions. Ayoub didn't offer a clarification in this regard but noted that the crossing now has opened in coordination with the Turkish government.

Traders and citizens say they are pleased with the new crossing, as its opening will revive commercial movement in northern and eastern Aleppo and in the areas controlled by the regime. It provides traders, industrialists and farmers alike with easily accessible markets for their goods.

The crossing will also provide a quick link between Aleppo and Turkey passing through al-Rai crossing, 30 kilometers north of al-Bab. This route will be an alternative to the Gaziantep-Aleppo highway, which has been closed since 2012, being a contact area between the opposition and the regime. Work is underway to reopen the highway.

“The opening of the crossing will have a positive impact on traders and citizens alike, as the cost of shipping will be reduced, which will decrease the price of goods,” Mohammed al-Sheikh, a food trader in al-Bab, told Al-Monitor. “There will be greater freedom of movement of goods and greater competition between traders and industrialists."

Sheikh added, “Food and fuel products in regime-held areas are cheaper than in opposition-controlled ones, and the regime will now benefit from Turkish products and will be able to export its goods abroad.”