Can Syrian opposition defend both Hama and Aleppo at the same time?

The Syrian opposition is stretching itself thin as it strives to protect Aleppo while also securing its progress toward Hama, where regime forces pose a serious threat. 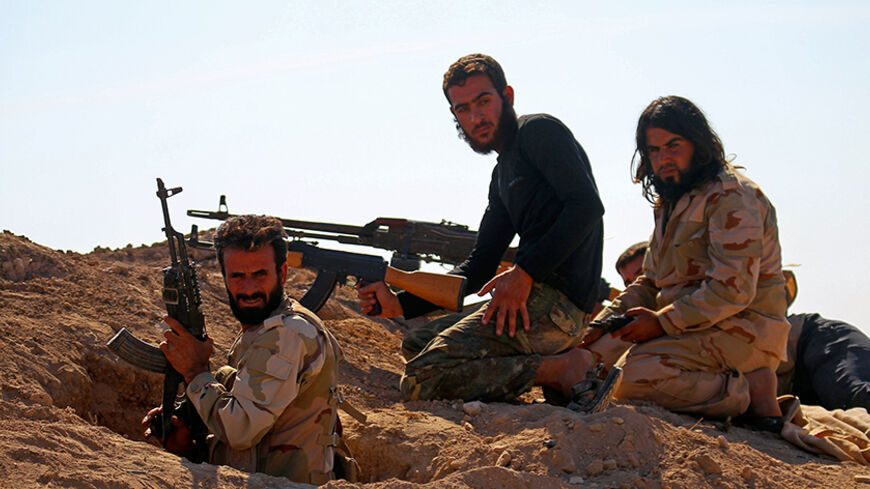 Rebel fighters hold their weapons as they take their positions near the town of Kafr Nabuda in Hama province, Syria, Oct. 11, 2015. The Syrian army, backed by allied militias, has made advances in western Syria after heavy Russian airstrikes. - REUTERS/Ammar Abdullah

ALEPPO, Syria — Opposition fighters have made progress in their critical quest to reach the central Syrian city of Hama, but now are being weakened by their efforts to defend Aleppo at the same time.

Hama is controlled by regime forces and their allies, who hope to use that position to access the towns of Kafriya and al-Fuah in Idlib’s countryside. Should that happen, the regime would penetrate the heart of opposition-controlled areas in northern Syria.

On their way south to Hama, opposition forces are reclaiming towns and hills that regime forces controlled for a long time. The most significant progress came Nov. 5, when it took over the city of Murak, which the regime had controlled since late October 2014. Also on Nov. 5, opposition factions declared control over the base of Tell Othman and al-Shanabra checkpoint, west of Kafr Nabuda. On Nov. 6, the opposition took over Qubaybat, Tell al-Tawil, Tal Skik, Atshan and Umm al-Haratein, which it had lost during the regime’s Oct. 10 attack under Russian air cover.

Despite Russian air support for the regime, the opposition took control over an estimated 40 square miles in the Hama governorate in just the first week of November. Yet, it seems opposition forces will have difficulty reaching Hama. Murak, their closest stronghold to Hama, is still 15 difficult miles away.

Hama, in central Syria, would provide a link from the capital Damascus, in the south, to northern Syria. Hama is also Syria's fourth-largest city in terms of population, where about 750,000 people live (according to 2010 statistics). The opposition sees an opportunity to gain the people's trust in Hama, where in 2011, hundreds of thousands of citizens protested against the regime. However, the city remained under the regime's control and has not seen any armed action, unlike cities in northern Syria.

Despite all their progress in Hama governorate, opposition forces are falling behind in the countryside south of Aleppo as regime forces advance, backed on the ground by Lebanese Hezbollah and Iran. This is why the opposition was forced to withdraw troops from the battle for Hama and send them to defend Aleppo. On Nov. 14, Jaish al-Nasar, one of the most prominent forces affiliated with the Free Syrian Army in Hama, declared a full public mobilization to defend Aleppo.

A similar step was taken Nov. 15 by Jaish al-Fatah, the Army of Conquest, which includes several opposition factions such as Ahrar al-Sham, Sham Legion and Jabhat al-Nusra. “These reinforcements will repel the regime forces and their allies’ progress and push them back,” Ahmed al-Ahmad, the public relations officer for Sham Legion, told Al-Monitor on Nov. 15.

The regime forces had taken control of a number of important towns in Aleppo’s southern countryside in an offensive launched Oct. 16. They continued to progress until Nov. 13, when they gained control over the towns of al-Hadir and al-Eis, and the strategic al-Eis hill, which overlooks parts of the Aleppo-Damascus international road and is within firing distance of large areas of Aleppo’s southern countryside.

In this regard, Ahmad noted, “The regime forces’ progress in Aleppo’s southern countryside was due to the great Iranian role in leading the battle along with the wide participation of Shiite militias, such as the Lebanese Hezbollah and the Iraqi Nujaba movement.”

He added, “The opposition neglected Aleppo’s southern countryside and coordination is weak between the opposition battalions. This is how the regime was able to progress on this fragile point."

There's little doubt that, by sending reinforcements to Aleppo’s southern countryside, the opposition is weakening its position in Hama, but Ahmad asserted, “There are still enough fighters and munitions in Hama to repel the regime.”