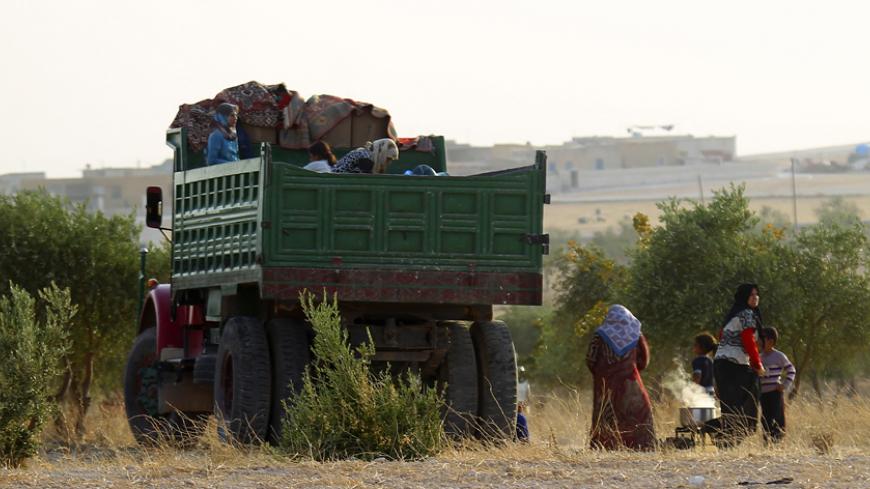 Syrians who fled recent fighting in Aleppo cook near a truck in the south of Aleppo province, Syria, Oct. 19, 2015. - REUTERS/Ammar Abdullah

Syrian opposition on defense in Aleppo

Mohammed al-Khatieb reports from Aleppo that despite advances in Hama governorate, Syrian “opposition forces are falling behind in the countryside south of Aleppo as regime forces advance, backed on the ground by Lebanese Hezbollah and Iran. This is why the opposition was forced to withdraw troops from the battle for Hama and send them to defend Aleppo.”

On Nov. 10, the Syrian military, which is also supported by Russian air power, regained control of Kuweires air base, and three days later took the towns of al-Hadir and al-Eis in Aleppo’s southern countryside. Al-Eis hill “overlooks parts of the Aleppo-Damascus international road and is within firing distance of large areas of Aleppo’s southern countryside,” Khatieb writes.

The Kuweires air base, Jean Aziz reports, “is one of the largest airports in Syria and includes an air academy. It is 25 miles east of Aleppo and is surrounded by a natural water canal on three sides. Controlling Kuweires is an important step toward controlling three villages to the east: Manbij, al-Bab and Jarabulus, [Wassim] Bazzi said. …Those towns are important to IS [Islamic State] because they are along the Turkish border,” and have been a hub for terrorist passage to Raqqa.

Mona Alami reports on a relatively new Islamist group, Jaish al-Sham, which is active in Idlib, Aleppo and Hama, and which “is hoping to be endorsed by the Turkish Military Operation center.”

Alami writes, “The creation of Jaish al-Sham might be indicative of widening ideological fissures inside Ahrar al-Sham and other Salafi movements. This year was marked by an ongoing rivalry between two competing currents within Ahrar al-Sham, namely between the “more moderate” movement of Labib al-Nahhas, the head of foreign political relations at Ahrar al-Sham, and the more conservative views of the military branch represented by Mohammed Abu Sadek, which is believed to be closer to Jabhat al-Nusra.”

This column wrote last week on the fluidity of hard-line Islamist groups in Syria, including the influence of Jabhat al-Nusra, which has been designated by the United Nations as a terrorist organization and therefore excluded from the Syrian political process.

Bruce Riedel observes that the Arab component of the global coalition against the Islamic State is barely registering, just as the United States, France and Russia are considering an even more intense and coordinated military campaign.

Riedel recounts the declining roles of the key Arab members of the coalition in Syria that have instead shifted their priority to the war in Yemen.

This should frustrate those who want America’s Arab partners to take the lead against IS. Syrian President Bashar al-Assad, who has often been accused of holding back against the terrorist group, is now the leading “Arab” force in the fight, backed by Iran, Russia and Hezbollah, in addition to a few US-backed opposition groups, which are as or more preoccupied with fighting Assad as defeating IS.

The good news is that Saudi Arabia and the other key Arab countries have signed onto the Vienna declaration that calls for the “defeat” of IS “and other terrorist groups.” But for Arab countries to assume any leadership role in the coalition, they will have to step up in the military campaign. Riad Kahwaji, writing from Dubai, calls for an “alliance of moderate Sunni forces to lead a ground offensive to uproot IS.”

Riedel concludes, “The absence of Arab air forces creates a political — not military — void, even though Russia, France and America are fully capable of waging an air war against IS. The coalition is missing the Muslim answer to the self-proclaimed ‘Caliph Ibrahim.’”

Turkey, US differences on Syria at G-20

Cengiz Candar reports that the G-20 summit held on Nov. 15 in Antalya highlighted the differences between Turkish President Recep Tayyip Erdogan and other world leaders on the war against IS.

“While the G-20 leaders focused their attention on IS, Erdogan's list of targets included Syrian Kurdish organizations fighting against IS, such as the Democratic Union Party and the People's Protection Units, and the Kurdistan Workers Party (PKK) and the Revolutionary People's Liberation Party-Front in Turkey. The PKK recently took part in liberating Sinjar in Iraq from IS,” Candar writes.

Meanwhile, US President Barack Obama, in remarks to the press at the summit, specifically referred to “strengthening Syrian and Iraqi forces and Kurdish forces that are prepared to fight them [IS],” and explained why he has no interest in backing a no-fly or safe zone in Syria, which has been a priority for Erdogan.

“A true safe zone requires us to set up ground operations. And the bulk of the deaths that have occurred in Syria, for example, have come about not because of regime bombing, but because of on-the-ground casualties. Who would come in, who could come out of that safe zone; how would it work; would it become a magnet for further terrorist attacks; and how many personnel would be required, and how would it end — there’s a whole set of questions that have to be answered there,” Obama said.

Ben Caspit reports this week that some in Israel’s national security establishment may be rethinking the country’s approach to the Iran-led "Shiite axis" following the Joint Comprehensive Plan of Action signed by world powers and Iran in July, and the terrorist bombings in Paris on Nov. 13.

“When all of this is taken into consideration,” Caspit writes, “the Shiite axis, based in Iran and including Damascus and Beirut, has for quite a while now not represented the problem, but the solution. Israel is well aware that the Europeans and Americans have long reached this conclusion. The nuclear deal with Iran confirmed that it is a major power. According to political sources in Israel, the deal effectively gave Iran a 'license to kill.' Recent events create a situation in which this license actually offers a glimmer of hope to the free world. As of now, at least, the only ground forces fighting IS are made up of the Shiite axis: Iran, Hezbollah and what is left of the Syrian army, in collaboration with the Kurds.”

Caspit adds, “The official position sides with the Sunnis, at least for now. Israel has been maintaining clandestine and intelligence collaborations with the pragmatic Sunni states, headed by Saudi Arabia, the Gulf states, Egypt and Jordan. It has no reason to give up on them. After all, Israel also regards Iran’s domination of the region and the growing strength of the Tehran-Beirut axis as a significant existential threat … [but] IS’ recent outrages, culminating in the striking series of attacks over the last few days (the Russian airliner that was downed over the Sinai Peninsula, the Dahiyeh bombing in Beirut and the Paris attack) dangles a question mark over these assumptions.”