Assassinations and attacks are on the rise in the Syrian city of al-Bab controlled by the Free Syrian Army, and the perpetrators remain unknown. 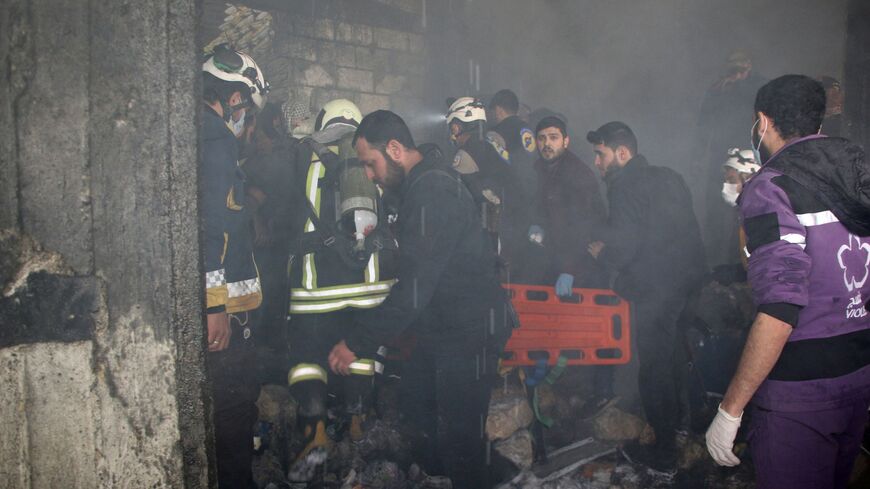 Members of the Syrian Civil Defense (White Helmets) inspect the damage at the site of an explosion in the city of al-Bab in the north of Aleppo province on March 20, 2021. - BAKR ALKASEM/AFP via Getty Images

Organized assassinations are surging in the city of al-Bab in the northeastern countryside of Aleppo, targeting civilians, military, media personnel and members of the police and security forces. The city has witnessed several bombings via booby-trapped cars and motorcycles and improvised explosive devices in recent months.

Al-Bab is controlled by Syrian National Army-branded factions operating under the leadership of the Free Syrian Army (FSA). The FSA, backed by the Turkish army, seized al-Bab from the Islamic State in February 2017.

In recent days, the assassinations of civilians and members of the FSA-affiliated military police surged. On April 15, unidentified assailants killed 1st Lt. Khaled al-Khatib, a member of the military police. He was shot by masked gunmen riding a motorbike as he was traveling from his place of residence in the city of Marea to his workplace at the police station in al-Bab.

Meanwhile, the Syrian Civil Defense, known as the White Helmets, said April 15 that it recovered the body of an unknown man who had been shot on the road to the village of Wakah, west of al-Bab. On the same day, unknown gunmen on a motorbike killed a civilian named Majed Youssef al-Rajab in the center of al-Bab.

On April 14, residents found a body dumped on the side of the road near al-Bab. Investigation found that the body belonged to Jumah Al-Akun, a policeman. On the same day, an explosive device that was fitted to a cargo vehicle in the center of al-Bab exploded, wounding two civilians, with one of them in critical condition.

Ahmed Hassan, a Syrian journalist and researcher specializing in Turkish affairs, told Al-Monitor, “Several influential FSA factions in al-Bab have different alliances, whether with al-Bab’s residents or those displaced from it. This makes it easier for unknown groups to infiltrate these factions and carry out security operations. The secret commercial crossings between the factions on the one hand and the regime forces and the Kurdish forces on the other are still active. These could also be facilitating the bombings amid poor coordination between the security forces operating in the region and in light of the frequent disagreements between the factions and the police. Another possibility is that these attacks are carried by active sleeper cells. Many parties could be behind these attacks, whether as perpetrators, facilitators or collaborators.”

He added, “The failure to control security in al-Bab is due to several reasons, including poor capabilities, lack of coordination among the factions and regional affiliations and mobilization. Moreover, commercial interests represented by the crossings are given prevalence over security interests. Add to this, there is no unified security apparatus and coordination with the international security services, namely from Turkey, is poor.”

Hassan continued, “Factions are often in disagreement. Also, they seem to place their interests above all security considerations, in the presence of corrupt and infiltrated groups and in the absence of a transparent monitoring and accountability mechanism.”

Turkey cannot manage the security situation inside Syria through Turkish institutions, he noted. “There is no constitutional mechanism that justifies [Turkey’s] expenditures to the Turkish government and it needs a different mandate from parliament to authorize military intervention. Turkey is also unwilling to antagonize the factions by undermining their role at the current stage.”

Hassan said the security chaos and neglect in al-Bab threaten Turkey's reputation in the region. “Should the security situation in the north of Syria be handed over to the Turkish Interior Ministry, as is now being discussed, it would improve in the coming period.”

FSA leader Khaled Kutayni, who moves between Turkey and northern Syria, told Al-Monitor, “The problem is the lack of a security mechanism, the absence of plans and the shortage of security and police personnel. We need an unwavering political will and a firm military position by an honest national body that takes appropriate decisions to control security. Painful, deterrent and severe measures need to be taken against those responsible for the crimes, kidnappings, transgressions and security breaches. If the citizens do not feel safe and secure and if the rule of law and public order are not enforced, neither the government nor the authority can achieve the simplest duties it committed to at all levels.”

He said the solution to the security chaos requires sending all units and groups operating for FSA factions outside the city back to their own camps and barracks. “Their abundance and their overlapping tasks are major obstacles to creating the appropriate conditions for controlling the area. Therefore, the executive forces must be merged with the security services as part of a reform process.”

A media figure from Al-Bab city, who spoke on condition of anonymity for security reasons, told Al-Monitor that the attacks could be a settling of scores between the armed factions. He said some Kurdish organizations within or outside the Syrian Democratic Forces, such as the Kurdistan Workers Party, have an interest in destabilizing the areas that they lost to the Syrian National Army. “Also, organized crime groups could be getting paid to handle these attacks,” he said.