The Turkish-backed Free Syrian Army is cracking down on the Islamic State cells, amid an uptick in suicide attacks in north Syria. 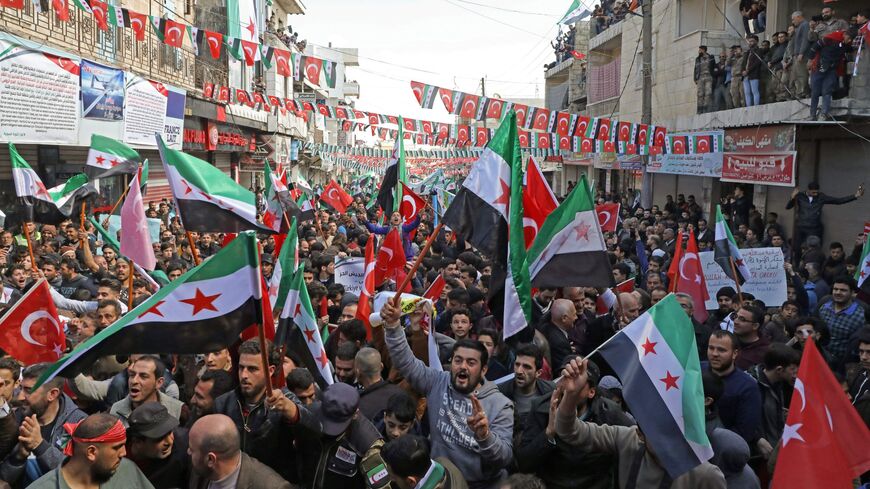 Syrians wave flags of Turkey and the Syrian opposition during a demonstration in Azaz city, north of Aleppo, on Feb. 2, 2020, in support of Turkey's military offensive in northwestern Syria. - NAYEF AL-ABOUD/AFP via Getty Images

ALEPPO, Syria — The Turkish-backed Syrian opposition has waged a security campaign against Islamic State (IS) cells in Azaz in the northern Aleppo countryside since Jan. 20, leading to the arrest of dozens of IS members and collaborators. The hunt for other members is expected to continue through the confessions of their fellows.

The Azaz media office said in a statement posted on its Facebook page on Jan. 19, “The military police in the city of Azaz launched a large-scale security operation during which a number of IS cells operating in the area were arrested, following clashes between the two sides. The operation comes in response to blasts and booby-trapped explosions carried out by these cells, which killed a military police commander and a civilian, and injured a Free Syrian Army (FSA) fighter in two separate operations.”

An FSA military police official, who declined to be named, told Al-Monitor, “The city of Azaz and its suburbs are on high-security alert. Military police are deployed at the city’s entrances and exits, and on the main roads in the vicinity of the city. Intensive searches for IS cells are also ongoing.”

The official would not disclose how many members the military police have arrested in Azaz since the beginning of the campaign.

On Jan. 13, the FSA-controlled areas witnessed three simultaneous explosions that killed and injured a number of people, including civilians, while civilian and military vehicles caught fire. Two people were injured when a car bomb went off in Azaz’s northern neighborhood. Military police dismantled another explosive device near al-Jundi mosque in the city center.

The second explosion occurred in front of the main garage in the city center of al-Bab in the Aleppo countryside. The suicide bombing killed a civilian and injured a number of others.

The third incident took place at a roundabout in Afrin city center near the headquarters of Jaish al-Islam, an FSA faction. The suicide bombing also killed one person and wounded others.

The official said, “The blasts that took place simultaneously on Jan. 13 lead us to believe that a single party stands behind them, particularly since they consist of suicide bombings, a method usually adopted by IS cells, not by those affiliated with the Syrian regime or the SDF.”

He added, “It seems that IS cells, through the bombings, wanted to say that they are still present and have the ability to carry out operations in the most sensitive parts of the large cities in the FSA-held areas. The number of bombings during the last quarter of 2021 had decreased, thanks to the successive security campaigns by the FSA military police in the area.”

The official noted that “the popular fear of insecurity and chaos pushed us to launch an organized campaign to cleanse the area from IS cells," particularly after Jan. 20, when IS militants launched an attack against the Sinaa prison. Dozens of people, including IS militants and SDF fighters were killed in the clashes that erupted and lasted for a week before the SDF managed to regain full control of the prison on Jan. 26.

Meanwhile, it seems explosions are back in the opposition areas after a relative calm at the end of 2021 during the Turkish-backed security campaign led by the FSA military police against IS cells. One of the largest operations was carried out in Aleppo’s countryside in September 2021, leading to the arrest of a large number of IS militants.

Muhammad al-Sukari, a researcher in Syrian affairs based in Gaziantep, told Al-Monitor, “The FSA is trying to send political messages to international and regional parties"  that they can handle IS "in a more professional and efficient way than the SDF," and consequently that they might regain support from the United States.

Sukari added, “The FSA wants to learn from its previous mistakes when it dealt with the Syrian file based on its own priorities, instead of taking into account international considerations. … Therefore, one can say that the goal is to gain credit in the eyes of Washington and major powers, hoping for a return of support. Nevertheless, the armed opposition’s internal differences may constitute a major obstacle.”