In Syria, Diyanet assumed a role beyond religious diplomacy in coordinating various aid, vocational and religious education agencies, all to win the hearts and minds of the locals. 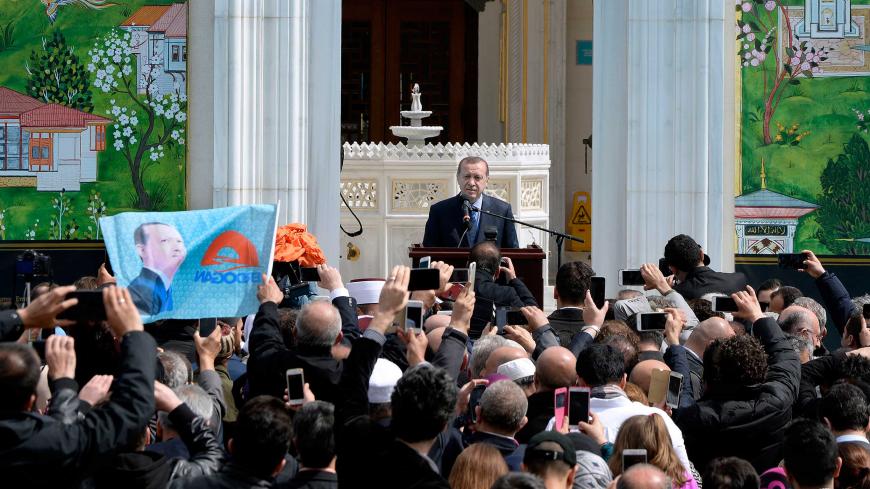 On Sept. 13, Turkey’s state-run Religious Affairs Directorate (Diyanet) published a 104-page document, “Syria Euphrates Shield and Olive Branch Activity Report.” The publication didn't prompt much discussion, except for a few headlines focusing on mosque repairs in war-torn Syria. The Diyanet has indeed played multiple roles both on Syrian soil and with Syrian refugees in Turkey. Since Ankara's military incursions into Syria began in August 2016, the Diyanet has gradually become the pivotal institution that Ankara leans on for post-conflict stabilization.

In the last decade, the Diyanet evolved as Erdogan’s signature institution on par with Turkey's National Intelligence Organization (MIT). Its budget, personnel and reach, both domestically and internationally, have grown. The Diyanet’s close links with the MIT are well-known. Indeed, currently Germany’s intelligence agency is considering adding the Diyanet to its official watch list. Its imams in Germany are now reportedly advocating for victory against Kurds in Syria.

Allegations that Diyanet mosques engaged in espionage to gather information on Gulenists in the Netherlands and elsewhere in Europe have created tensions with Ankara. Turkey's ruling Justice and Development Party (AKP) has also altered the role of the Diyanet in places such as Bulgaria, where there are ethnic Turks and Muslims, raising suspicion and anger in host governments.

A retired cleric who worked for the Diyanet more than 20 years and who did not want to be identified told Al-Monitor, “The Diyanet is the best echo chamber for Erdogan, particularly since 2010." The Diyanet’s budget has jumped significantly since then. "Its activities can always be legitimized under the blanket of humanitarian aid and religious freedom. It is the best place to hide any activity in plain sight. As long as there are Muslims, the Diyanet’s involvement can always be justified. Plus, the Diyanet coordinates, and indeed controls, a long list of government-friendly NGOs [nongovernmental organizations], so the figures published for its spending, hiring and other sorts of expenditures can be spread and concealed from any sort of oversight.”

Previous governments in Turkey did not care much for the Diyanet, but Erdogan's administration expanded it without opposition. “Most employees are sympathetic to his cause and the agency’s activities are alien to the secular establishment. Fifteen years ago, no one could envision that the Diyanet would become one of the strongest agencies, with global outreach and immense national political power. Inside the Diyanet, there is no one to disagree and challenge the Erdogan administration’s closely held beliefs. To the contrary, the culture of the agency, as well as the culture it promotes, is based on submission,” the retired cleric concluded.

A theology professor from an Istanbul university who did not want to be identified added: “Consider all that we hear from the EU about the Diyanet’s activities on recruiting agents, covert surveillance and espionage. This is Europe, where imams and other employees of the Diyanet have to be under the supervision of the Turkish consulate or embassy. Just imagine what the same entity can do in a land where there is no established government. That is the unknown we are facing in Syria.”

Indeed, the Diyanet has issued halal certificates since 2011, it established its own TV channel in 2012, and the Turkish Diyanet Foundation (TDV) operates in parallel with the Diyanet, with its own activities and costs.

The 104-page Diyanet report gives us some clues about Erdogan’s long reach in Syria. The report is rather detailed, but also confusing. Despite colorful charts and figures, it prompts several questions.

Trying to understand the Diyanet’s role, Al-Monitor contacted Syrian imams hired and trained by the Diyanet, as well as local residents of the Turkish-controlled cities of al-Bab, Jarablus, Azaz and Mare who have interacted with Diyanet-affiliated entities, as well as experts who have recently visited the area. Given the poor security situation, locals have asked for their names to be kept confidential.

A Syrian imam who has traveled to Turkey several times and has learned some Turkish told Al-Monitor: “We're getting paid by the Turkish government. We're grateful to them and we see that the local population here [mostly Turkmens and Arabs] are happy to be under Turkish rule. For Turkey, religious and national allegiance are one and the same. But our interpretation of Islam may not always be the same. Turkey keeps Kurds under control and that's good for us. Plus, one day Syrians in Turkey may come and settle in these areas.”

Amed Dicle, a seasoned journalist who recently traveled to the territories raised a red flag about education activities of the Diyanet, highlighting that this is a sign that Turkish presence in the region is not temporary. The Diyanet’s report says11,250 students in the area controlled by Turkey are receiving education through the Diyanet. Dicle said the Diyanet has hired “5,686 teachers from Syrian rebels.” He emphasized that the education is centered on a Sunni-Turkish synthesis with a heavy dose of anti-Kurdish teachings. “Kurds are portrayed as atheists, and the PKK, YPG and other Kurdish fighters are infidels.” He said students are grouped according to gender and age.

In the Diyanet’s report it also seems odd that 519 female and 291 male Quran teachers are reported to be employed.

Although the report says the Diyanet funded repairs of 108 mosques, both Dicle and other locals estimate that over 250 mosques and madrassas have been repaired. “They particularly pinpoint places where Ottomans used to have a mosque or a school and focus on that,” said Dicle. “Turks are learning, they are now following the Iranian model,” added a Syrian cleric.

The report concludes $1.6 million was spent in Syria in the last year. It also states 197 million Turkish liras ($32.5 million) in aid was sent to Syria. The report provides clues about the wide spectrum of education provided to Syrian ulama, ranging from computer literacy to courses on “separatist movements in the Islamic world such as IS, al-Qaeda, the Gulen movement and Hezbollah.” The report emphasizes that 1,000 Qurans in the Kurdish language were distributed in Operation Olive Branch areas.

Dicle and other interviewees concurred on two points. One was that the Diyanet’s efforts indicate Turkish willingness to be present in these territories beyond the war, investing in people, particularly women and young people, with the purpose of generating emotional bonds and identification with Turkey. Second was that the border between Syria and Turkey is to be erased to an extent as a result of the high mobility of Syrian refugees between those two countries.

Perhaps the most intriguing graph is saved for the last: Turkey was listed as the No. 1 country in the world in humanitarian aid, followed by the United States, Germany and the UK. That chart should have given Erdogan significant bragging rights for domestic consumption, but it has not appeared ion the prime time news. Erdogan is having to put out so many fires all at once these days that real achievements no longer may be touted as victories.