After firing hundreds of imams in Turkey's southeast region, the Religious Affairs Directorate wants to hand-pick preachers that will help the Kurds remember "real Islam." 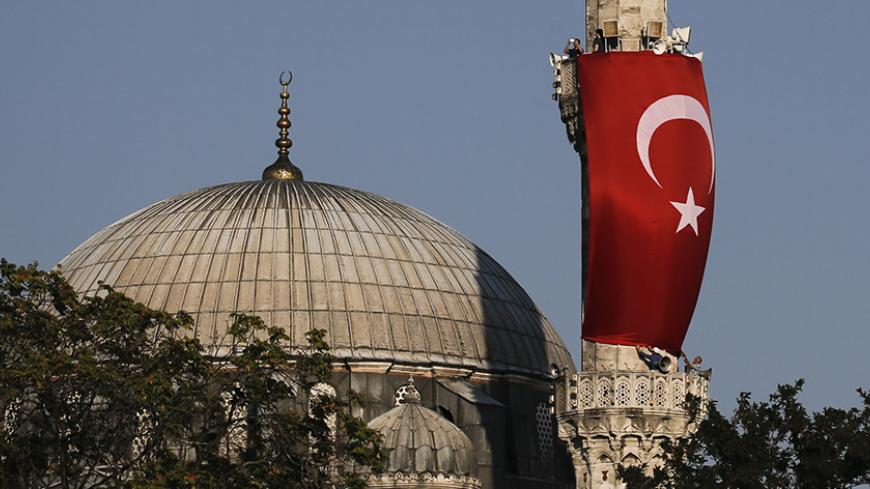 A Turkish flag is seen next to the dome of a mosque in Istanbul, July 16, 2016. - REUTERS/Alkis Konstantinidis

On Nov. 23, Turkish Religious Affairs Director Mehmet Gormez told a group of preachers that he was embarrassed by the July 15 coup attempt because it perhaps indicated he wasn't doing his official duty well. He told his audience to keep an eye on two groups while performing their duties. While he didn't name names, he was referring to the Kurdistan Workers Party (PKK) and the Gulenists.

News had broken in late October that the Religious Affairs Directorate (Diyanet) would be firing hundreds more imams, particularly in eastern and southeastern towns where the majority of residents are Kurds, for their alleged support of the PKK. This follows the directorate’s previous wave of firing more than 2,500 personnel accused of being Gulenists.

So how does the government plan to replace so many people? Clues can be found in the columns of pro-government writers and the ruling Justice and Development Party's (AKP) previous handling of the region. For example, Huseyin Ozturk, a Yeni Akit columnist, wrote Nov. 16 that female preachers are needed in southeast Turkey.

In a rather derogatory approach, Ozturk argued that the mothers and young girls in the region are superstitious and lack proper religious knowledge. He wrote that the local governors have urgently demanded that female preachers be dispatched to the region to educate the women on religious matters. Ozturk acknowledged that the Diyanet director is well-aware of the region’s problems, but the columnist pointed out that the situation is urgent.

After reading this, I contacted several local residents in Diyarbakir, Siirt, Sanliurfa and Bitlis. The residents were confident that there is no local demand for Diyanet to provide either male or female preachers. Several residents were indeed offended by Ozturk’s piece. They were reminded of the unsuccessful “1,000 mele" program of 2012, when the government sought to appease the Kurds. Mele is the name given to local imams, whom the government tried to put on its payroll.

Sait Sahin, a spokesman for Huda-Par — a Kurdish Sunni fundamentalist Islamist Party — told Al-Monitor, “We do not approve [of columns like Ozturk’s] that are offensive to the people of the region. If there really is a problem about women in the region lacking religious knowledge, what should be questioned is not the people, but the 90 years of Kemalist [secular] government policies, as well as the PKK.”

Sahin also advocated reform of Diyanet cadres and other government institutions. He said, “In addition, this lack of proper religious education is not an issue exclusive to the east and southeast of the country. Other parts of the country are not any different. Indeed, there might be other regions that are more in need.”

One former mufti who is an Islamic scholar and jurist told Al-Monitor, “For decades, the Turkish state struggled to 'Turkify' the Kurds. Finally, the Kurdish identity became more acceptable in Turkey with the peace process initiated by [President Recep Tayyip] Erdogan."

Since the process collapsed, however, "Erdogan and supporters in the ever-expanding Diyanet have found a new solution: 'Sunnifying' the Kurds. They claim that due to lack of development, Kurdish towns have been neglected and they forgot real Islam. They have nominated male imams and preachers, but it has not been effective,” the scholar said. Instead, thousands of people in the southeast joined civilian resistance movements, which included local, unofficial Friday prayers. Civilian Friday prayers meant boycotting the government mosques and holding the prayers in the street, with an unofficial imam, in Kurdish.

The problem is, Diyanet insists that it represents all Muslims. Different groups in Turkey resist this, such as Alevis, Shiites and Kurds. Nimetullah Erdogmus, a former mufti of Diyarbakir and a parliamentarian from the pro-Kurdish Peoples’ Democratic Party (HDP), told Al-Monitor, “Unfortunately, either the mele or the female preacher [vaize] plans of Diyanet are not in response to public demands, but rather planned in Ankara, because the directorate feels an urgency to play its part in managing the problem. So it generates programs like this, which do not produce any useful results. Indeed, locals — due to years of unsuccessful assimilation policies — approach Diyanet-nominated personnel with suspicion, asking them where they are from and why they are not trying to teach Islam to their own town’s people instead of preaching here."

The public’s suspicions are not baseless. When we look at the official responsibilities of a vaize as prescribed by Diyanet, we see that one of the expectations is for them to conduct research about national, moral, social, cultural and religious values of the communities they are assigned to and report back to Ankara. Given decades of conflict with Ankara, locals view any offer of assistance with doubt, suspecting ulterior motives.

In addition, Erdogmus explained that aside from Alevi Kurds, most Kurds belong to the Sunni school of Shafi, whereas most Turks are Sunni Hanefi. The Diyanet is a Hanefi institution as well. That is why the Turkish government has hoped to turn local mele imams into official imams with a paycheck and guidelines on how to conduct their sermons. However, Erdogmus told Al-Monitor, “In the region, religious directives are important. There are centuries-old traditions. Just like with Alevis, [the government has] failed with most of the Kurds as well with regard to religious services. For example, people here want to listen to sermons in Kurdish. This is a basic right.”

Indeed, Diyanet assigns personnel from all over Turkey to mosques in the southeast and, like other government officials, these people receive a higher salary for serving in a hardship zone. But the southeast region is in need of “an army of preachers,” according to Diyanet’s reports. It is difficult to find personnel willing to serve in this region, particularly with increasing security risks.

So now a supersized Diyanet may be dispatching an army of male and female preachers to Kurdish-majority towns. Would those imams dissuade the public from supporting the PKK, HDP or any other political movement? Would their purpose — to re-teach Islam to the Sunni Kurds and "Sunnify" Alevi Kurds and others — help establish peace?

A lawyer from Sanliurfa speaking on condition of anonymity told Al-Monitor, “AKP says they are pious and the PKK is a bunch of atheists, but Kurds say we are more pious than Turks. This is not a competition anyone can win. Government efforts to intensify religiosity only backfire.”

Moreover, he argued, “The goal [of Diyanet] is not just to teach religion to the Kurds, but rather to have access through the female preachers into the homes of Kurds, as well as to help Syrian refugees settle and assimilate into the area. I mean, look at Diyanet’s webpage. They post photos of reconstruction of mosques in Cizre and Sirnak. Shouldn’t they first reconstruct hospitals, schools or homes?” These observations indicate Diyanet’s plans are not destined for success in the southeast.