The first Kurdish-language Quran published by Turkey’s state-run Religious Affairs Directorate has provoked a political outcry ahead of general elections in June. 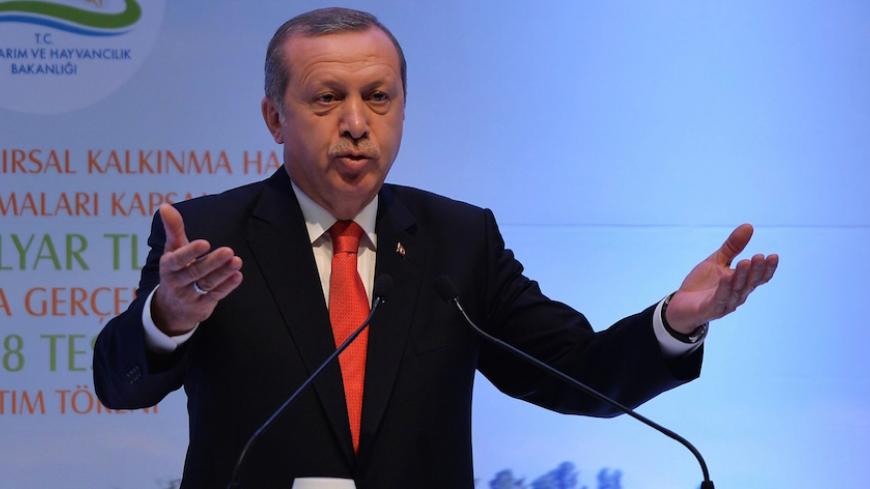 With the campaign in full swing ahead of the June 7 parliamentary polls, Turkey has been introduced to the first “official” edition of the Quran in Kurdish. The public announcement of the holy book’s Kurdish edition, published by the Religious Affairs Directorate after five years of work, was reserved for President Recep Tayyip Erdogan.

Addressing crowds in Batman and Siirt in the first week of May, Erdogan brandished a copy of the Kurdish-language Quran as he lashed out at the pro-Kurdish People's Democracy Party (HDP), the chief rival of the ruling Justice and Development Party (AKP) in Turkey’s mainly Kurdish southeast. “They have nothing to do with religion. Look, the Religious Affairs Directorate, which they want to shut down, has printed the Quran in Kurdish for you,” he said.

It was not the first time that a Kurdish-language Quran has made an appearance at an election rally. During his presidential campaign last year, Erdogan had also brandished a Kurdish copy of the holy book, printed by a nongovernmental organization. This time, however, the indignation he triggered was unprecedented.

Opposition leaders whose electoral platforms have focused on rampant poverty and unemployment, an ailing education system and the government’s authoritarian tilt suddenly found themselves caught up in a controversy over the Quran.

Erdogan “is exploiting the Quran in politics. May Allah give him wisdom,” said Kemal Kilicdaroglu, leader of the main opposition Republican People’s Party (CHP). The CHP also lodged a complaint with Turkey’s radio-television watchdog that Erdogan was breaching the president’s constitutional impartiality by effectively campaigning on the AKP’s behalf. “The president is making utterly biased political speeches aimed at the elections, exploiting religion and explicitly targeting opposition parties by engaging in polemics with their leaders,” the complaint said.

The HDP, for its part, filed a complaint with the Higher Electoral Board, saying, “By brandishing the Quran to the masses, Erdogan is using the Quran, a religious symbol, as a propaganda tool.” The board rejected the complaint.

Erdogan responded to the criticism, retorting, “I grew up with the Quran; I live by the Quran.”

While politicians exchanged barbs, Mehmet Gormez, the head of the Religious Affairs Directorate, which the HDP is pledging to abolish, gave an exclusive interview to Haberturk on May 4, in which he criticized himself over the long overdue Kurdish-language Quran. “We should have done this 20 or 30 years ago. We feel embarrassed today. We should have published the Quran and hadith books in all languages by now. Ignoring the language of Kurdish-speaking citizens and failing to print a single publication [in Kurdish] has been a great deficiency. At a time when books are being translated into all languages, from Russian to Chinese, the delay on this issue is our own failure,” he said.

The former head of the Religious Affairs Directorate, Mehmet Nuri Yilmaz, also denounced the use of the Quran in campaigns. “Brandishing the Quran at rallies is wrong,” he told Al-Monitor. “‘We’ve translated the Quran to Kurdish, so vote for us’ — is this what they are trying to say?”

Nimetullah Erdogmus, a former mufti running for parliament on the HDP ticket, was equally critical. “We are questioning the Religious Affairs Directorate, but some are manipulating this, trying to create the impression that we have a problem with the people working there,” Erdogmus, who worked for the directorate for three decades, told Al-Monitor.

“We are questioning the Religious Affairs Directorate system. What purpose does it serve? Does it really serve religion, society and faith or the state? We have to make this clear. If it does serve the state, why do we assign it such an important mission? The Religious Affairs Directorate is an institution of the state and that was the purpose of its creation. This is an ideology that has persisted since the Umayyads and the Ottomans,” he added.

Erdogmus welcomed the Quran’s Kurdish edition, but questioned the timing of the publication. “The Religious Affairs Directorate’s failure to offer services in Kurdish has been a great deficiency. Even the Kingdom of Saudi Arabia began printing the Quran in Kurdish a few years ago, distributing it to hajj pilgrims. This means we are trailing authoritarian regimes like this kingdom,” he said. “Bringing up the Kurdish Quran just ahead of elections has led the Kurdish people to think that politicians remember them only during election time. This move will not impress the Kurds. Those who are exploiting the issue as apolitical material will make no gains out of it.”

The Religious Affairs Directorate has printed 10,000 copies of the Kurdish-language Quran and has already begun distributing them. It now plans to print the holy book in 15 of the world’s most widely used languages, including English, French, German Russian and Spanish, and distribute the copies for free.

Yilmaz backed the idea of free Quran distribution across the world in local languages. “It will be an important service in terms of contributing to a better understanding of Islam, popularizing Islam and combating Islamophobia,” he said.