Thousands of pious Kurds, including entire tribes, have parted ways with the AKP, convinced that it has no real intention of reconciling with the Kurds. 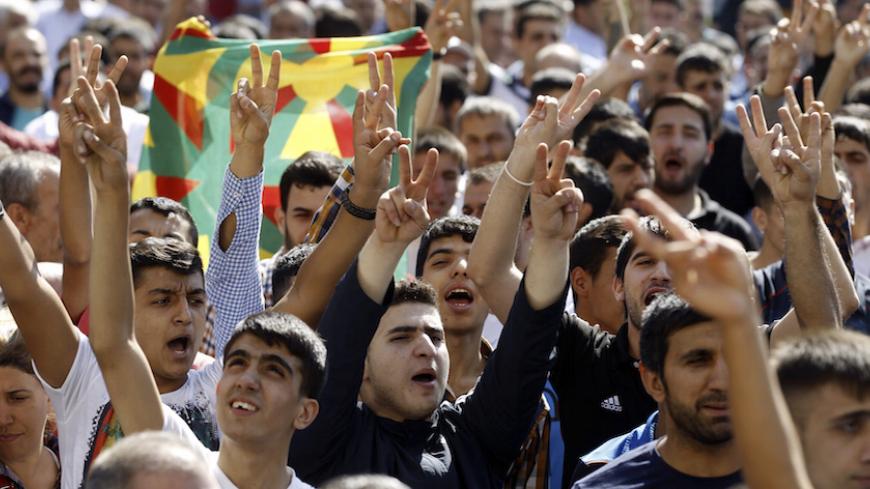 With only weeks to go before Turkey’s June 7 general elections, the ruling Justice and Development Party (AKP) is using every means to stop the pro-Kurdish People's Democracy Party (HDP) from passing the 10% threshold to enter parliament. The HDP, for its part, is bent on overcoming the barrier and spoiling President Recep Tayyip Erdogan’s dream of becoming an omnipotent, executive president. While campaigning on a brand-new platform of nationwide appeal, the HDP is resorting also to the oldest of vote-pulling methods.

To bolster the HDP, the Democratic Society Congress (DTK), created in 2007 as an umbrella organization for Kurdish political and civic groups, has been busy luring Kurdish tribes — and their block votes — to the HDP. As a result, many formally pro-AKP tribes have changed allegiances in recent weeks.

Traditional arbitration mechanisms have survived to date in Turkey’s eastern and southeastern regions, settling blood feuds and other disputes out of court. The DTK has transformed this tradition to a major tool of modern politics. Its social reconciliation and dialogue commissions — known also as “persuasion commissions” — are now working to attract rightist and conservative tribes to the leftist HDP camp.

Musa Farisoglu, the DTK member in charge of the commissions, told Al-Monitor that the commissions are made up of 15 to 21 members, including local notables from various walks of life, clerics and civil society activists.

Earlier this month, the Raman tribe in Batman, estimated to boast some 20,000 voters, made the headlines with a crowded ceremony that marked its shift to the HDP. The move was significant also because the tribe includes many village guards, a government-armed Kurdish militia that has backed the army against Kurdish rebels. Its leader, Faris Ozdemir, has served two parliamentary terms on the ticket of a center-right party.

The AKP took another blow in Batman as 300 people from the Alpahanlar clan, relatives of Agriculture Minister Mehdi Eker, the AKP’s Kurdish heavyweight, collectively joined the HDP. The Baravi tribe, which has about 2,000 voters, soon followed suit. The Alika tribe, the largest in Batman’s Besiri district, also joined the HDP, in what it said was a protest against the AKP’s policies on the Kurdish question.

In Baskale in Van province, the AKP’s entire district management resigned and joined the HDP. The move came as a reaction to an AKP candidate who paid a condolence visit to a local family in the company of police, despite advice that such a move goes against local tradition, visited shopkeepers in the escort of riot police and attacked the HDP, saying the town would be “saved from those extortionists.”

In Suruc in Sanliurfa province, the Erdogan, Kilicaslan, Kalkan, Sahin and Boydan tribes staged crowded marches before joining the HDP. The entire local AKP leadership that ran the party’s district office for 12 years is said to belong to those five clans.

In Kahta in Adiyaman province, 12,000 members of the Turanli tribe, which includes the daughter of a prominent tribal chief who was one of Mustafa Kemal Ataturk’s right-hand men in the Liberation War, also collectively joined the HDP. The Turanli tribe and many other conservative Kurds switching allegiances have been heavily influenced by Dengir Mir Mehmet Firat, a Kurdish co-founder of the AKP who is now running on the HDP ticket. Firat himself belongs to one of Turkey’s largest Kurdish tribes.

The HDP received a further boost in Siirt, where the Kiroyi tribe announced its support, even though one of its own, Ali Ilbas, runs on the AKP ticket. The commissions managed to enlist the support also of the ethnic Arab Karajna tribe in the Sanliurfa district of Ceylanpinar and a Turkmen village in Bozova.

According to Farisoglu, some clans have decided to back the HDP without publicly declaring their decision, including the Reskotan, Hamidi, Seyhan and Metina tribes. In addition, at least 40 headmen have agreed to join the party individually.

The tribes that have changed sides had served as strongholds for rightist and conservative parties for decades. The commissions’ persuasion methods and the targeted tribes themselves derive their clout from the power of traditions. The HDP’s success in using traditional methods to reach out to the tribes, involving the support of local mullahs, may come as a surprise, if not a contradiction, given the party’s innovative and bold vision on women’s rights, male-female co-chairmanship in all leadership posts, minority rights, education in the mother tongue and the settlement of the Kurdish question.

By persuading only the tribal chief, community leaders secure the backing of thousands of people. No doubt, this raises questions over democratic norms resting on the individual’s own will. Yet, there is a crucial difference here. Throughout Turkey’s recent political history, ruling parties or opposition parties vying for power enlisted tribal support with pledges of material and political benefits. The HDP, however, stands no chance of coming to power, and peace is the only pledge it can make.

Then, another question pops up: How people who have stood on opposite sides — one fighting the state, the other fighting for the state in the ranks of the village guard — are able to come together? Several factors stand out:

The 2011 air raid that killed 34 young Kurds from the village of Roboski on the Iraqi border, Ankara’s hostile rhetoric against the Kurdish resistance to the Islamic State’s siege of Kobani, its description of Kurdish fighters as “terrorists,” Erdogan’s electoral shows with Kurdish-language Qurans and Ankara’s backpedalling on the peace process have all caused indignation among pious and conservative Kurds as well.

Farisoglu stressed that their efforts were not limited to the elections. “We are working in a broader framework to secure our internal peace in Kurdistan. The Raman tribe, for instance, had had a peculiar attitude since 1977. We have now secured a basic common understanding. We are seeking to resolve differences, achieve internal reconciliation and build a unified stand. Social peace is our objective,” he told Al-Monitor. “We do not reveal everything publicly, but very important developments are taking place. We are not working according to some hierarchy. We are organized on the basis of radical democracy and local [priorities].”

Asked about how far the tribal shifts could sway the elections, Farisoglu said, “I wouldn’t give a percentage, but our efforts have expanded significantly. Major popular segments are gravitating to the HDP. This has led to panic in the AKP, and they are trying to make some countermoves. But the AKP’s attempts at [luring] the tribes remain unanswered. That’s why they are trying to drag us into provocations. The bomb blasts [at HDP offices] in Adana and Mersin are the latest example.”

In remarks to Al-Monitor, Altan Tan — an HDP lawmaker who seeks re-election and stands out as one of the party’s pious figures — offered the following assessment: “Communities in Kurdistan are tightly knit with bonds dating back several centuries. Some clans are pro-HDP, but others are not. To persuade the latter, commissions were set up of mullahs, well-known sheikhs and prominent figures. The commissions are able to persuade five out of every 10 clans they contact. No doubt, tribal leaders joining the HDP will not change the outcome much, but this creates a certain synergy. Collective shifts [to the HDP] have the impact of a stun grenade. Young people in the tribes no longer obey what their fathers say. They were already voting for the HDP. Now their fathers have become HDP supporters too.”

Tan singled out government policies as the real factor behind the changing attitude of conservative Kurds, outlining five major factors repelling tribes from the AKP:

To contain the tide, the AKP leadership has launched attacks on HDP co-chair Selahattin Demirtas on three controversial issues. First, it is trying to misrepresent the HDP pledge to replace the Religious Affairs Directorate with a Directorate of Faith Affairs as an HDP plan to do away with Islam.

Second, AKP leaders are manipulating the remarks Demirtas made when the government banned May Day demonstrations at Istanbul’s Taksim Square, which has acquired symbolic importance since dozens of workers perished there in May Day bloodshed in 1977. “Don’t take my words as a literal comparison, but Muslims go to the Kaaba for the hajj and Jews go to Jerusalem. Religions have their centers and shrines. You can’t do [certain rituals] elsewhere,” Demirtas said. “I don’t mean it’s a religious belief, but, yes, Taksim is an indispensable venue for workers. Without a celebration at Taksim, one cannot claim that May Day has been celebrated in Turkey.” Picking on those remarks, both Erdogan and Prime Minister Ahmet Davutoglu continue to claim that Demirtas had said that Taksim was “the workers’ Kaaba.”

The third controversy surrounding the AKP campaign is the claim that Demirtas had eaten bacon during a trip to Cologne.

Religious sensitivities have come to the fore as never before in this election. Some argue the government’s countermoves have stalled the pious electorate’s shift to the HDP, but no healthy data exists to confirm this claim.