Kurdish frustration with Ankara’s shift from a policy that favored settlement with the Kurds to hard-line nationalism could sway the outcome of critical snap polls in June. 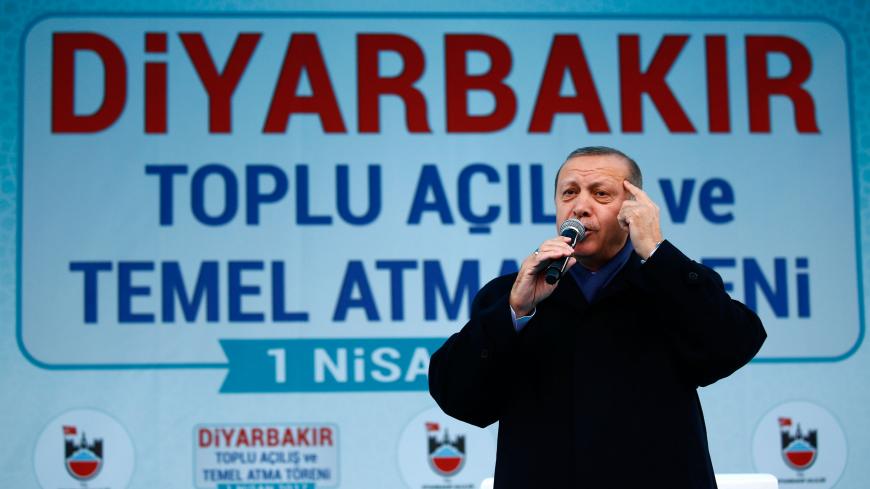 Turkish President Recep Tayyip Erdogan addresses supporters during an April 1, 2017, rally in the Kurdish-dominated southeastern city of Diyarbakir, Turkey, for the April 16, 2017, constitutional referendum that wound up expanding presidential power in the country. - REUTERS/Murad Sezer

As Turkey braces for snap elections on June 24, the ruling Justice and Development Party (AKP) risks losing the support of an important segment of its base — conservative Kurds — due to its sharp shift to hard-line nationalism. A major question now is how to lure the vote of the resentful Kurds, who are emerging as a key player in the elections.

Recent surveys suggest that Kurdish voters could become kingmakers in the crucial legislative and presidential polls, which will mark Turkey’s transition to a new governance system headed by an omnipotent president. In an unprecedented flurry of contacts, opposition parties are looking for various forms of cooperation to beat President Recep Tayyip Erdogan in what many see as the last chance to save Turkish democracy.

Kadir Atalay, the owner of the PIAR polling company, said the predominantly pious Kurdish supporters of the AKP and Erdogan are no longer on board. Atalay told Al-Monitor that the main reason Kurds backed Erdogan was their trust in his commitment to resolve the Kurdish question, and that now, after the U-turn he made, they feel “deceived and abandoned.”

Ahmet Faruk Unsal, a conservative Kurd who served as an AKP lawmaker but has now fallen out with the party, confirms the deep sense of disappointment among the Kurds.

“In 2002, when it was newly established, the AKP’s messages suggested it would open up the locked doors of democracy, and in the 2002-2007 period, its political performance was congruent with those messages. In the 2007-2013 period, it also launched the settlement process. That was the reason for the [Kurdish] support,” Unsal told Al-Monitor.

The AKP’s alliance with the far-right Nationalist Action Party (MHP), the ferocious crackdown on Kurdish militants that devastated whole towns and neighborhoods in 2015-2016, Ankara’s threats to Iraqi Kurds over their independence bid last year and, most recently, the Turkish offensive on the mainly Kurdish city of Afrin in Syria have all disillusioned the Kurds, according to Unsal. “That’s why the political preferences of Kurds have significantly shifted,” he said.

According to Atalay’s findings, antagonizing Kurdish supporters has cost the AKP about 4 points of its vote. The party won 49.5% in the last general elections in November 2015. “Our surveys on AKP losses indicate that the party has lost 4 points through Kurdish voters who are against the environment of conflict and support the peace process,” he said.

Opposition parties are now eager to attract the disgruntled Kurds. Chief among them is the Peoples’ Democratic Party (HDP), which represents nationalist Kurds and leads the Kurdish political movement in Turkey. After the prospect of early elections emerged last week, HDP co-chair Pervin Buldan quickly made it clear that the party’s election strategy would rest on Kurdish disillusionment with Ankara. “While going to Afrin, you spoke of delivering an Ottoman slap, but now you get ready to receive a Kurdish slap. You will choke on the songs you were singing on the way to Afrin,” she said April 17.

Meral Danis Bestas, the HDP’s parliamentary whip, said Kurds across the political spectrum are bracing to punish the government at the ballot boxes. “The Kurds — even those who are not HDP supporters — will respond to the Afrin operation, the removal of Kurdish-language signs [in Turkey’s southeast] and the imprisonment of [Kurdish] lawmakers,” she told Al-Monitor. “An incredible policy of rejection and denial is underway against the Kurds. The Kurds are a politicized people, and they will definitely respond to it.”

Bestas added, “Our message to all our people is this: You are the ones to give the best answer to the hostility displayed against you. We will fully support your response.”

Atalay defines the profile of the AKP’s Kurdish supporters as “conservative, Sunni Muslim and pious Kurds.”

Ayhan Bilgen, one of the HDP’s few conservative lawmakers, told Al-Monitor that the election campaign would coincide with the holy Muslim month of Ramadan. While he said he believes Erdogan will draw on the occasion to use a deeply religious rhetoric in a bid to keep pious Kurds on his side, Bilgen is confident that the HDP is capable of producing an efficient counter-rhetoric. “We will block the exploitation of religion,” he said.

Atalay said the disgruntled Kurdish vote is currently divided between the HDP, the Felicity Party, which, like the AKP, has its roots in political Islam, and the Good Party, created several months ago by high-profile defectors from the MHP opposed to their party’s alliance with Erdogan. Still, important numbers of the disgruntled Kurds remain undecided, and they could either shun the polls or end up supporting Erdogan again if they fail to find an alternative in a short period of time, Atalay said.

The HDP is working on strategies to lure Kurdish voters who have previously shunned the party. In early April, a high-level HDP delegation traveled to Erbil for icebreaking talks with Iraqi Kurdish leader Massoud Barzani, who enjoys widespread respect among Turkey’s conservative Kurds.

Bilgen, who is also the HDP’s spokesman, told Al-Monitor that the party would also seek dialogue with fellow opposition parties.

Abdullatif Sener, a former deputy premier who has also fallen out with Erdogan, said opposition parties should cooperate with the HDP, for the party is “the only medium to snatch away the Kurds who have supported the AKP and Erdogan.”

If Kurds are to be the kingmakers in the upcoming polls, the most efficient strategy against the AKP-MHP alliance appears to be the creation of an opposition bloc that will embrace the HDP, with the HDP itself embracing the disgruntled Kurds.