Turkey's 2019 budget includes a sharp increase for its Religious Affairs Directorate, drawing criticism of what some see as a vast overreach in influence. 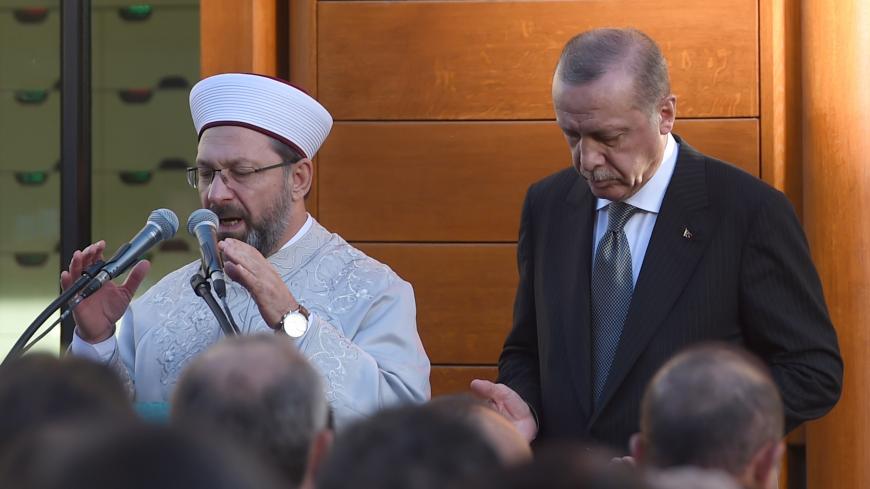 Are you planning a trip to Turkey in the near future? You're in luck! You will not only find a touristic adventure but also an education in Islam!

On Nov. 2, Cumhuriyet published a comprehensive report on the Diyanet's upcoming services for 2019. They include a “mosque guide” to help local and foreign tourists understand “Islamic history, culture, architecture, art and the religion itself correctly.” The Diyanet also has plans to publish pamphlets about the Prophet, the Quran and Islam for tourists.

The owner of a prominent tourism agency with 25 years of experience told Al-Monitor on condition of anonymity, “Our guides have the proper education and certification to talk about all touristic locations, including mosques. They are professionals. The Diyanet has done research on how many tourists visit mosques [and identified] the top four languages as English, Arabic, Russian and German. My question is will they allow tour guides who do not receive training by the Diyanet to lead tours to historic mosques? Most of the imams we encounter do not even speak Arabic. This plan just seems like another gimmick to increase the Diyanet’s budget.”

The agency has introduced several new categories in its exorbitant 2019 budget. Its rapidly growing budget has generated heated criticism, particularly because Turkish President Recep Tayyip Erdogan has repeatedly announced since September that Turkey's public expenditures will be curtailed. For instance, the Science, Industry and Technology Ministry’s budget has been reduced by 56% for 2019. In the meantime, the Diyanet’s budget is to increase by 36% from 7.7 billion to 10.5 billion Turkish liras (about $1.4 billion to $2 billion). To put it into perspective, this is five times the budget of Turkey's intelligence agency and also that of Energy Ministry and six times that of the Turkish Parliament. At a time when newspapers are going bankrupt because of paper scarcity and expense in Turkey, the Diyanet has spent over 14 million liras ($2.8 million) on free books in the first six months of 2018.

Why does the Diyanet need such extravagant funds, and how does it justify its skyrocketing spending? Most of the expected increase is to be spent on new personnel. So the Diyanet is not only training tour guides but also planning to provide more Quran courses for refugees and seminars for its existing personnel at prisons, hospitals and drug and alcohol rehabilitation centers. The Diyanet plans to deliver seminars for halal food certification, prayer times and several others for Islamic financial and banking systems focusing on Istanbul’s stock market. The Diyanet is also expected to work together with the Scientific and Technological Council of Research to track the moon for Ramadan.

The Diyanet has special plans for children such as producing 3-D animated movies explaining Islamic practices and morals and holding reading hours for children with imams at mosques in big cities. There are plans to educate couples who are planning on marriage and publishing how-to books on keeping a family together, taking care of babies and moral values in the age of social media. On Nov. 13, the Diyanet announced a protocol signed with the Ministry of Family, and Social Services to strengthen families entailing several studies on family values.

A retired mufti who spoke on the condition of anonymity told Al-Monitor, “The Diyanet’s budget is a disgrace. Its planned activities are much ado about nothing. I am ashamed for them. It is no longer just the mosques; their reach goes into all government institutions and beyond. I am not even sure how much they value Islamic laws anymore. For instance, the agency collects interest, which is strictly forbidden in Islam. They are also exclusionary — that is, they only hire graduates of imam and preacher high schools.”

“There are youth centers, family and religious guidance bureaus, morality guidance centers and more rigorous programs coming up for the youth,” said a theology professor at a prominent state university. The Diyanet’s 2019 budget includes plans for publications to warn the teenagers against the dangers of atheism and agnosticism. The agency plans to reach young people from all walks of life with its Diyanet Volunteer Youth program, whose goal is to raise a generation committed to national and moral values.

The retired mufti emphasized how this approach is not Islamic, saying, “Islam is universal. It does not advocate nationalism or patriotism. Hence, the agency again contradicts its core religious values.”

It is ironic that the more criticism the Diyanet receives, the more expansive its budget and programs become. For decades, the Turkish public has been critical of paying taxes to fund an agency that does not serve most of the public’s needs, such as non-Muslims, non-Sunnis and Sunni Muslims who oppose government control over religious activities.

On Nov. 9, the Diyanet’s president, Ali Erbas, visited outspoken Kadir Misiroglu, who has made mind-boggling comments about the founder of Turkey and the war for independence. Erbas’ photos with the fez-wearing Misiroglu were released to the public on Nov. 10, the 80th anniversary of Mustafa Kemal Ataturk’s death. All the opposition parties except for ultra-Islamist Felicity voiced harsh criticism of Erbas and called for his resignation. Erdogan remained quiet for a week.

It is difficult to imagine Erbas’ visit to Misiroglu had been made without the prior approval of the palace, and Erdogan himself had paid a visit to the controversial figure in February.

On Nov. 17, during the opening of five city gardens in Istanbul, Erdogan stood next to Erbas, who led the prayer. Erdogan vowed not to allow offensive statements against Ataturk or anyone else for their religious beliefs. A day later, Erdogan said, “I do not approve of efforts to pull the Diyanet into political arguments.”

In the midst of this public uproar, on Nov. 9, an imam announced in Samsun province that he was resigning to run in municipal elections. He added that by law, if he loses the election he will continue his work as an imam at another mosque. Yet a Nov. 6 Diyanet press release confirmed that its employees are forbidden from involvement in politics.

Despite the public uproar about the role and cost of the Diyanet and its president’s activities, the government has not budged from its existing policies. Why is Erdogan so keen to expand the agency’s role? “2019 will be a year of hands-on Islamization,” said one community leader in Ankara who has been involved in Erdogan’s monthly gatherings since 2015. “We as the muhtars of each street served the best we could. Now the torch passes to the imams, vaiz [those who make the calls to prayer] and hafiz [those who have memorized the Quran].”

Erdogan opened up the political and public space to a variety of Islamic orders, one of which was the Fethullah Gulen movement. Now he is concerned about their influence over social media, publications and independent mosques. To counter their effects, Erdogan’s government has arrested several “fake sheiks,” as they are commonly referred to in Ankara. Erdogan strongly believes there is a hunger for religious education that has yet to be met in Turkey.