Supporters of proposed amendments to Turkey's constitution are using some vivid imagery in their campaign. 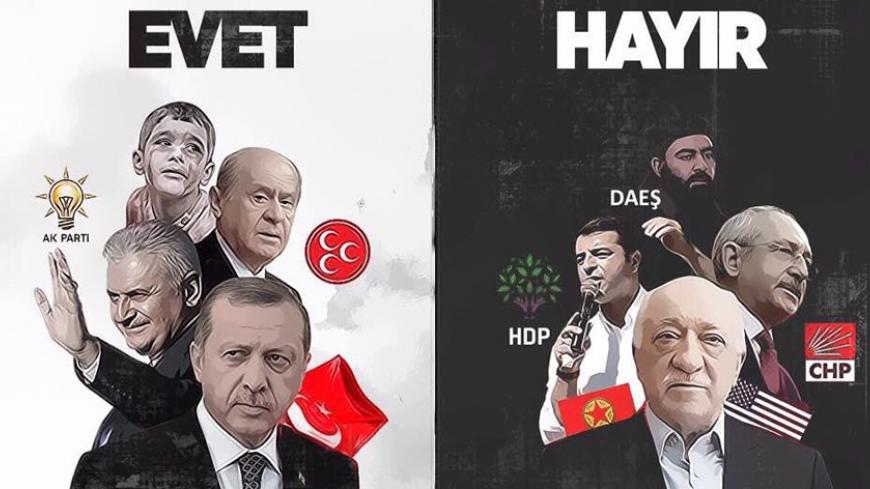 Turkish President Recep Tayyip Erdogan continues to rev the engine of his campaign supporting constitutional amendments. However, what the effort really needs is a solid steering alignment. It's all over the road.

The world according to Erdogan is full of villains conspiring against him, some perhaps real, some maybe imagined: Gulenists, Kurds, the Islamic State (IS), the media, the United Nations, Europe and even the pope.

If the constitutional amendments are approved in an April 16 referendum, the president's temporary powers under emergency law could become permanent. This would eliminate many of the checks and balances on the presidency, do away with the role of the prime minister and allow the president to skirt parliamentary and Cabinet approval and pass laws by decree.

Various posters have appeared supporting the changes to the constitution. On Feb. 12, Ankara’s colorful and longtime mayor, Melih Gokcek (a member of the ruling Justice and Development Party, AKP), tweeted “Is there anyone who opposes this?” over the image of a poster that reads “The decision is yours.” On the left-hand side of the poster, along with the Turkish flag displaying its crescent and star, are the images of Erdogan, the prime minister and the chairman of the Nationalist Action Party. Above them appears the word “Yes."

On the right-hand side are the naysayers: the imprisoned chairman of the pro-Kurdish Peoples' Democratic Party, along with the leader of the opposition Republican People’s Party, Kemal Kilicdaroglu. In the forefront is the alleged culprit of the July 15 coup attempt and Erdogan’s nemesis, Fethullah Gulen. But most interesting, perhaps, is the face lurking in the back. Behind the left-wing political parties' representatives, under the word “Daesh” (IS), is a photo of IS’ leader, Abu Bakr al-Baghdadi. Apparently Baghdadi will be upset if the amendments are approved.

A different version of this poster also has become popular on social media: The left-side images are the same but instead of "Yes," the poster reads "Crescent." On the right side, the word "Cross" replaces "No" and underneath is an image of Kurdistan Workers Party (PKK) leader Abdullah Ocalan. At the bottom, the poster reads, “If you say ‘yes,’ the crescent will win, if you say ‘no,’ the cross will.”

Erdogan has been repeating the slogan “The battle of cross against the crescent has started” during his rallies, blaming mostly Europe for initiating this "crusade." He has also made several accusations that those who oppose the amendments are aligned with terrorists. Mostly, Erdogan’s focus has been on the Gulen movement and the Kurds — so how did Baghdadi get pulled into the picture of "crusaders"?

A few intriguing events skittering in the background could possibly explain why such wild and inconsistent claims are being made to generate support for a yes vote.

As Al-Monitor explains, the latest opinion polls predict a possible loss for Erdogan. In this rather confused "yes" campaign, Baghdadi’s face is not the only mind-boggling image. For example, for days, mainstream Turkish media have been sharing images of Pope Francis speaking before EU leaders observing the anniversary of the EU's formation March 25. Erdogan was not pleased with this meeting. He said, “The crusader alliance finally showed its face. Since when is the pope a part of the EU?” Erdogan then went on to allege that European countries support terrorism and suggested that the weapons they provide to such organizations will be turned around on them.

The AKP’s rather populist and incoherent terror rhetoric is an effort to preempt a possible backlash from different Western countries accusing Turkey of supporting illicit networks directly or indirectly. News reports from all over the world showing Erdogan’s loss of control over different state institutions have reached a scary point. Foremost, despite all efforts, the AKP has failed to convince the West that the Gulen movement is a terror organization.

While Erdogan and the AKP are busy labeling their critics terrorists and claiming to be on the hunt for PKK members, IS and the Gulen movement globally, news is popping up that possibly links the AKP and its agencies to terrorist activities.

For example, Muhammed Murteca, the head of the Turkish Cooperation and Coordination Agency (TIKA) in Gaza, was taken into custody in mid-February. On March 21, Israeli Foreign Ministry spokesman Emmanuel Nahshon announced Murteca’s arrest and accused TIKA of funneling international aid to terrorists, particularly to Hamas, with the help of a Turkish "terror" nongovernmental organization, the International Humanitarian Fund (IHH). The IHH organized the Mavi Marmara flotilla in 2010. Nahshon was clear that Turkey was a victim in this alleged plot, not a culprit. The AKP-aligned media did not prioritize the arrest in its coverage.

TIKA is a government-funded agency that operates under the prime minister’s office. On March 21, TIKA posted a tweet about the arrest, explaining that organizers have sought information from Israeli authorities. One senior bureaucrat told Al-Monitor, “We do not endorse any violent activities. If this Palestinian national [Murteca] has been corrupted by terrorist groups and he misused his authority, that is not about TIKA or Turkey, it is his individual crime.”

Another case is from Albania. In January, a female teacher was arrested for allegedly disseminating pro-IS propaganda to her students. Although Turkish media did not report the details, Sitki Ozcan from Zaman Amerika tweeted, “The school at which IS propaganda took place was built by the Turkish government. Erdogan attended the opening ceremony through videoconference.” The tweet also showed TIKA’s Albania branch proudly announcing the ceremony June 7. Ozcan also mentioned that Turkey’s Directorate of Religious Affairs (Diyanet) frequently visited the school.

Indeed, Diyanet is under scrutiny elsewhere in Europe as well.

A March 27 Foreign Policy article with the headline "Erdogan's International Network of Muslim Cleric Spies," says German authorities “charged 16 clerics with illegal ‘secret service collaboration’ and searched mosques and apartments, confiscating computers and reams of paperwork.” On April 15, Al-Monitor was one of the first international media outlets to raise a red flag about Diyanet acting as Erdogan’s proxy all around the world with the mission of collecting and reporting intelligence to the prime minister’s office directly.

After the July 15 coup attempt, these activities intensified on multiple levels. Some 300 imams serving in Europe were called back to Turkey on the suspicion of being Gulenists. Several did not return, and two of them made the news March 24 for seeking asylum in Germany. Erdogan’s words antagonizing Europeans, and Turkey's National Intelligence Organization's amateurish tracking of Gulen members in Europe have put Turkish-origin Europeans in a difficult spot — so much so that even some imams in Europe have spoken out against Erdogan’s angry outbursts.

Turkey’s alleged links with armed nonstate actors and networks remain ambiguous. Yet the arrest of Turkish-Iranian businessman Reza Zarrab and the vice president of state-owned Halkbank for violating US-led sanctions against Iran indicate that financial issues are crucial. Facing challenges with narcotics, arms and human smuggling, Turkey has now also come under scrutiny for alleged money laundering through the porous Syria-Iraq border.

It seems whatever Erdogan touches is backfiring right before the referendum. The promises of visa-free travel to the EU, along with a quick and swift victory in Syria, have all ended up as major fiascos.

Finally, the referendum campaign slogans for the “yes” campaign tell a sad story. After the dismal failure of “The world is bigger than five” campaign (criticizing permanent members of the UN Security Council), now the new slogan is “Turkey is bigger than Turkey.” The video shows a handful of countries Erdogan has not yet picked a fight with — such as Pakistan and Turkic republics.

Another acerbic slogan for the yes camp says “Stamp the paper ["yes"] as if you are stamping on a foreigner.” Erdogan and his immediate circle are desperate to win 51% of the vote for the referendum's amendments, and they seem ready to do whatever it takes. So far, they have found the world's Erdoganophobia to be a good currency for mobilizing their base, while on the global scene their ambiguous relationships with different Islamist groups are surfacing. But for now, Baghdadi's image remains solidly against the amendments.