Complaints of torture on rise in Turkey's Kurdish southeast

The Turkish government no longer sees the need to conceal torture, especially of Kurdish women in the southeast of the country. 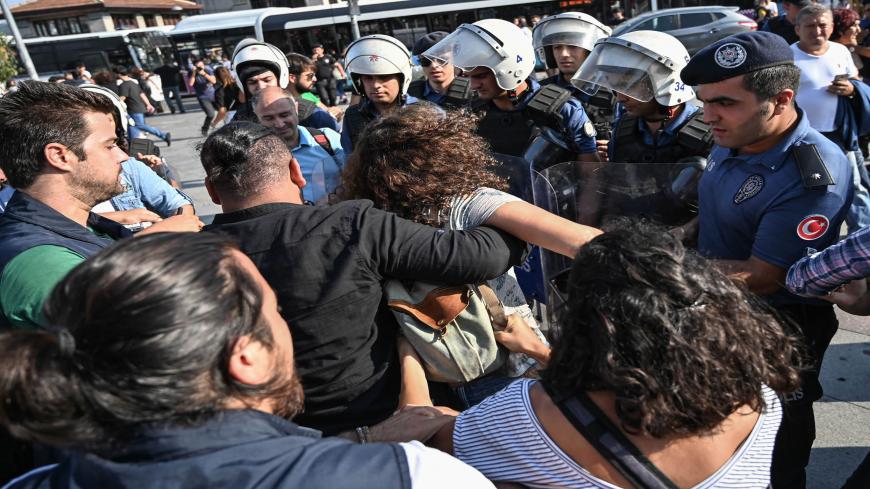 Turkish anti-riot police officers try to detain a woman demonstrating during a protest against the replacement of Kurdish mayors with state officials in three cities, in Besiktas district in Istanbul, Turkey, Aug. 24, 2019 - OZAN KOSE/AFP via Getty Images

Picture this: A woman is home alone in Diyarbakir province in Turkey's Kurdish-majority southeast. At 5 a.m., 100 policemen from counterterrorism and special forces units storm the apartment, instructing the neighbors to stay inside and not communicate with anyone. Then they sledgehammer the door and unleash two police dogs to attack Sevil Rojbin Cetin. But that is only the beginning.

Cetin is an activist in women’s movements and a former Peoples' Democratic Party (HDP) mayor, elected in 2014 and replaced by a government appointee in 2016.

Cetin was interrogated for 3½ hours in her apartment while her legs were bleeding from multiple dog bites. The apartment was turned upside down, while she was blindfolded and beaten.

She was stripped half naked with her hands tied, while photos were taken of her. The physical and sexual torture was coupled with verbal abuses; a gun was held to her head. “At one point she was taken to the balcony and the officer told her, ‘If your apartment was on the 5th floor, you would have jumped by now and we would not have to deal with you,” said Meral Danis Bestas, a pro-Kurdish HDP lawmaker.

Cetin’s Attorney Gulistan Ates, who took photos of her injuries after the ordeal and shared them with the press, was called to the police station and an investigation has been launched against him.

The 2019 US State Department human rights report emphasized that violations affect Turkey's Kurdish citizens disproportionally. Kurdish women or women who refuse to be model citizens in the eyes of the Turkish state are increasingly becoming targets of arbitrary arrests, strip searches, sexual violence in detention, insults and threats of rape.

Remziye Tosun, HDP lawmaker who has been targeted for wearing white scarves in the parliament, told Al-Monitor, “During the siege of Sur [in 2016], I stayed at home with my young children. Then they [security forces] took us outside; I had my two daughters with me — one was 18 months and the other nine years old. The security forces were determined to send my children to social services despite my pleas to call my family. But they sent my 9-year-old to an orphanage; my nursing child was allowed to stay in prison with me.”

Tosun said that since 2015 state forces have increased gradually the intensity of torture and abuse of women. “We have gone back in time — back to the days of Esat Oktay Yildiran. That is the mentality of the AKP [Justice and Development Party] right now; torture has come back with a vengeance.” (Yildiran was a military officer who was notorious for his gruesome torture techniques at the Diyarbakir prison in the 1980s.)

Tosun’s house in Sur was demolished, and she was imprisoned for 15 months with her youngest child. Despite all that has happened, she keeps her kind and compassionate spirit. “The thing that hurt the most was not the physical hardship but the humiliation. One day we were cleaning the newly built prison in Elazig, but we had little access to cleaning products. We saw a group of female guards staring at us, so one of the inmates asked why the guards laughed nervously among themselves. One replied, 'Look they speak, they are human.' This I cannot forget, but I understand.”

Tosun said that she has forgiven those guards, adding, “The prejudice against the Kurds, the sayings about the Kurds having tails and not being civilized is still happening because of the official education system. And that mindset helps justify cruel treatment and discrimination.”

The Kurds in Turkey are perceived as pseudo-citizens, and therefore as potential terrorists. The Kurds are accepted to some degree, and as long as they assimilate diligently they are viewed as prospective Turks.

Ayse Acar Basaran, HDP lawmaker and spokeswoman for the HDP’s Women’s Council, told Al Monitor, “Since July 2015, we have had over 16,000 members of our party detained by the security forces. About 4,000 are in prison.”

Basaran noted that all women’s organizations have been shut down since the July 15, 2016, coup attempt. Violence against women has spiked even further as men are given a blank check and women are left more vulnerable in their homes and on the streets. “When the government ended the peace process and intensified its aggressive security policies women became the biggest victims. Now they are arresting members of the two remaining women’s associations — Rosa Women's Association and TJA-Free Women’s Movement. The charges against the members include attending International Women's Day on March 8, promoting peace, searching for missing women and seeking justice for female victims of domestic violence. Women — particularly those in the Kurdish women’s movement — pose a direct challenge to the AKP’s wish to monopolize power, because they are so organized,” she added.

Eren Keskin, vice-president of Turkey’s Human Rights Association and a prominent attorney, told Al-Monitor that torture of women both “in detention and while being taken into detention is becoming routine. Torture is clearly defined as illegal in both the Turkish Constitution and several international treaties that Turkey has signed.”

In the 1980s, torture was hidden and frequently denied by government officials. Today, senior bureaucrats welcome and even encourage it. For example, Interior Minister Suleyman Soylu said in April, “I told [the security forces] when you catch them [terrorists] tear them apart.” Soylu also said that photos of the bodies would be made public. Some of those commenting on these images on social media suggest further gruesome acts on the alleged terrorists. In what seems to have become the normalization of torture and violence, the display of the mutated body parts of Kurdish women have become an event to celebrate.

Sebnem Korur Fincanci, president of the Human Rights Foundation of Turkey, announced that according to the foundation's records one in every 500 people in Turkey has been tortured.

HDP lawmakers are now asking who is responsible for torturing Cetin for 3½ hours, and who gave the order for this torture. The images of the torture did not cause an uproar among social media users. So far, no police investigation has been launched about any torture claims. The problem of impunity of government officials in Turkey has reached levels never seen before. Instead, we can expect more investigations for human rights lawyers, HDP lawmakers and journalists who dare to report cases of torture or abuse.

There are several loopholes in the law to protect torturers. Although torture is to receive severe punishment, the prosecution can easily turn the case into “an act of brutality,” which would not even cost the officer his job. These acts are becoming routine because they are condoned by the government and justified under the argument of “combatting terrorism” — with little to no room left to ask how torturing these women helps combat terror.

Turkey is regressing fast to the days when police officers marched chanting, “Damn human rights” — starting in 1992 at a funeral of four officers.