One woman's journey from prisoner to mayor

Diyarbakir Mayor Gultan Kisanak is among thousands of activists who served time in Diyarbakir prison after the coup in 1980, and like many she was tortured for refusing to renounce her Kurdish identity. 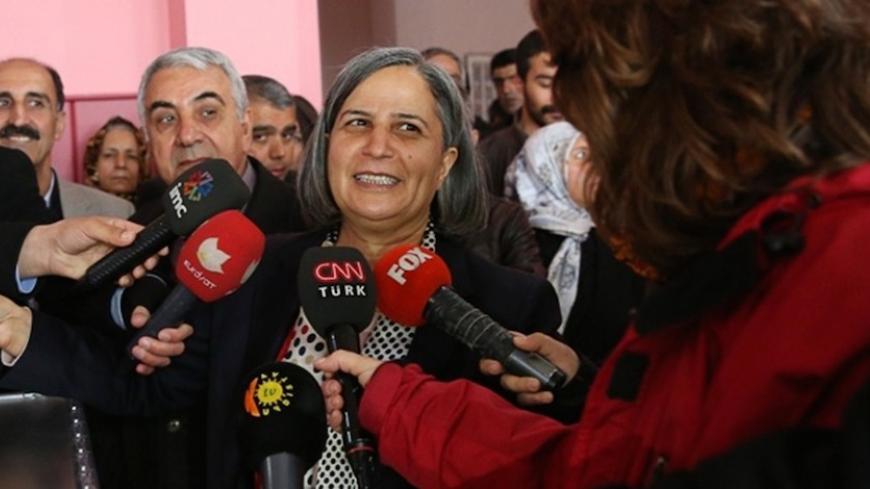 Gultan Kisanak, now mayor of Diyarbakir, speaks with journalists after casting her ballot in Diyarbakir on March 30, 2014. - ILYAS AKENGIN/AFP/Getty Images

Gultan Kisanak is the first female mayor of the southeastern city of Diyarbakir, which is widely seen as the unofficial capital of Turkey’s Kurds. Kisanak is among thousands of political activists who served time in Diyarbakir prison after the Turkish army’s coup in 1980. Like many, she was tortured for refusing to renounce her Kurdish identity. Prior to being elected mayor last year, Kisanak was a member of parliament for the pro-Kurdish People's Democracy Party.

Kisanak spoke to Al-Monitor about life as a woman in the Kurdish movement.

Al-Monitor:  How did you get drawn into politics?

Kisanak:  I was born into an Alevi Kurdish family in Elazig. My father was active in the trade union movement. We were leftists, and I grew up in an environment where politics and the Kurdish issue were discussed over breakfast, lunch and dinner. My family’s roots lie in Dersim. They belong to one of the great Alevi Kurdish tribes known as the Auchens. Like many Alevi Kurds, our branch of the family moved to Elazig before the 1938 massacres inflicted by the Turkish army. We lost many relatives and I spent much of my childhood listening to survivors’ tales of the horror and the pain of those terrible times.

Al-Monitor:  When did your actual involvement in politics begin?

Kisanak:  It began in junior high school. It was in the 1970s in a highly volatile climate. Students were politicized and polarized and as you know the violence that erupted between these two sides culminated in the 1980 coup. I took part in many student marches. We used to talk about revolution and raise the question, “Would the revolution automatically fix the Kurdish problem or was a separate struggle needed?” The Kurdish struggle was our priority.

Al-Monitor:  How were you introduced to the Kurdistan Workers Party [PKK]?

Kisanak:  It was during my senior high school years at an all-girls teachers training school. Sakine Cansiz [the PKK female guerrilla who was murdered with two other Kurdish female activists in Paris in 2012] came to us and began telling us about the Kurdish cause and how we needed to organize. The PKK had not yet been officially formed but Abdullah Ocalan [the imprisoned PKK leader] had started to plan a strategy for the Kurdish nationalist movement. The PKK’s co-founders included like-minded Turkish revolutionaries as well. Sakine was also an Alevi Kurd from Dersim. She was incredibly practical and dynamic. She left a big impression.

Al-Monitor:  How did she get away with it? Didn’t the authorities notice?

Kisanak:  Like I said, politics had penetrated schools in such a major way. Every day this or that student group would hold a rally, hand out pamphlets, you name it. So Sakine kind of went unnoticed.

Al-Monitor:  How did you end up in Diyarbakir prison?

Kisanak:  I moved to Diyarbakir in 1978 after winning a seat at the university in Diyarbakir.

Al-Monitor:  What was your major?

Kisanak:  I ended up in the Turkish studies department.

Kisanak:  No, in fact I applied to study either medicine or engineering at all the top schools but even though I was a straight A student I failed to get in. Rather than spend a gap year being idle I decided to go to Diyarbakir and study Turkish literature.

But as you can well imagine the campus was intensely politicized and I grew ever more active in the Kurdish movement. When the army seized power in 1980 I was arrested and imprisoned in the Diyarbakir military detention center.

Al-Monitor:  Diyarbakir prison was notorious for the torture and ill treatment of prisoners. Women were sexually abused, and I believe you had your share.

Kisanak:  The whole world now knows what went on there. The abuse was of barbaric proportions. People died, killed themselves. It was an inferno. There was torture around the clock. But I don't see any merit in debating Diyarbakir prison in these terms. The worst thing they did was to try to steal our honor. And if one talks about the sexual abuse then they will have succeeded. This is what they want. There is no need to go into details. It’s obvious. All the prison staff from the wardens up were male and part of the military. They tried to beat us down, to rob us of our dignity, to stamp out our Kurdishness, to crush our feminine identity. The torture was unrelenting. But we resisted.

Al-Monitor:  How could you possibly cope?

Kisanak:  The key is that we stuck together. There was a unique sense of solidarity among us. If a physically frail woman was singled out for punishment, say for speaking Kurdish, a stronger one would step forward and bear the punishment instead. We used to help each other bathe. There was no hot water. We would wash secretly in the toilet by using a small bowl that we would fill with water from the kettle. The winters were freezing cold. The summers could be unbearable because at times there were as many as 85 of us in a single cell. Sakine played a major role in keeping us together.

That’s right, Sakine Cansiz served in Diyarbakir as well. […] She was first arrested in Elazig in 1979 then she was transferred to Diyarbakir. The proof of our resilience is that unlike some of the male prisoners not a single woman broke down and became an informer. And Sakine’s contribution was paramount in this regard.

Al-Monitor:  You had a legendary run-in with Esat Oktay Yildiran, the sadistic colonel who ran Diyarbakir prison in those days. What happened?

Kisanak:  When he first arrived we were told that he would be inspecting our ward and that we needed to show him all due respect. This meant standing to attention, salute him, sing patriotic songs. Just as if we were his troops. When he showed up with a bunch of soldiers they barked orders at us to stand up. We refused. The colonel asked who was responsible for the ward. I responded that I was, whereupon he dragged me by my hair and unleashed his German shepherd, Joe, on me. The next thing I knew I was placed in solitary confinement in the room where Joe was kept. It was filthy, full of dog excrement and bones. I was held there for months.

Al-Monitor:  Your predecessor Osman Baydemir [the former mayor of Diyarbakir] established a pretty impressive shelter for stray dogs. How do you feel about that after your bad experiences with Joe?

Kisanak:  I visited the shelter and spent time with the dogs. It’s a great project and I support it.

Al-Monitor:  Did you actually touch the dogs?

Al-Monitor:  When did you get out of prison?

Al-Monitor:  Did you ever consider joining the PKK?

Kisanak:  I imagine that most Kurds will have considered going to the mountains at a certain point in their lives. It can often seem like the sole means of coping with the repression, the violence that we face. When we were in Diyarbakir prison we often talked about avenging ourselves when we got out. But when I was freed I realized that there was a different path. Our story needed to be told. The Kurds’ voices needed to be heard. I decided to study journalism in Izmir. When I graduated I started writing for various left-wing publications and eventually became the managing editor of [the pro-Kurdish] Ozgur Gundem. In fact, the newspaper’s headquarters were firebombed by the deep state on my watch.

Al-Monitor:  You are married and have a daughter. How did you manage to squeeze in motherhood?

Kisanak:  Yes, I have a 23-year-old daughter who is studying international relations in Istanbul. I pride myself on being an attentive mother but I don’t think I could have pulled this off without the support of my in-laws and my own family.

Al-Monitor:  It must be pretty hard being a woman in this part of the world, let alone the mayor of a large city that is of such symbolic significance to the Kurds.

Kisanak:  I'm rather lucky in this respect because the people of Diyarbakir know my story. But still it is very hard and patriarchy remains deeply rooted. Tribal traditions persist and Kurdish society is religiously conservative. But history shows us that adversity breeds strength and courage. Great societal upheavals can create opportunities for women. Kurdish women are no exception.

Al-Monitor:  Abdullah Ocalan, the PKK leader, is widely credited with advocating women’s rights. Your party has a women’s quota. For every male mayor there is a female co-mayor, for instance.

Kisanak:  Yes, Mr. Ocalan’s impact is undeniable. From the 1990s onward he advocated equality for women. He deconstructed patriarchy in several books. His best-known book on the topic is called “To kill a man.” Domestic violence remains a great challenge in this region. When we organize campaigns to combat violence against women we often refer to Mr. Ocalan’s thoughts on this matter. This is very helpful because it forces men to rethink their behavior. Also, as you know many women left traditional life in the village and joined the PKK. They returned as guerrilla commanders. It was very empowering for the women they left behind. As a female mayor I'm also a role model and this makes me very happy.

Al-Monitor:  It must be quite remarkable to have spent such horrible years in Diyarbakir prison only to return as mayor three decades later.

Kisanak:  It is indeed. But the will to survive is very strong. Every day in that prison was a struggle to survive. We are planning to convert Diyarbakir prison into a museum. To this end, 100,000 signatures have been collected and the Justice Ministry has agreed to evacuate the prison and relocate it to a new building that is all but completed. We are also planning to honor Sakine’s memory in some way. It’s a tall order and we continue to debate how we can do her full justice.