Kurdish women struggle for their rights as both Kurds and women in Turkey, writes Sibel Utku Bila. 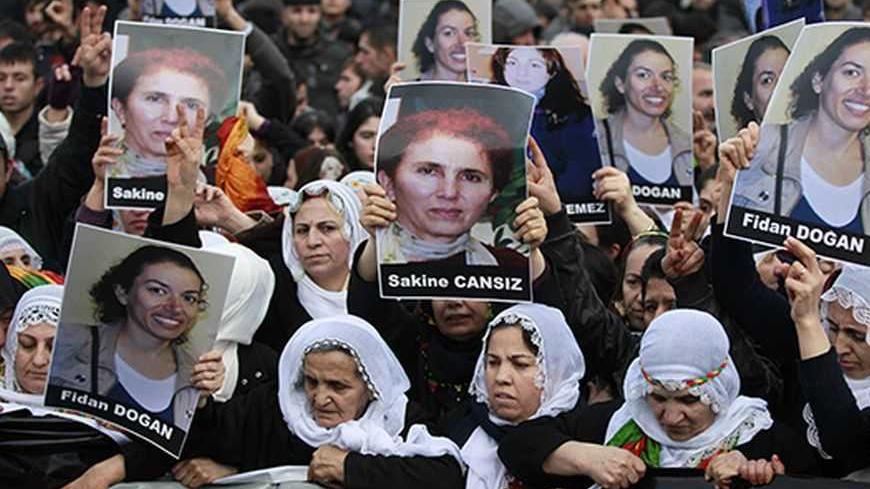 ANKARA — In 2004, a Kurdish woman was shot dead in her hospital bed in Istanbul for having had a baby out of wedlock. Her life was taken by relatives as the price of redeeming family honor. Last week, another Kurdish woman was shot dead in Paris because of her prominent role in one of the world’s bloodiest guerrilla groups. Her life was taken by unknown assassins in an apparent bid to sabotage Ankara’s fledgling efforts for peace with the rebels. Both murders have rattled Turkey in their own right, exposing the two opposite extremes that sway the lives of Kurdish women today. Some agonize in the die-hard grip of feudal traditions, while others keep pace with men at the forefront of warfare and politics.

Sakine Cansiz — a founding member of the outlawed Kurdistan Workers’ Party (PKK) who was gunned down in Paris along with two other female Kurdish activists — was a legend among Kurds for the stamina and resilience she displayed in prison torture chambers after Turkey’s 1980 military coup. She is reputed to have spat in the face of her torturers, while never breaking down. An active fighter who helped organize the PKK’s women units, Cansiz was dispatched to Europe in the 1990s, reportedly to coordinate the group’s financing, which draws on drug smuggling and human trafficking.

But for Kurdish women, the 55-year-old had significance beyond that. “Sakine was a true feminist, a true defender of women’s rights. She believed in liberal relationships and questioned authority,” said lawyer Eren Keskin, who knew Cansiz personally, in remarks to the daily Hurriyet on Jan. 14.

Guldunya Toren would have known little of such ideas when her brother shot her dead in her hospital bed in March 2004. The young Kurdish woman had survived a first attempt on her life a day earlier and was receiving treatment. The “death sentence” was passed on Guldunya after the family banished her from their village, reportedly because she refused to become the second wife of the rapist who got her pregnant. The murder exposed the Turkish authorities’ failure to protect even women at obvious risk, sparking nationwide uproar. Since then, Guldunya has become the banner of women rights campaigners in Turkey, inspiring a series of civic initiatives, songs and films.

Violence against women is rampant across Turkey, regardless of ethnic and social divides. But in the mainly Kurdish southeast, the problem is amplified by enduring feudal communities, which regard females as chattel and a collective liability to their honor. Those who trespass the rigid concepts of morality — or become “dirtied” as victims of rape — are often killed on the decision of “family councils.” Some have ended up in the grave for reasons as simple as speaking to strangers or requesting a song on the radio. In 2010, a teenage girl was buried alive for befriending boys.

When the PKK took up arms in 1984, it embraced a Marxist ideology that targeted the region's feudal system. Many women saw in the PKK a struggle not only for a national cause, but also for their own liberation. Some researchers have estimated that women accounted for up to 30 percent of PKK membership in the early 1990s, although the proportion is said to be lower now. Female militants came to notorious prominence as suicide bombers in the 1990s, often pretending to be pregnant to disguise explosives. In clashes last year, 15 women held out against the security forces for almost a day before being killed. The soldiers realized they had fought women only after they collected the corpses and removed the balaclavas that hid their faces.

“The primary reason that women join the PKK is the trauma of state oppression that almost every Kurd has suffered in this or that way. But for women, the PKK has provided also an opportunity to break the social shackles and re-create themselves as first-class subjects,” Vahap Coskun, an expert on Kurdish movements from Dicle University in Diyarbakir, the largest city of the southeast, told Al-Monitor.

And for those who choose non-violent platforms, “political activism becomes a means of taking part in public life and gaining social respect. Some have even become the subject of adoration,” Coskun said, pointing to the example of the iconic Leyla Zana.

Indeed, Zana became the face of the Kurdish political struggle in 1991 when she entered Turkey’s parliament as the first-ever Kurdish female lawmaker. She sparked an instant uproar when she spoke in Kurdish at the oath-taking ceremony. Zana later spent a decade behind bars on charges of collaborating with the PKK, blacklisted as a terrorist group by Ankara and much of the international community.

The political offspring of Kurdish nationalism strongly embrace gender equality, boasting today some of the most influential women in Turkey’s male-dominated parliament. The Peace and Democracy Party (BDP), seen by many as the PKK’s political arm, is co-chaired by a man and a woman. The current female co-chair, Gultan Kisanak, who is another survivor of the torture chambers, has proven a politician to be reckoned with. Female activism is vibrant in party grassroots and civic society, particularly in urban centers.

But not all agree that the PKK insurgency has served to empower women.

“I cannot accept that liberty and guns can go together, that true freedom can exist where people kill and get killed. A gun-wielding woman does not necessarily mean an empowered woman,” Nebahat Akkoc, the founder of the first women support center in the southeast and a leading campaigner against honor killings, told Al-Monitor from Diyarbakir.

“We are speaking here of an organization with a ruthless hierarchy and no transparency. No one really knows what is going on within,” she said.

The activist’s remarks those evoke allegations of female subservience, sexual abuse and summary executions inside the PKK that have been raised by the Turkish media, based on accounts of deserters or captured militants.

For Akkoc, genuine empowerment starts when “a woman becomes aware of the sexist system and the various forms in which it exists.” She is optimistic that campaigns to raise awareness are bearing fruit. “Our women no longer keep silent when they are subjected to violence. They speak out and share their stories,” she said. “Sometimes they face fresh violence for speaking out, but refuse to give up. This is a promising sign.”

Sibel Utku Bila is a freelance journalist based in Ankara. She has covered Turkey for 15 years.