A female Kurdish inmate who spoke up about rape, sexual harassment and torture in prison has died in solitary confinement in what the state has ruled suicide. 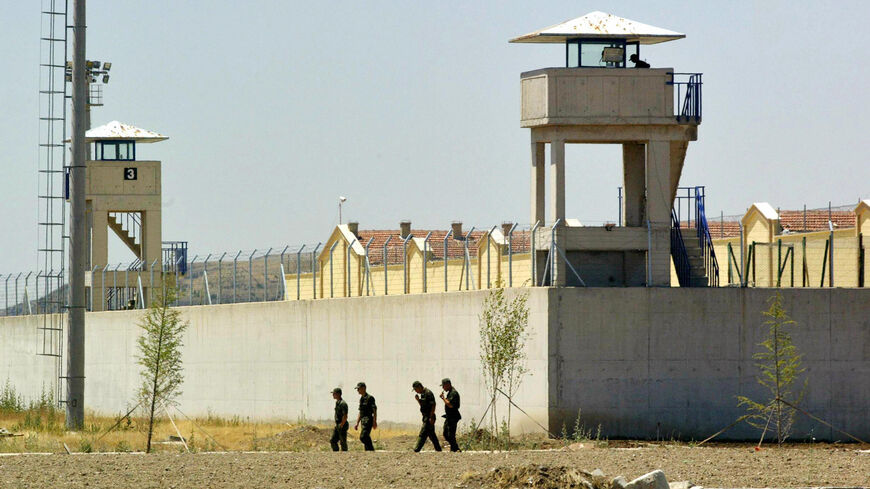 Eren Keskin, vice president of Turkey’s Human Rights Association and a prominent attorney, tweeted Dec. 9, “We just received news of our client Garibe Gezer’s suicide from prison. She was a survivor of torture.” Keskin questioned how an inmate in solitary confinement could have committed suicide and lamented that the Gezer family from Dargecit, Mardin, had already suffered so much.

Keskin’s sorrow was potent on the phone when we spoke on Dec. 15. She explained that Gezer was imprisoned in 2016 on “specious charges” as a part of sweeping arrests of hundreds of Kurds involved in politics. Gezer was not involved in any sort of militant terrorist activities. She was a “strong woman who would not bow,” Keskin commented.

Most of the charges against her were based on the testimony of a secret witness, Ayse Acar Basaran, spokesperson for the People's Democratic Party (HDP) Women’s Assembly, told Al-Monitor. The witness, codenamed Burhan, has been missing for the last five years but his unverified testimony was sufficient to send Gezer to a high-security prison for life.

The cause of her death is not clear, as the autopsy was conducted without her attorney. Even if it was suicide, Eren and other human rights observers as well as HDP politicians suspect that she was brought to the brink of death by physical and psychological torture.

Gezer was a married woman in her late 20s.

Speaking to Al-Monitor on the condition of anonymity, a former Turkish security guard who had served in different prisons in Turkey’s predominantly Kurdish southeast said that Gezer came from a family of “not good Kurds.” The retired guard explained that family names and associations are crucial for inmates jailed on political charges.

Gezer's brother Bilal was among the 46 people killed during the Kobani protests in October 2014. Hundreds of thousands of Kurds staged protests all around Turkey, particularly in Kurdish-majority southeast, against the Turkish government’s refusal to take action against the Islamic State as the massacre of Syrian Kurds loomed.

Her other brother, Mehmet Emin, was shot by police as he approached a police station to inquire about Bilal’s whereabouts. The shooters were acquitted of all charges.

Mehmet Emin lost the use of his legs after the shooting. Gezer was a district officer for the Democratic Regions Party and she was accused of working “against the unity of the state.” Her sister Asya was also jailed but released after a few months, while their younger brother Hasim, arrested in 2017, is still in jail and was not permitted to attend his sister’s funeral. Out of 11 siblings, nine of them have been prosecuted for political crimes, making the Gezers “a bad Kurdish family” in the eyes of the Turkish criminal system.

Derya Ren, a correspondent for the all-female news agency JinNews, told Al-Monitor, “I have been following Garibe’s case for years now and I just attended her funeral.” Ren explained that Gezer's sole desire was to be a part of society where women were treated equally. “In five and a half years she was shuffled around seven different prisons. She wanted to continue her education despite all the roadblocks. She wrote tirelessly about the rights violations against herself and others and she wanted their voices to be heard. She wanted the degrading and violent treatment to be known.”

Gezer repeatedly reported rape, torture and other mistreatment by the guards as well as prison doctors. In October, her attorney filed a complaint against prison officials. She later told Al-Monitor Gezer's testimony was not even taken after the formal complaint.

HDP lawmakers also filed parliamentary questions in November that went unanswered. HDP lawmaker Omer Faruk Gergerlioglu, who is also a medical doctor, said if Gezer's voice had been heard she could be alive today.

The Turkish prison system can be quite confusing. Al-Monitor's retired guard source revealed, “For Kurdish political prisoners, there are three categories: collaborators, independents and wonks. Collaborators confess their crimes, accept the guilt, sometimes even become secret witnesses. They are treated better. Wonks are well-known politicians, their aids and the quiet ones [who don't make waves]. Independents are the real hard-headed ones, and they are called independent so they can be isolated. Garibe pleaded with the guards to be put in a cell with her mates saying she is not an independent, but it is not possible. We know women like her can motivate others and cause trouble for us."

Independents are systematically isolated. One method is a notorious foam-padded cell, which Basaran explained is a very small room — one person barely fits — with no windows, covered in a horrible-smelling foam meant to prevent inmates from hurting themselves. Solitary confinement can be a prison cell with some furniture and basic facilities, or a small room with no furnishings at all.

Human rights organizations say that long-term solitary confinement is inhumane and harms the mental and physical health of inmates. Gezer was subjected to seclusion for at least 33 days.

As Gezer's suspicious death was being discussed, her body was brought to Mardin where a mayor — a trustee appointed by the government who replaced the democratically elected politician — did not provide a hearse, saying the remains belonged to an “objectionable” person.

Even the mourning process was controlled by the government. Ren, who was present at the funeral, told Al-Monitor the police would only allow 30 members of her family and friends to attend. They were regularly told not to chant, sing or shout out any slogans.

Al-Monitor's Amberin Zaman reported in April 2020 about the state’s efforts to dehumanize Kurdish rebels even after death. Political prisoners are subjected to this treatment as well.

The pro-government daily Yeni Akit, meanwhile, reported Gezer's death under the headline, “Another terrorist being fed in prison is dead.” The provocative reporting was met with dozens of comments cheering her death and calling for more. Most other Turkish newspapers and politicians simply ignored Gezer's death, her experiences in prison and her struggle to be heard.

Serhat Tutkal, a political scientist from Universidad Nacional de Colombia in Bogotá told Al-Monitor, “A major reason for this silence is the dehumanization of Kurdish people in Turkey. As we know from various cases, dehumanization can legitimize systemic violence toward people who are considered less than human. Kurdish people and members of pro-Kurdish political organizations (legal or illegal) have been subject to dehumanization since the early years of the Turkish Republic.” Tutkal added, “Kurds have been considered less-than human for a long time in Turkey and this results in the normalization and naturalization of acts of state violence toward Kurdish people, making their lives worthless compared to the ones whose human status is not in dispute. We saw similar cases in which dead bodies of Kurdish combatants were mutilated and images of these bodies were disseminated on social media platforms such as Twitter. This was a way of showing that the Kurdish bodies were not protected by law nor by customs, which means that they should not be treated with respect.”

Gezer is a symptom of the rotten system that the state established to break the solidarity of the Kurdish political movement. Tutkal explained, “In Turkey, the concept of unjust state violence is relatively new for a big portion of society. That is why all acts of violence committed by state forces can be legitimized with relative ease. This happens with university students, women protesters or members of any opposition group.” Tutkal emphasized what quite a few intellectuals would agree on: that if the state came for you there must be a reason. “That is why cases of prison torture are rarely problematized in the mainstream media, because they are about criminals."

by Murielle KASPRZAK and Joseph SCHMID | AFP | May 26, 2022
END_OF_DOCUMENT_TOKEN_TO_BE_REPLACED