What’s going on in Turkey’s prisons?

Hunger strikes in Turkish prisons, joined briefly by the country’s top Kurdish politician, aim to draw attention to mounting allegations of ill-treatment and other violations of inmate rights since last year’s coup attempt. 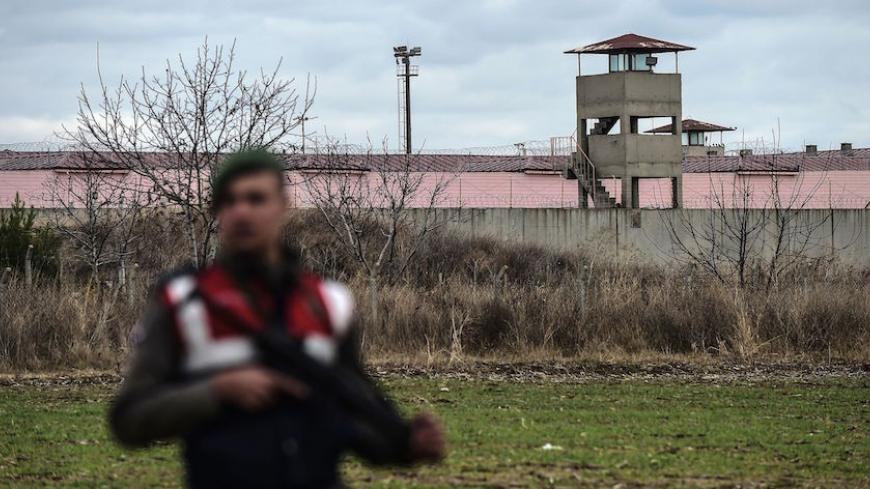 A Turkish Gendarmerie (Jandarma) officer stands guard outside the Erdine Prison (background) after a delegation from the Party of European Socialists (PES) visited the leader of the pro-Kurdish Peoples' Democratic Party (HDP) Party, Selahattin Demirtas, imprisoned in Edirne, on Nov. 21, 2016. - GETTY/Yasin Akgul

DIYARBAKIR, Turkey — Myriad allegations of rights violations in Turkish prisons have marked the aftermath of last year’s coup attempt as thousands of suspected putschists, political dissidents and journalists landed behind bars. In December, a senior UN official said torture seemed to have been “widespread” in the days after the coup attempt, while reports of ill-treatment have continued to date, including overcrowded wards and denial of medical care and sufficient food.

The story of the overcoat of Cumhuriyet and Al-Monitor columnist Kadri Gursel — detained in late October and still awaiting charges — has made headlines both in the Turkish and foreign media. To help her husband keep warm, Gursel’s wife had to buy several coats before getting the right one as prison authorities rejected coats because of their color, hood or button shapes. Another prominent journalist, Ahmet Sik, was kept in solitary confinement and denied drinkable water for three days, according to his lawyer.

Similar accounts are coming from lawyers and relatives across the country. In Diyarbakir, the largest city of the mainly Kurdish southeast, a man who has a brother in jail told Al-Monitor that the prison authorities barred visitors who wore green or navy clothes, supposedly to tell them apart from prison guards and soldiers. “There was that visitor with a green shirt and they had him take it off and go see his relative half-naked in the middle of the winter. I myself was not allowed to wear a navy coat,” the man said on condition of anonymity. Taking books to inmates is also a problem, he added.

Inmates have complained of strip searches, arbitrary restrictions on the time they can spend in common areas, deliberate cuts of heating and hot water, applications to prison authorities left unanswered, bad and insufficient food, overpriced and out-of-date food at prison canteens, denial of treatment to those who fall sick of that very food and denial of medical care in general.

On March 31, Sezgin Tanrikulu, a deputy for the main opposition Republican People’s Party (CHP), brought up a harrowing allegation about a pregnant woman who was detained in Ankara and left to deliver her baby alone in the police station. In a written parliamentary question to the prime minister, seen by Al-Monitor, he demanded information on “reports that the woman gave birth alone, shouting and screaming in pain, without any doctor or nurse present and without even water to clean up, that people held in the adjacent room heard the screams that echoed in the police station throughout the night, that the police officers cared nothing … and took the woman to a doctor only after she gave birth alone.”

The same day, another CHP deputy, Baris Yarkadas, drew attention to two other examples from what he said was “an explosion” of human rights violations in jails. Citing information from inmate families who had contacted him for help, Yarkadas said a prosecutor with both his wrists broken is held in solitary confinement in a jail near Ankara, with prison management ignoring requests to give him a cellmate who could help with his daily needs. In Istanbul, meanwhile, a woman has been incarcerated with her 8-month-old child, and the prison authorities refuse to accept even toys for the baby, he said.

It was in this atmosphere that dozens of Kurdish inmates, charged or convicted for links with the outlawed Kurdistan Workers Party (PKK), launched a hunger strike in six prisons across the country in February to protest oppression and unlawful practices by the prison authorities. Yet little seemed to change, and on March 30, top Kurdish politicians announced they were joining the hunger strike. Among them was Selahattin Demirtas, the co-chair of the Peoples’ Democratic Party (HDP), who has been behind bars since November, along with about a dozen other HDP members of parliament.

In a joint statement from a high-security prison in the northwestern province of Edirne, Demirtas and HDP lawmaker Abdullah Zeydan said they were protesting the “inhumane practices” of the prison authorities and their “complete lack of good intention” to end the hunger strikes. This was the highest-profile outcry from the prisons so far, and it seemed to work surprisingly fast. The following day, Demirtas announced the hunger strike at the Edirne prison had ended after the prison administration agreed to engage in dialogue to resolve the problems.

Yet the hunger strikes in other jails are continuing. The day the strike in the Edirne prison ended, inmates in a jail in Hatay announced they were launching one. About 85 prisoners in four jails remain on hunger strike.

Ahmet Ozmen, the head of the Diyarbakir Bar Association, said political prisoners were the main victims of rights violations and urged the authorities to take steps to end the hunger strikes.

He told Al-Monitor the prisons had become overcrowded in the massive crackdown after the coup attempt. Ankara has blamed the putsch on followers of US-based cleric Fethullah Gulen, calling them the Fethullah Gulen Terrorist Organization (FETO), but the crackdown has engulfed government opponents of all stripes.

“A prison for 750 people, for instance, is holding about 1,700 inmates. Up to eight people stay in cells for three or four inmates, with mattresses thrown on the floor or bunk beds crammed into tiny rooms,” Ozmen said, adding that the most common complaints were limited availability of hot water and bad and too little food.

He drew attention to a legislative decree issued by the government after the putsch, which requires a prison official to be present at FETO suspects’ meetings with their relatives and lawyers, in addition to audio and visual recordings of those meetings. Some prisons have extended the practice to all inmates, and cameras are now a “standard fixture” in their meeting rooms, Ozmen said.

This amounts to “an eradication of the right to defense,” he lamented. “The problem of overcrowding must be resolved in the shortest possible time, and the privacy of lawyer-client meetings must be ensured.”