Keen to draw the Kurds to its side ahead of a key election do-over, Ankara allowed jailed Kurdistan Workers Party leader Abdullah Ocalan to see his lawyers in early May, but thousands of inmates still refuse to end their hunger strike. 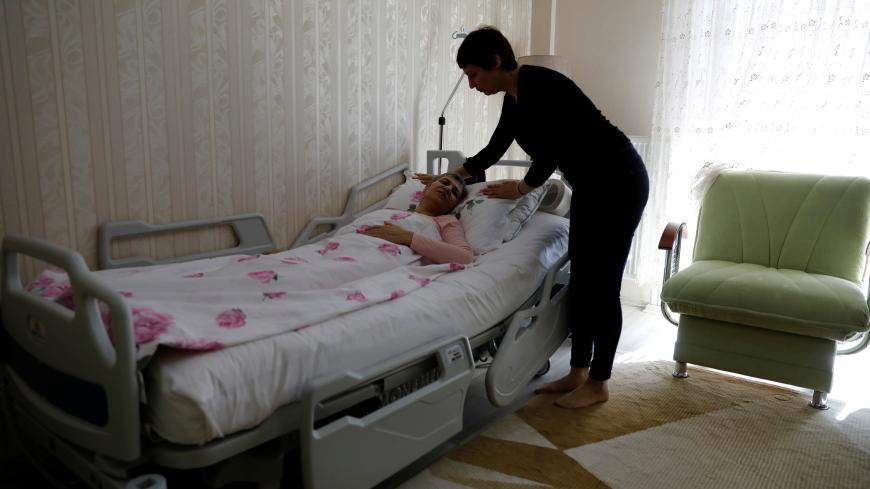 Sabiha Temizkan, daughter of pro-Kurdish Democratic People's Party (HDP) lawmaker Leyla Guven, who has been on a hunger strike for more than four months, adjusts her mother's pillow at their home, Diyarbakir, Turkey, March 20, 2019. - REUTERS/Umit Bektas

A mass hunger strike in Turkey has entered a critical stage. Despite a recent gesture by Ankara, the strikers, mostly Kurdish inmates, have refused to end the protest launched to denounce the isolation of Abdullah Ocalan, the jailed leader of the outlawed Kurdistan Workers Party (PKK).

Thousands of prisoners have joined the hunger strike since early November, when the first striker — Leyla Guven, a lawmaker for the pro-Kurdish Peoples’ Democracy Party (HDP) — began the protest while in prison. Guven has continued her hunger strike at home since her conditional release in late January. Three other lawmakers are among about 60 people who have joined the hunger strike outside prison, while the overwhelming majority — estimated between 3,000 and 5,000 people — are behind bars, including 15 inmates who announced their protest would continue to their deaths if necessary at the end of April.

On May 2, Ankara allowed two of Ocalan’s lawyers to see him on the prison island of Imrali, where the PKK leader has been serving a life sentence since 1999. It was the first such meeting in eight years that saw the rejection of no less than 810 requests. Ocalan’s relatives have faced similar restrictions. His brother was allowed to visit him in January after two and a half years.

In a message relayed by the attorneys, Ocalan urged the hunger strikers not to take their actions to a point that threatens their health or results in death. But the strike did not end, with many convinced that one meeting does not mean an end to Ocalan’s isolation. A second group of 15 inmates declared their protest a “death fast” on May 10. So far, the protest has claimed eight lives, including seven people in prison and another who committed self-immolation in Germany.

The hunger strike — largely ignored in the highly charged climate ahead of the March 31 local polls — drew public attention only after anxious mothers of hunger strikers faced off with heavy-handed police outside prisons. Images of truncheon-wielding police pushing and manhandling women wearing symbolic white veils called “tulbent” raised a degree of public awareness. The tulbent, which symbolizes peace, has become increasingly visible at political demonstrations in Turkey in recent years. According to tradition, a brawl must immediately stop once a woman throws her tulbent to the ground. Those who refuse to stop are seen with contempt, even more so if they hit a woman.

Though the HDP had not called for a hunger strike, it had to shoulder the process once Guven spearheaded the move. The HDP building in Diyarbakir, the largest city of the Kurdish-majority southeast, has become one of the focal points of the protest and a target of frequent police raids. HDP lawmakers Dersim Dag, Tayip Temel and Murat Sarisac have been waging their hunger strike inside the building since March 3.

A group of mothers took their protest to parliament May 14, attending the HDP’s parliamentary group meeting. The 21 women refused to leave parliament after the meeting, requesting to see Justice Minister Abdulhamit Gul and parliament speaker Mustafa Sentop. While the justice minister did not respond, Sentop met with three representatives of the group and promised to speak to Gul. Later in the day, two HDP deputies briefly occupied the parliament’s rostrum after an HDP motion for a probe into rights violations in prisons was voted down.

On May 16, Gul said, “The decisions regarding visit bans have been lifted and visits [to Ocalan] have become possible.”

Ocalan attorney Newroz Uysal commented the legal team had been notified of the decision on April 22 and yet only one visit had taken place so far. “This announcement is nothing new, but the fact that the minister himself has revealed it is important for the hunger strikers,” she said.

The Asrin Law Office, which represents Ocalan, also suggested that the isolation of its client has not been thoroughly lifted, saying that Ocalan’s relatives have been denied permissions to visit him on the grounds of a new disciplinary penalty dated April 22.

According to HDP lawmaker Ayse Acar Basaran, “The hunger strikers demand an end to [Ocalan’s] isolation and a guarantee that visits to Ocalan will continue. The state has not taken any step or provided any assurances to that effect so far,” she told Al-Monitor.

Basaran described the demands as “constitutional” and stressed that the restrictions are “political” and did not stem from any law. “The hunger strikers are in a critical stage. The families want [a solution] before they begin to die,” she said.

The Kurdistan Communities Union, an umbrella group involving the PKK, appeared to back the continuation of the hunger strike when it said in a statement May 7 that Ankara allowed the lawyers to visit Ocalan “only to lift the pressure of the domestic and international public and weaken the resistance.”

A similar hunger strike in 2012 was ended upon an appeal by Ocalan, which came after state officials met with the PKK leader in prison.

Ocalan’s latest statement from prison was made public on the same day the election authorities voided the opposition’s win in the Istanbul mayoral race. Kurdish support was decisive in the razor-thin victory of Ekrem Imamoglu, the candidate of the main opposition Republican People’s Party. Now, with a do-over scheduled for June 23, the government has been signaling its desire to rebuild bridges with the Kurds and dissuade them from backing Imamoglu again.

“We believe this should not be seen as an election issue,” Basaran said. “If coffins begin to come out of prisons, it could trigger [public] outrage. After all, those people are raising a legal demand. Responding positively is important for Turkey’s future and democracy.”

The timing of the hunger strike has been controversial, as similar actions in the past have been detrimental to the Kurdish movement. Many have disapproved of the HDP investing efforts in an Ocalan-centered agenda in the midst of an election season in which the government vilified its opponents as “terrorists” and portrayed the elections as “a matter of survival” for the nation. According to critics, such actions play into the hands of the government as it seeks to equate the HDP with the PKK and undermine unity among the opposition by claiming links between the CHP and the PKK. Because of such concerns, the hunger strikers have received neither support nor criticism from civil society this time.

Those who back the hunger strike, on the other hand, point to the grave ramifications of the lack of a solution to the Kurdish issue. Temel, the hunger-striking HDP deputy, for instance, argues the Kurds have faced “a terrible oppression campaign” since Ocalan’s isolation began. “Hence, Ocalan’s isolation is, in fact, the refined state of the Kurdish question,” he says. “Ocalan has a mindset that produces solution proposals. The lifting of his isolation could enable a way out from the current dead end.”

After the collapse of settlement talks with the Kurds in 2015, Ankara mounted a ferocious crackdown on Kurdish militancy in urban areas, destroying whole neighborhoods and towns, seized dozens of Kurdish-run municipalities in the southeast and imprisoned hundreds of Kurdish politicians and activists, paralyzing the HDP. Yet its once-successful strategy of consolidating the nationalist and conservative vote backfired in the March 31 polls. The Kurds rallied behind opposition candidates, proving a critical factor in the government’s losses of Turkey’s main urban centers.

Now, by lifting Ocalan’s isolation — a one-off affair so far — the government is seeking to impress the Kurds ahead of the new vote in Istanbul. The move aims to prevent the hunger strike from reaching a fatal stage while opening a dialogue channel with Ocalan to try to steer the Syrian Kurds into the direction it wants. There have been claims that Turkish intelligence officials recently met with the Syrian Kurds. In his message, Ocalan said, “All parties should strive to resolve outstanding issues in Syria by shunning the culture of conflict and embracing constitutionally enshrined local democracy within the framework of a united Syria,” and stressed that “Turkey’s sensibilities” should be taken into account.

Still, judging by the mood and assessments in Kurdish quarters, such government tactics can hardly entice the alienated and downtrodden Kurds without a profound policy change. This goes not only for Turkey’s Kurds, but for their Syrian cousins as well.