Jailed Kurdistan Workers Party leader Abdullah Ocalan was banned from all outside contact reportedly for “chatting with his fellow inmates.” 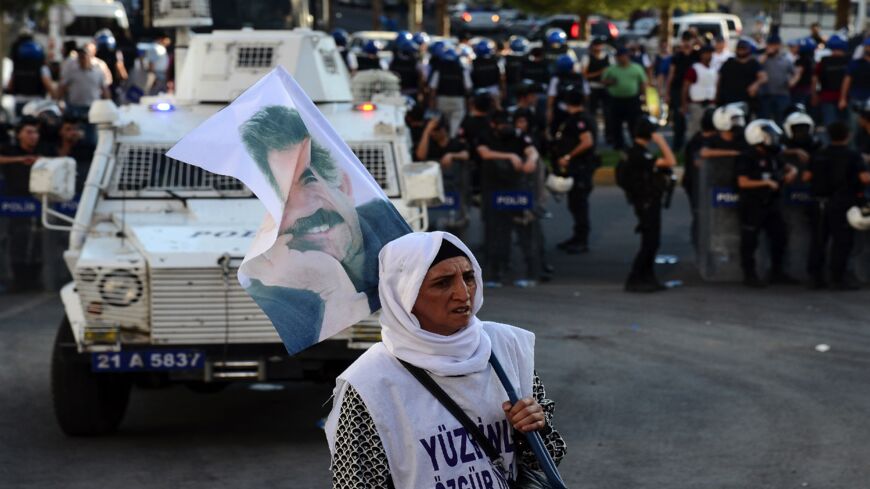 A woman holds a flag of jailed Kurdish leader Abdullah Ocalan as she stands opposite Turkish riot police in Diyarbakir on Aug. 1, 2015, during a demonstration against Ocalan's social isolation and restrictions on communication with members of his family and lawyers. - ILYAS AKENGIN/AFP via Getty Images

Turkish authorities have prevented jailed Kurdish leader Abdullah Ocalan from seeing his lawyers and family members for the past two years on the grounds of consecutive “disciplinary punishments.” Ocalan, who since 1999 has been serving a life sentence at the Imrali prison island off the coast of Istanbul, was most recently barred from outside contact reportedly because he chatted with his fellow inmates during the physical exercise period. According to Kurdish politicians, the ban reflects Turkish President Recep Tayyip Erdogan’s drift away from the democratic process, which aimed to solve Turkey’s decadeslong Kurdish problem via peaceful means.

Ocalan’s isolation has come into public focus following the Council of Europe’s Committee of Ministers meeting on Dec. 2, during which the European human rights watchdog decided to initiate infringement proceedings against Turkey over the detention for over four years of Turkish philanthropist Osman Kavala. During the meeting, the European body also asked Ankara for information on what steps were taken to put into place a mechanism to review life sentences in Turkey. In 2014, the European Court of Human Rights ruled that sentences of life imprisonment without a chance for parole should not be turned into a torture mechanism, calling on Ankara to put into place a review mechanism for convicts serving lifelong sentences.

“Turkey should immediately do something on this issue," Ibrahim Bilmez, one of Ocalan’s lawyers, told Al-Monitor, pointing out the January 2022 deadline set by the Council of Europe for Turkey to respond the information request.

While Ocalan's release from prison appears out of question for now, his treatment there continues to draw criticism and his family members worry about his well being.

The Imrali prison island where Ocalan is serving his sentence on terror and treason charges hosted several figures — from pro-Kurdish Peoples’ Democratic Party (HDP) lawmakers to high-level bureaucrats — until 2014 when peace talks between Ankara and the Kurdistan Workers Party (PKK) collapsed.

Ocalan’s lawyers were granted access to him for the first time in several years in 2019 following a mass hunger strike involving thousands of people, from HDP officials to inmates in Turkish prisons. Ocalan was allowed to ​​hold five separate meetings with his lawyers and a meeting with his brother. In a statement he relayed through his lawyers, Ocalan called on the strikers not to take their actions to a point that threatened their health or resulted in death.

Yet, following these meetings, isolation resumed and Ocalan was once again banned from meeting with his lawyers, relatives and fellow inmates on the prison island. The only exception to the ban was a three-minute phone call he made on March 3, 2020.

Since then, no one has spoken to or met with Ocalan. Bilmez said their latest request to visit him last week was declined by the Justice Ministry on the grounds of a “disciplinary punishment” he received in October.

“According to this punishment, he was banned from both lawyer and family visits. We have been constantly facing disciplinary punishments over the past two years,” Bilmez said.

Ocalan’s fellow convicts on the prison island face similar treatment. Omer Hayri Konar, who is serving a life sentence, is one of them. His brother, Emin, said he had last seen Omer two years ago.

“When we submitted a [visit] request with lawyers, we coincidentally learned that they had received disciplinary punishment,” Emin said, referring to his brother and three other inmates including Ocalan. According to Emin, the reason for the punishment was inmates chatting with each other during physical exercise.

Many believe the reasoning behind the bans on visits is far from convincing.

Meanwhile, some international rights groups continue to call on Ankara to improve Ocalan’s treatment. Last year, ​​the European Committee for the Prevention of Torture (CPT) said the restrictions on Ocalan and other convicts’ meetings with their lawyers and family members were “unacceptable.” In a report published after a CPT delegation’s visit to the prison in 2019, the CPT called on Ankara to ease the solitary confinement measures placed on Ocalan and grant him more ​​outside contact.

Emin Konar and Omer Ocalan, the Kurdish leader’s nephew and an HDP lawmaker, held a joint press conference at parliament in Ankara last week, calling on the Justice Ministry to lift the ban on visits, but to no avail.

According to Omer Ocalan, the government has suspended all laws regarding prisoners' rights at the Imrali prison island and this lawlessness was extended to the outside of prison, becoming a common government practice against Kurdish movement.

Bilmez is calling on all civic groups to speak up against the situation. He and Ocalan’s other lawyers last week submitted a request to the Bar Association in Diyarbakir, the largest city in the Kurdish-majority southeast, to take action to end Ocalan’s isolation.

Diyarbakir Bar Association chair Nahit Eren said inmates’ rights to meet their family members and lawyers are guaranteed under international law. Pointing out relatives’ concerns about the inmates’ well being, Eren said the Justice Ministry needs to immediately grant access to Imrali. He said an official request by the Bar Association for access has gone unanswered.

Unheeded calls by numerous international and local bodies and civic groups indicate that the situation is an outcome of political preferences rather than legal technicalities.

Tayip Temel, HDP deputy co-chair, concurs. “The major reason for the isolation is Erdogan’s drift away from the democratic settlement perspective,” he told Al-Monitor. He said that whenever the government drifts away from democratic means to settle the Kurdish problem, Ocalan’s isolation grows.