Why did Turkey allow jailed Kurdish leader to meet lawyers after long pause?

In his first meeting with lawyers in eight years, imprisoned Kurdistan Workers Party leader Abdullah Ocalan called for "democratic negotiation" between Turkey and the Syrian Kurds and for hunger strikers protesting his treatment not to endanger their health. 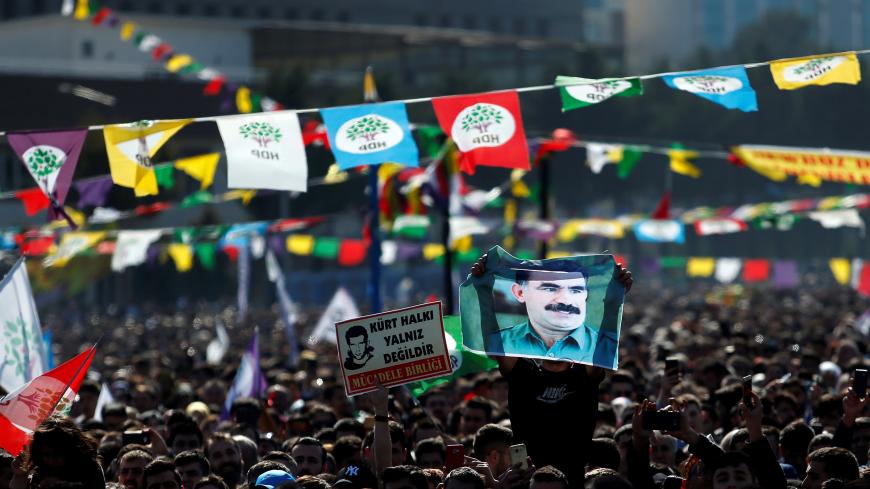 Abdullah Ocalan, the imprisoned leader of the outlawed Kurdistan Workers Party (PKK), has called on US-backed Syrian Democratic Forces (SDF) to refrain from conflict with Turkey and to take what he termed Turkey’s sensibilities into account. The 70-year-old guerrilla boss relayed his appeal through his lawyers after they were granted access to him for the first time in eight years.

The Turkish authorities' decision to end his isolation has spurred speculation of a possible resumption of peace talks that would include a deal on Syria. Others say it's part of President Recep Tayyip Erdogan’s plan to ditch his nationalist partners and win Kurdish support, which proved critical to the opposition’s victory, before a rerun of municipal elections in Istanbul. Turkey’s Supreme Electoral Commission ruled in favor of Erdogan’s demands for fresh elections today.

But the immediate goal appeared to be to leverage Ocalan’s uncontested leadership over the PKK to persuade thousands of prisoners who are on an extended hunger strike in protest of his isolation to end their fast.

In a statement that was shared by his lawyers at a news conference today, Ocalan called for "democratic negotiation" between Turkey and the Kurds and the use of soft power instead of “tools of physical violence.” He said, “We believe that though the Syrian Democratic Forces, all parties should strive to resolve outstanding issues in Syria by shunning the culture of conflict and embracing constitutionally enshrined local democracy within the framework of a united Syria.”

Ocalan also called on the hunger strikers not to take their actions to a point that threatens their health or results in death. Turkey’s Human Rights Association said in an April 22 report that at least 3,000 prisoners in 92 prisons across Turkey were on hunger strike.

Seven of them took their own lives in March within the space of a single week. Another by the name of Ugur Sakar killed himself in Germany on Feb. 21, in a morbid manifestation of the cultish devotion Ocalan continues to inspire some 20 years since being sentenced to lifelong imprisonment on Imrali Island on terror and treason charges.

Ibrahim Bilmez was among the four lawyers who applied to visit Ocalan but did not make it to the island. He said, “We believe the government finally granted us access to our client after refusing to do so 810 times because of its fear of the hunger strikes. Thousands of lives are at risk.” Bilmez told Al-Monitor worries over a public backlash were evident in the authorities’ hasty burials of the seven inmates who had died so far. “Their remains were spirited away in the late night hours and only immediate family members were permitted to attend their interment.”

Bilmez added that it was premature to conclude that the visit amounted to a reversal of the government’s harsh repression of the Kurdish political movement, which has seen thousands of people, including democratically elected lawmakers and mayors, locked up on scantily evidenced terror charges. The justice minister has not responded to lawyers’ and Ocalan’s brother Mehmet’s subsequent request to meet with the PKK leader in the wake of the May 2 visit. “It may be a one-off thing, and if so the hunger strikers may decide to continue their strike. The ball is squarely in the government’s court,” Giran Ozcan, the Washington representative of the Peoples’ Democratic Party, the third largest bloc in the Turkish parliament, told Al-Monitor.

But sources with close knowledge of the Turkish government’s Kurdish dossier asserted that the prison assignation was intimately linked to a broader effort to stitch together a deal with the PKK on northern Syria, where its US-backed affiliate and backbone of the SDF known as the People Protection Units (YPG) holds sway. One of the sources who spoke to Al-Monitor on condition of strict anonymity because of the sensitive nature of the topic claimed that officials from Turkey’s national spy agency, MIT, had recently met with SDF commander Mazlum Kobane, a close associate of Ocalan in northern Syria.

“The first meeting took place 10 days ago, then another last week, and after meeting Sahin, they met with Ocalan on the island and then again with Sahin,” the source said, using Kobane’s real name of Ferhat Abdi Sahin. He is also known as Sahin Cilo from his years in the PKK. The source went on, “The meetings started a month ago through the United States’ mediation. Of course they will all deny it for now. And the prison visit is not related to the elections. The Kurds will continue to support the opposition in any Istanbul re-run.”

SDF officials could not be reached for comment. But if such talks did occur, they would not be a first. Kobane told Al-Monitor in a March interview that he had met with MIT officials in Syria when peace talks between Ocalan and the Turkish government were still ongoing.

Kobane confirmed last week at a public forum that “indirect talks” were taking place between Turkey and the SDF “through intermediaries.” The United States’ envoy for Syria, Jim Jeffrey, has been seeking to strike a deal between Ankara and Kobane for a proposed safe zone, shuttling between Turkey and northeastern Syria since last year.

Jeffrey was in Turkey the day that Ocalan met with his lawyers. But Kobane has said a deal could only be reached if Turkey were to pull its forces out of the mainly Kurdish enclave of Afrin, where the PKK-linked Afrin Liberation Forces have sharply escalated their attacks against the Turkish military and its Arab rebel allies in recent weeks.

But with Turkey sticking to its demands that its forces monitor the safe zone extending up to 40 kilometers (25 miles) deep into the Kurdish-controlled zone and the YPG rejecting any arrangement involving a Turkish presence, little progress has reportedly been made.

A second source with intimate knowledge of the talks contended, however, that a compromise formula that Kobane has allegedly not ruled out is purging YPG-linked military and local council members in the mainly Arab town of Tell Abyad with Turkish vetting much, in the same way they were in Manbij. But the real test of any progress, Ozcan said, will be whether Ocalan is allowed to continue to communicate with his lawyers and the outside world.