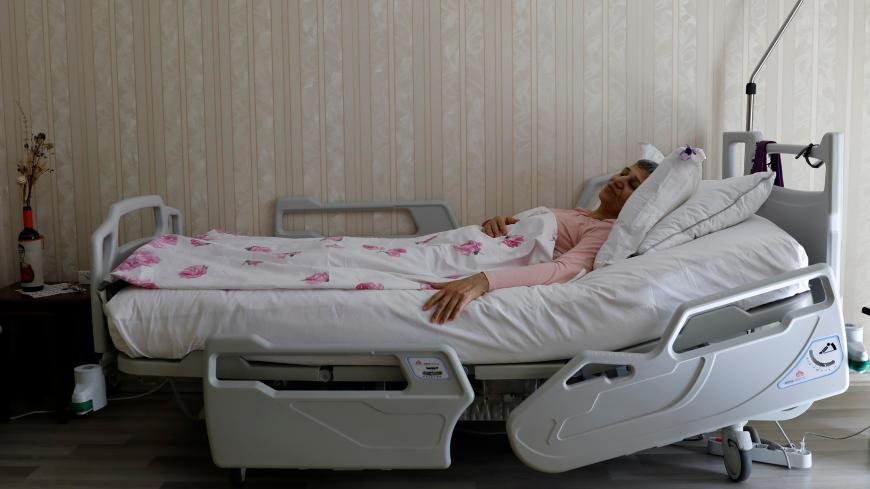 Leyla Guven, a lawmaker from the pro-Kurdish Peoples' Democratic Party (HDP) who has been on a hunger strike, rests in her bed at her home in Diyarbakir, Turkey, March 20, 2019. - Reuters/Umit Bektas

Abdullah Ocalan, the imprisoned leader of the outlawed Kurdistan Workers Party (PKK), was granted access to his lawyers today in the first such meeting since May 2 and the second in eight years, amid signs that Ankara is easing his isolation.

Lawyers Nevroz Uysal and Rezan Sarica returned from the island prison of Imrali, where Ocalan has been held since 1999, following his treason conviction.

But Ibrahim Bilmez, a member of Ocalan’s vast legal team, said what had been discussed is still under wraps. “It may take one or two days for us to share this information,” Bilmez told Al-Monitor.

The government’s decision to end Ocalan’s communications embargo has sparked widespread debate about its possible motives. One is that the ruling Justice and Development Party (AKP) is seeking to woo back Kurds who voted in favor of the opposition in the March 31 local elections, helping it grab many of Turkey’s largest cities, including Istanbul. A do-over election for Istanbul is to be held on June 23, after the country’s top electoral commission upheld the AKP's claims of irregularities. Around two million of Istanbul’s 15 million-strong population are believed to be Kurds.

The controversial decision was announced on May 6. The same day, his lawyers shared a message Ocalan composed during the May 2 meeting. He made no mention of the elections.

Instead, Ocalan appealed to more than 3,000 hunger strikers protesting his internment conditions to not endanger their lives. But the strikes continue and “the situation is getting critical,” said Bilmez. “My personal opinion is that the government is above all concerned with getting our client to use his influence to help end the strikes.” Should they result in death, Bilmez warned, it would fuel nationwide unrest and add to instability as the country grapples with its worst financial crisis in recent years.

Leyla Guven, a lawmaker for the pro-Kurdish People's Democratic Party who spearheaded the hunger strikes, is on her 196th day of refusing solid food.

Some 30 Ocalan supporters are refusing all forms of nutrition and medical intervention until their conditions are met. Over time, such actions can trigger Wernicke Korsakoff syndrome, a brain disorder that is caused by a vitamin B1 deficiency and leads to a painful death.

The PKK has signaled that the hunger strikes will continue until Ocalan’s isolation is terminated and he is granted free and unfettered access to his family and lawyers. It could be seen as a display of loyalty in which the organization persists in advocating sacrifice despite his appeals. But it could also be the PKK’s way of messaging Ankara that it won’t cooperate unless it shows real signs of wanting to resume peace talks to end the 35-year-old Kurdish conflict.

Ocalan’s message also addressed Syria, where the PKK’s sister organization the People’s Protection Units (YPG) dominates around a third of the war-wracked country with military protection from the United States.

Ocalan did not refer to the YPG specifically but instead called on the YPG-led Syrian Democratic Forces, a coalition of Kurdish and Arab fighters, to take “Turkey’s sensitivities into account” and to steer clear from “a culture of conflict.” His words were interpreted by some as a signal to the YPG to be more yielding as the United States pursues efforts to secure agreement between Turkey and the Kurdish militants on a proposed safe zone along the Turkish-Syrian border.

Turkey has not backed down from demands that its forces monitor the zone that would stretch east of the Euphrates River on the Syrian side all the way to the Iraqi border. The United States' special envoy to Syria, Jim Jeffrey, is said to be continuing to pile pressure on the YPG to make further concessions “to stop the process from stalling,” a source familiar with the substance of the talks told Al-Monitor on condition of anonymity. Whether further exhortations from Ocalan will soften the YPG’s opposition to a Turkish presence remains to be seen.

Typically, the government vets any statements made by the 71-year-old guerrilla boss before they are made public, and at least one government official — from the national intelligence agency or the armed forces — is present when Ocalan meets with visitors.