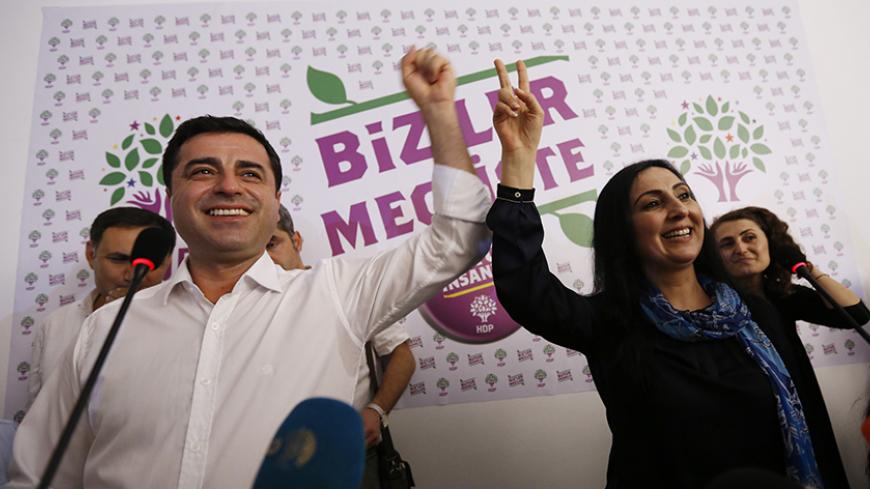 The pro-Justice and Development Party (AKP) daily Turkiye published on Aug. 13 a controversial column titled “Figen Yuksekdag and Women of Cancerous Souls.” Figen Yuksekdag is the female co-chair of the pro-Kurdish Peoples' Democratic Party (HDP). Targeting the image and reputation of Yuksekdag, the piece reinforces strong prejudices against left-wing women among the Turkish political right, particularly Islamists. It states that leftist women lose their femininity, dress tastelessly and try to act like men to be considered equal — hence their incessant rough, violence-advocating rhetoric. Trying to identify the source of this male anger, the column argues that these women suffer from ugly duckling syndrome and suppress their libido. Then the piece takes a rather insulting turn against Yuksekdag's personality and claims she is advocating violence because she has not been with a man. Twisting Yuksekdag’s own words about her personal life choices from a candid interview, the offensive column declares all leftist women are “bigoted, irrational and despotic.”

This is only the latest example of pro-AKP media attacks on female socialists; it is not an exception. Indeed, the AKP’s Ankara mayor, Melih Gokcek, is notorious for his constant verbal clashes with left-wing female parliamentarians. Deputy Prime Minister Bulent Arinc recently told a parliamentarian from the HDP to “shut up as a woman” on live television. Similarly, several times women parliamentarians from left-wing parties have become victims of physical attacks from right-wing male deputies during parliamentary sessions.

The piece — quite harsh in its language and personally offensive to Yuksekdag and women in general — generated an uproar mostly from left-wing social media users. A few left-wing women also penned articles published in non-mainstream media outlets. They questioned why the right fears women and how women-hating men act in social and political settings. So far, not a single columnist or pundit from the conservative or Islamist media outlets has criticized the piece. It is particularly telling that right-wing women have kept quiet about such horrendous and personal insults against a senior female politician, particularly in a country where female politicians are a relatively rare sight, barely reaching 14% in the 2015 general election.

Yuksekdag’s lawyers promptly filed a court complaint about the piece. That said, the arguments of the piece, aside from the personal insults targeting Yuksekdag, are a summary of the prejudices and generalizations the Turkish right holds against women of the left. Why do conservative, particularly Islamist, men despise leftist women? And why is this dislike becoming more vocal now?

Islamists, specifically the AKP, fear losing the women’s vote. Although in many Western democracies women are more left-leaning than men, in Turkey the AKP has enjoyed the support of women voters. Yet left-wing parties have been increasingly gaining momentum in Turkey, reaching almost 40% of the vote share in the last election. In addition, the HDP has brought in fresh arguments embracing women from all walks of life. All HDP party posts are shared between a man and a woman as co-chairs. Indeed, a simple comparison exposes the AKP’s fears. In the 2015 elections, only 16% of the AKP’s parliamentarians were women, while for the HDP, women parliamentarians make up 39% of the total number.

So it is all the more essential to paint a distorted, tainted and socially unacceptable image of left-wing women, which would help deter young people from associating with leftist movements. At this point, one cannot help but wonder how young socialist women feel.

Al-Monitor spoke with college-age, left-leaning women in various coffee houses in the Beyoglu district in Istanbul and the Kizilay-Sakarya neighborhood of Ankara. Both of these locations are known as left-wing hangouts. Unlike young Islamist men in hookah cafes, socialist women are timid, in general. They were quite suspicious of an outsider asking them questions. After talking with almost 40 women, I have concluded that they all share a feeling of betrayal and conflict. They harbor the feeling that pious women have abandoned the feminist struggle now that they have achieved headscarf freedoms. A 20-year-old student of geography, Yasemin Kaya, told Al-Monitor, “We stood by their side, yet when we are belittled by the male-dominated society our observant Muslim friends turn a blind eye to our struggle. Now it is hip to wear an expensive headscarf, which indeed may be the key to a stable marriage because they are the good girls.” So then, are the left-wing women bad ones? These women are between a rock and a hard place. On one hand, the society views activist, left-wing women as easy, even lacking virtues of motherhood. On the other hand, they are blamed for an asexual outlook and hysterical behavior if they choose to not to have any men in their lives.

A 22-year-old, headscarf-wearing feminist studying at Middle East Technical University, giving only her first name as Aysenur, told Al-Monitor, “We have to choose either to look pretty and be called a slut, or to look plain and dull, being labeled a lesbian or asexual destined to be an old maid. Either way, you are an outcast. To be a left-wing activist in Turkey means you are a minority; to be a left-wing woman activist means you are the bottom of the totem pole and you are vulnerable to attacks from everyone, particularly from Islamist men. I am a socialist but a pious Muslim, because the quest for freedom does not end with this piece of clothing," she said, referring to her headscarf.

These and other women — Alevi, Kurdish, worker, pious, socio-economically dissatisfied — are struggling to find a voice in the socialist networks. To top all that, many leftist women don’t want men from their own political outlook to defend them, which leaves them more vulnerable.

Islamist men struggle to control women in general. Hatice Altinisik, a member of the HDP’s Central Executive Council and human rights activist, and Diren Cevahir Sen, a feminist, ecologist, human rights activist and lawyer, agree that Islamist men first and foremost have a problematic approach toward women in general. Both Altinisik and Sen concur with the young leftist women that women of the left symbolize independent, self-sufficient and uncontrollable female identity. In a sense, socialist women are the nemesis of Islamist men. Altinisik told Al-Monitor, “Right-wing conservatives despise socialist women because they want women to obey them in public and private spaces. They see women as a tool for procreation and servitude. Look at the women enslaved by the Islamic State [IS]. These young girls of 8 and 9 years who are raped and sold are not communists or socialists. Yet the understanding of several far right-wing elites in Turkey is the same. Remember, even women laughing out in public was condemned by the deputy prime minister in Turkey only recently. Confident, hardworking, revolutionary and socialist women are an obstacle in their way. Plus, we work not just for socialist women’s liberation but for all women.”

Branding activist women as militant helps marginalize any opposition movement. As to the timing of these harsh words about socialist women, we also need to consider the fact that with the recent rise in terror attacks and yet another tumultuous election season approaching, the most efficient way to marginalize and dehumanize any and every opposition is to portray them as violent and militant in public opinion. As Sen told Al-Monitor, “Just as the AKP tries to criminalize the HDP, pro-AKP media outlets attempt to incriminate politically active women. Sexism, patriarchal dominance and misogyny are their ruling principles, and all require women to be invisible.”

As the Turkish public opinion grows intensely divided over who is to blame for the latest political and security uncertainties, it seems branding politically active women who refuse to fall in line with the right-wing mindset as violent is the deliberately chosen method to silence and marginalize them. Given the fact that a similar strategy worked effectively on dissident female journalists, female activists may have to be ready for even more intensified fury from Islamist men in the near future.