The number of women elected to parliament reached a new high in Turkey's June elections, but dropped in the Nov. 1 snap elections, especially in the victorious Justice and Development Party. 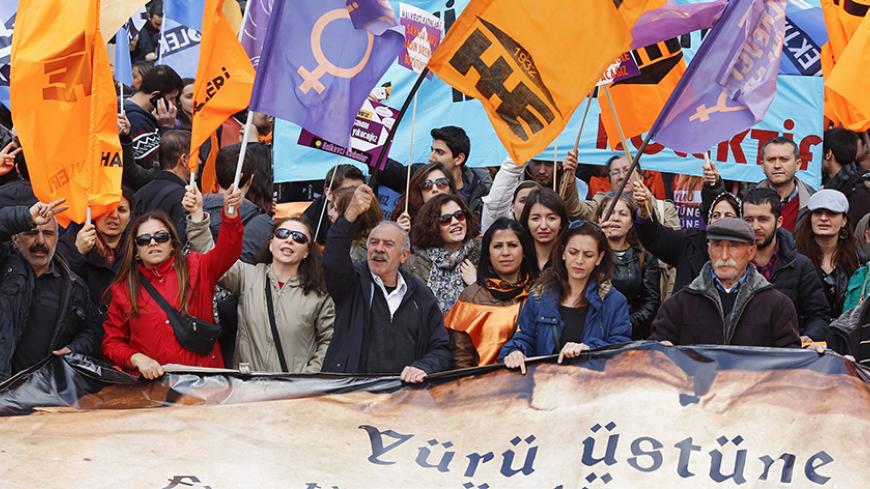 People wave flags and shout slogans during a protest against Turkey's ruling Justice and Development Party (AKP) with a banner that reads, "From now on, women will talk," Ankara, April 12, 2015. - REUTERS/Umit Bektas

Eighty-five years after Turkish law guaranteed women participation in politics, women remain significantly underrepresented in elective offices. There had been hope for change earlier this year, with many pundits expressing jubilation after the elections held June 7 raised the number of female parliamentarians to a record high 98, out of a total of 550. Although the figure represented only 18% of all members, it was viewed as a step in the right direction, generating expectations for additional increases in future election cycles.

In the snap elections held Nov. 1, after the failure of the Justice and Development Party (AKP) to form a government, the number of female parliamentarians fell to 82, or 14.9%. Hatice Kapusuz, a feminist activist with the Association for the Support of Women Candidates, had predicted such a decline prior to the vote.

In the November elections, both the pro-Kurdish Peoples’ Democratic Party (HDP) and the MHP had fewer women elected, because their share of the vote fell significantly. The Republican People’s Party (CHP) was able to preserve its vote and female representation from the June elections. The AKP, however, is another issue.

The AKP increased its vote share by 9% from June to November but nonetheless lost seven female representatives, down from 41 to 34. After the June elections, 15.9% of the AKP's parliamentarians had been women, but after the November vote, women only represented 10.7%. When asked why, a senior male AKP member who requested anonymity joked, “Apparently, the more women there were on the lists, the fewer votes we were getting, so we got rid of the dead weight. Plus, is it not the kettle calling the pot black here, given that the US Senate has about 20% female representation.”

When pressed for a serious answer, the AKP member said, “The way the candidate lists were designed in June failed to give confidence to our constituents. Perhaps they were too young, too old or too politically correct, I am not quite sure which, but we could not repeat the same mistake. We had to go over all the lists, one by one, and make sure to nominate candidates who would resonate with our base. We had to make sure our disenchanted constituents would feel welcomed back and go to the voting booth for us.”

An openly pro-AKP professor of political science from Istanbul who also requested anonymity posed the following question to Al-Monitor: “If voters are biased against female candidates, is this the AKP’s fault?” In the process of ranking candidates, the AKP deliberately reduced the number of female candidates because it did not believe they would rally constituents. Yet, prior to June, the AKP had been able to win elections when presenting more female candidates, so reducing their number to win more votes is not a satisfying explanation.

Can women conquer the macho world of Turkish politics by only being voters? In the June and November contests, the AKP’s platform claimed that the party would increase female participation in politics, but most of the section under “Women” was devoted to vague promises about educating girls, preventing early marriage and rewarding mothers, such as offering them money for each child they have, paying maternity leave and providing free child care.

Indeed, these were the only concrete promises the AKP made to women, specifically to mothers. These potential state handouts are neither sustainable nor helpful to Turkish women in the medium term given that the country suffers from increasing rates in the murder of women, cases of pedophilia (under the guise of child marriage) and sexual harassment as well as the low level of women’s financial empowerment.

Kapusuz told Al-Monitor that the situation of women in leadership positions in Turkey is a sight for sore eyes, not just in parliament, but across the board. In the last government, out of 25 ministers, only one was a woman. Unsurprisingly, she headed the Ministry of Family and Social Policy. Kapusuz said, “The critical threshold for women’s representation is 33%. We have met this criterion only in 16 provinces [out of 81]. Considering women are represented in civil society organizations at a mere 5% and in municipalities at 2.8%, the situation is quite somber. Crucial legislation addressing women’s needs is simply ignored.”

Discrimination and sexism are pervasive in Turkey, and the political arena is no exception. It is legitimate to question whether female parliamentarians care and work for women’s empowerment. It is generally assumed that the higher the number of females in legislative positions, the better the policies on women’s health, education, economics and work. It is difficult, however, to combat systemized sexism in a representative democracy when 50% of the population does not have a voice. Women’s associations, including Kapusuz's, have been demanding, thus far to no avail, mandatory quotas for female representation in parliament.

When women only occupy 10-15% of legislative seats, they usually have to act in sync with their male colleagues to survive politically. This is particularly true among the right-wing parties. For example, over the last four years, only one female AKP member, out of 45, submitted a parliamentary query.

Although women remain a small minority in politics, they are nonetheless making waves in parliament with bold and assertive demands along with some charming fashion statements. For example, on Nov. 17, Leyla Zana of the HDP recited her parliamentary oath in Kurdish. She also replaced the wording “Turkish nation” with “nation of Turkey.” Her oath was deemed invalid. Zana had sparked an even bigger crisis in 1991, when she became the first Kurdish female in parliament and tried then to recite her oath in Kurdish. Even those who disapprove of Zana’s latest revisions to the oath have expressed admiration for her persistence.

In 1999, Merve Kavakci became a symbol of courage and dignity in the parliament by refusing to take off her headscarf despite the ban on wearing one at the time. Kavakci and her family became the victims of brutal social bullying and ostracism. Again, even those who disapproved of Kavakci's action applauded her determination and courage. Today, her younger sister, Ravza Kavakci, is an AKP parliamentarian and wears a headscarf.

This past summer, Al-Monitor interviewed a female college student, Elif, about the role of women on the left. She made a poignant observation, stating, “When men are determined, they become leaders in politics. Yet, we are called shrill [when seeking the same]. With conservative leaders telling women not to laugh in public, not to go out to work, not even to utter words like 'vagina' or 'womb,' only shrill women have a voice. That is why we see our future in politics only as victims.” In a sad turn of events, Elif died five weeks after this interview, in the Oct. 10 peace rally bombings in Ankara.

Until Turkey adopts a political system that ensures a certain number of popularly elected seats for females, women will continue to be marginalized in society and government.